Looking Ahead to TESS

Thinking about the Kepler results now under discussion in these pages, one thing that stands out is that for most of the Kepler planets, we have no idea of their density. A transit can tell you about the size of the planet crossing in front of its star, but following up the detection with ground-based telescopes is crucial, because radial velocity studies can put some boundaries on its mass. With both size and mass in hand, you can determine the density, and that tells us whether a detected world is rocky like the Earth or a water world or an ice giant like Neptune.

In a recent interview with Popular Mechanics, David Latham (Harvard-Smithsonian Center for Astrophysics) described TESS, the Transiting Exoplanet Survey Satellite, and its role in the planet hunt beyond Kepler. With so many space observatories either cancelled (Space Interferometry Mission) or on indefinite hold (Terrestrial Planet Finder), it’s heartening to have this mission in the pipeline. And because TESS is going to be looking for planets transiting nearer, brighter stars than those available in the Kepler field — Kepler’s stars range from 600 to 3,000 light years from Earth — its targets will be easier to follow up with ground-based telescopes, so those all important mass measurements that lead to a planet’s density can be performed. 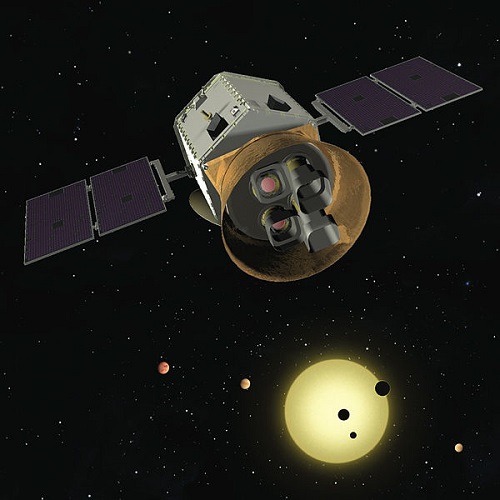 Image: An artist’s conception of the TESS mission, which will conduct an all-sky survey looking for transiting exoplanets. Credit: MIT Kavli Institute for Astrophysics & Space Research.

In a time of strapped budgets, Latham says the 100 man-years of work that went into the Kepler processing pipeline will be converted over to TESS, with much of the code re-used. The mission also gets an obvious boost from the experience Kepler has given us in processing vast amounts of data. TESS will be looking at the entire sky, making its field of view 400 times larger than Kepler, but it will spend about a month at a time on each location, with later follow-ups possible. Having identified the best candidate stars, TESS can turn the work over to space observatories like the James Webb Space Telescope or next generation instruments on the ground for the kind of deeper investigations that may one day characterize a small exoplanet’s atmosphere.

Think of TESS, then, as a spotter mission. In a backgrounder from the Kavli Institute for Astrophysics and Space Research (MIT), George Ricker discussed TESS’s role in finding targets that are suited for follow-up through optical and infrared telescopes. Ricker is interested in multi-planet systems that can be studied when one or more of the planets transit the host star. Their gravitational interactions cause slight changes by accelerating or decelerating these worlds in the course of their orbits, with even small planets that we can’t detect affecting the transit time of larger planets in the system. TESS should help here:

The TESS team calculates that their observatory could detect as many as 2700 planets, including perhaps hundreds of Earth-sized worlds. Ricker notes that while the passage of the Earth in front of the Sun as viewed from outside our Solar System would dim the light of our star by about 85 parts in a million, TESS will be sensitive to drops of roughly 40 parts in a million. The observatory will be studying approximately two million stars brighter than 12th magnitude, and that includes red dwarfs relatively near the Sun, targets to which the TESS researchers will be paying particular attention. Ricker again:

What we envision is that after two years we will complete a census of all the transiting extrasolar planets in the sky that have a period of less than about a month. This will be particularly valuable for studying the small M stars that are so abundant in our galaxy. We will have a good sample of planet periods extending out to about a year, and this will cover a wide variety of solar types – from stars that are hotter than the sun to stars that are a lot colder than the sun, and for which the habitable zones range from small distances from the stars to large distances from the stars.

All of that should be enough to provide the James Webb Space Telescope with plenty of targets, and offer a solid follow-up list to Earth-based observatories. Scheduled for launch in 2017, TESS was conceived from the ground up with the philosophy of using components from the commercial semiconductor industry that can be modified to work in space, with the CCDs onboard manufactured at MIT. Using components from the commercial sector rather than developing all instruments in-house keeps the costs down, achieving a launch slot for TESS when other missions have fallen victim to the budget ax. TESS is scheduled to fly in 2017 aboard an Orbital Sciences Pegasus XL rocket released from a Lockheed L-1011 aircraft.