Two Ways to the Stars

I often cite Robert Forward’s various statements to the effect that “Travel to the stars is difficult but not impossible.” Forward’s numerous papers drove the point home by examining star travel through the lens of known physics, conceiving of ways that an advanced civilization capable of the engineering could build an interstellar infrastructure. But while Forward was early in this game, so were Iosif S. Shklovskii and Carl Sagan. A Russian astronomer, Shklovskii had written a book’s whose Russian title translates roughly as ‘Universe, Life, Intelligence’ in 1962. Four years later, Sagan would join Shklovskii as co-author and the two would tackle the original book afresh, adding new material that reflected on and expanded the 1962 version’s ideas.

The result was the volume now called Intelligent Life in the Universe. I sometimes recommend books that are essential parts of a deep space library, and this is surely one, significant not only for its historical treatment of starflight but a compelling source of ideas even today. 1966 was early times for the interstellar idea, with the pioneering 1950s papers of Les Shepherd and Eugen Sänger still fresh in the memory; the work of Robert Bussard on ramjets that could move at a high percentage of the speed of light was very much in play. Shklovskii and Sagan thought there were two ways of achieving human interstellar flight, the first of which involved slowing down the human metabolism to allow it to survive long voyages. 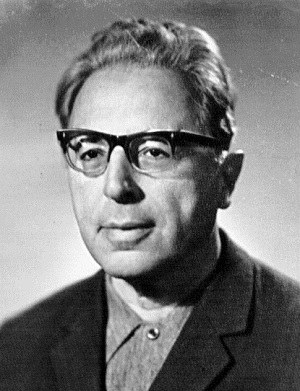 Automated interstellar probes were still a reach for most scientists in this era, but Shklovskii and Sagan thought that velocities of up to 100,000 kilometers per second — one-third the speed of light — were not beyond reach as our technology advanced. Given that, humans could be frozen for the duration and awakened upon arrival. The challenge was obvious: The density of ice is lower than the density of water, so that freezing a human being, who is composed largely of water, works serious damage to the cells during the freezing and thawing process. Delicate cell structures are disrupted in each case, and anti-freezing chemicals would kill the subject.

As so often in Intelligent Life in the Universe, Shklovskii and Sagan thought about possibilities that most in the scientific community hadn’t yet considered, particularly Sagan, whose contributions are flagged in the text to make it clear when he is speaking rather than Shklovskii. Sagan had been working with a Swedish biologist named Carl-Göran Hedén, who specialized in microbiology and biotechnology (Hedén would go on to become the founder of the first chair in biotechnology in Sweden, and the first president of the International Organisation for Biotechnology and Bioengineering). Sagan’s conversations with Hedén focused on the difference in density between water and ice, noting that at high pressures different crystal structures and different densities emerge, producing ice that may have applications for human freezing.

Thus a pressure of 3000 atmospheres and a temperature of -40 degrees Celsius turns ordinary ice into ice II, a kind of frozen water that has nearly the same density as the liquid. The conclusion seemed obvious to Sagan, who wrote:

If a human being could be safely brought to and maintained at an ambient pressure of several thousand atmospheres, and then quickly and carefully frozen to very low temperatures, it might be possible to preserve him for long periods of time. This is only one of many possible alternatives. It seems possible that by the time interstellar space vehicles with velocities of 1010 cm sec-1 are available, techniques for long-term preservation of a human crew will also be available.

Sagan thought that with these means, journeys of up to 100,000 years would be possible. A spacecraft moving at 100,000 kilometers per second could reach a star 1000 light years away in 3000 years, with whatever adjustments would be needed for acceleration and deceleration. A trip to the galactic core would take 60,000 years. He went on to say: “If such voyages are to be feasible, the lifetime of our civilization should perhaps exceed the length of the voyage. Otherwise, there will be no one to come home to.” True enough, but it’s hard to imagine coming back to Earth after 60,000 years thinking that the place you returned to would still be ‘home.’ 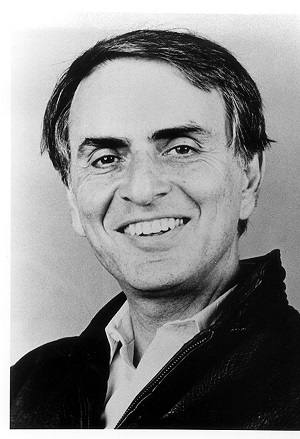 The second way to make manned interstellar missions happen was, Sagan believed, the use of relativistic spacecraft, which would, because of time dilation, act as a different kind of metabolic inhibitor. This was mind-boggling stuff back in the 1960s, though it followed as a consequence of the by then well established special theory of relativity. Continue to accelerate at 1 g and you reach the nearest stars in a few scant years of ship time. 21 years take you to the galactic center, while 28 years get you all the way to M31, the great galaxy of Andromeda. The ship nudges up ever closer to c, 300,000 kilometers per second, but never reaches it. Poul Anderson explored all this in his wonderful novel Tau Zero, which has blown minds and inspired science careers since it first appeared in Galaxy in 1967.

Shklovskii and Sagan saw such trips as a communications tool. A radio signal would take 2.5 million years to reach Andromeda, and another 2.5 million years would elapse before any possible response. At the time Intelligent Life in the Universe was being written, SETI seemed to solve the intractable propulsion problem by allowing us to ‘explore’ — i.e., to listen — with radio waves that move at the speed of light. Shklovskii and Sagan reversed the paradigm when it came to destinations well beyond the nearest stars. Now it would be actual journeys to these places that allowed a human presence to be known. As Sagan wrote:

…if relativistic interstellar spaceflight were used for such a mission, the crew would arrive at the galaxy in question after perhaps 30 years in transit, able not only to sing the songs of distant Earth, but to provide an opportunity for cosmic discourse with inhabitants of a certainly unique and possibly vanished civilization. Despite the dangers of the passage and the length of the voyage, I have no doubt that qualified crew for such missions could be mustered. Shorter, round-trip journeys to destinations within our Galaxy might prove even more attractive. Not only would the crews voyage to a distant world, but they would return in the distant future of their world, an adventure and a challenge certainly difficult to duplicate.

Surely this passage is the source of the title for Arthur Clarke’s The Songs of Distant Earth, published in 1986, which explores the effects of long-term interstellar flight. Addendum: See Adam Crowl’s comment below — the influence evidently flowed the other way. My mistake. 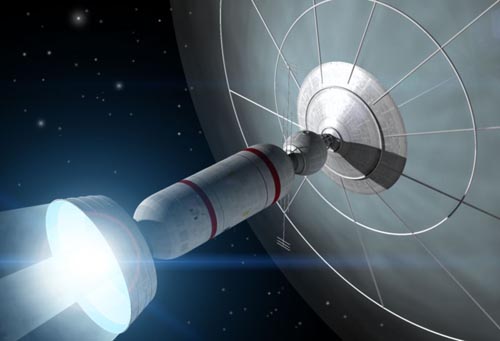 Given that reaching M31 within the lifetime of a human crew would require a velocity of 0.99999 c, the only solution that fit the bill was Robert Bussard’s interstellar ramjet, which feeds off the interstellar medium to gorge itself with reaction mass, burning a fusion torch aboard a vessel that becomes more efficient the faster it moves. Sagan liked the Bussard concept and thought it violated no physical principles — he even expected it to be achieved in prototype form in no less than a century — but as we’ve seen (see Catalyzed Fusion: Tuning Up the Ramjet), the problems of lighting proton-proton fusion are immense, and so are issues of drag.

Much work would go into demonstrating this in the next few decades, obviously unknown to Shklovskii and Sagan in 1966, but Bussard variants using a catalytic cycle called the CNO bi-cycle (carbon-nitrogen-oxygen) are still intriguing, and as you might imagine, we’re not through with them here on Centauri Dreams. We can take Shklovskii and Sagan as our models. Both had a taste for bold venturing and pushing the limits of possibility, a taste confirmed in their choice of epigram to introduce the book, Pindar’s Six Nemean Ode:

There is one
race of men, one race of gods; both have breath
of life from a single mother. But sundered power
holds us divided, so that the one is nothing, while for the
other the brazen sky is established
their sure citadel forever. Yet we have some likeness in great
intelligence, or strength, to the immortals,
though we know not what the day will bring, what course
after nightfall
destiny has written that we must run to the end.