Although John Jacob Astor IV did many things in his life — as a businessman, builder, Spanish American War veteran and financier — his place in history was secured with his death on the Titanic in 1912. His was actually one of the three hundred or so bodies that were later recovered out of over 1500 who died, and he is buried in Trinity Church Cemetery in New York City. Less well known is the fact that Astor was a writer who, in 1894, produced a science fiction novel called A Journey to Other Worlds in which people travel to the outer planets. 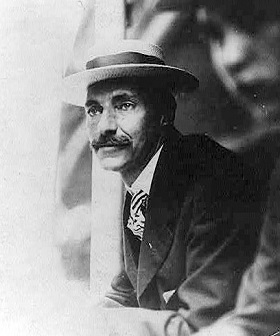 I’ve been digging around in this curious novel and discovered an interstellar reference that was entirely new to me. Using a form of repulsive energy called ‘apergy,’ variants of which were much in vogue in the scientific romances of this era (think H. G. Wells’ The First Men in the Moon, which uses gravity-negating ‘cavorite’), Astor’s crew sets out on the Callisto to explore Jupiter and Saturn, where various adventures ensue. Along the way, his travelers see Mars’ moons Deimos and Phobos and begin to speculate:

“Either of those,” said Bearwarden, looking back at the little satellites, “would be a nice yacht for a man to explore space on. He would also, of course, need a sun to warm him, if he wished to go beyond this system, but that would not have to be a large affair–in fact, it might be smaller than the planet, and could revolve about it like a moon.”

Bearwarden’s companion Cortlandt thinks this over and decides an object as small as Deimos couldn’t maintain an atmosphere. Better, then, to create a small sun and travel along with it in a spacecraft rather than a moon or asteroid:

“It would be better, therefore, to have such a sun as you describe and accompany it in a yacht or private car like this, well stocked with oxygen and provisions. When passing through meteoric swarms or masses of solid matter, collision with which is the most serious risk we run, the car could follow behind its sun instead of revolving around it, and be kept from falling into it by partially reversing the attraction. As the gravitation of so small a sun would be slight, counteracting it for even a considerable time would take but little from the batteries.”

Conspicuously left out of the discussion is how such a small ‘sun’ would be powered, but we can forgive Astor for not anticipating Hans Bethe’s 1939 work on how fusion powers stars. Instead, he has a third character muse about creating a violent collision between two asteroids that would cause the new-made object to become luminous, which pleases an enraptured Bearwarden: “Bravo!” said Bearwarden. “There is no limit to what can be done. The idea of our present trip would have seemed more chimerical to people a hundred years ago than this new scheme appears now.”

Science fiction author and critic Richard Lupoff has speculated that Astor drew ‘apergy’ from Percy Greg’s 1880 novel Across the Zodiac, in which an anonymous narrator uses a kind of anti-gravity to travel to Mars aboard a spectacularly large spacecraft. In any case, Astor’s novel is fun to dip into in places, offering in addition to space travel a look at the world of 2000, a time in which the great project on Earth is to shift the planet’s axis, a job undertaken by the Terrestrial Axis Straightening Company to eliminate the extremes of Earth’s climate.

An Early Look at Suspended Animation

Lupoff’s book Master of Adventure is the source of his thinking on Astor. It’s also a delightful read for anyone interested in the life and works of Edgar Rice Burroughs, who came startlingly to mind after I wrote last Monday’s entry on Carl Sagan and Iosif S. Shklovskii (see Two Ways to the Stars). The duo had speculated in their book Intelligent Life in the Universe that high pressures and controlled temperatures could be the key to freezing humans for long transit times, taking advantage of ice II, which has about the same density as liquid water, as opposed to normal ice, which could disrupt human cells in the freezing and thawing process. 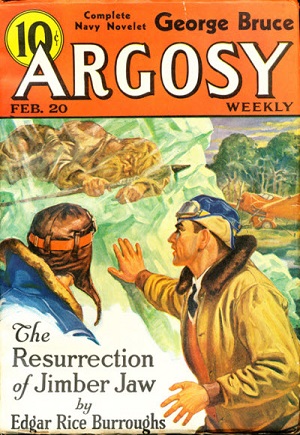 I suddenly recalled an old Burroughs story called “The Resurrection of Jimber Jaw,” which ran in Argosy in 1937 — it was later reprinted by Lupoff himself for Canaveral Press in Tales of Three Planets. Burroughs’ characters, forced to land their plane in Siberia after mechanical trouble, find the frozen body of a caveman who is eventually returned to life. His adventures in America — he becomes a professional wrestler! — lead to an unhappy romance and he winds up re-freezing himself in a meat locker, asking not to be re-awakened. But before then, he gets off a number of comments about modern life that would not sit well with today’s sensibilities.

Various forms of freezing and suspended animation populate early science fiction going back to 18th Century romances like L. S. Mercier’s Memoirs of the Year Two Thousand Five Hundred and moving forward to H. G. Wells’ When the Sleeper Wakes (1899). Robert Heinlein would use suspended animation to great effect in one of my favorite of his novels, The Door Into Summer (1957), but magazine science fiction is packed with stories using the trope. There is Laurence Manning’s “The Man Who Awoke” (Wonder Stories 1933) and A. E. van Vogt’s classic “Far Centaurus” (Astounding, 1944), where the protagonists survive a long voyage only to learn that faster than light travel has been invented while they were enroute.

Recently Adam Crowl looked back to rocket pioneer Robert Goddard’s thoughts on suspended animation. In a short note titled “The Ultimate Migration,” written in 1918, Goddard had seen two ways for humans to reach the stars, the first being the use of atomic energy to accelerate an asteroid that had been hollowed out to serve as a spaceship. But if this didn’t work, tinkering with human cells might do the trick:

…will it be possible to reduce the protoplasm in the human body to the granular state, so that it can withstand the intense cold of interstellar space? It would probably be necessary to dessicate the body, more or less, before this state could be produced. Awakening may have to be done very slowly. It might be necessary to have people evolve, through a number of generations, for this purpose. 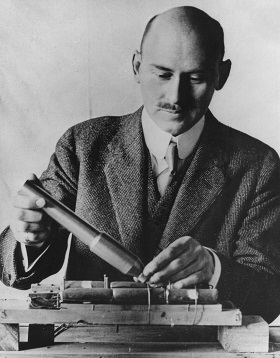 Goddard goes on to speculate about an immense journey in which the pilot is ‘animated’ once every 10,000 years, or at even longer intervals for longer journeys, so he can correct the spacecraft’s course. He also addresses the issue of how to build a clock that would survive such long time-frames and control the re-awakening of the pilot. The question of long-lived time-pieces is, of course, one that’s under intense investigation at the Long Now Foundation, which is engaged in the process of building a 10,000 Year Clock in the mountains of west Texas, a project conceived by Danny Hillis in which Amazon’s Jeff Bezos has already invested some $42 million.

Even 10,000 years might not seem long-term compared to some of the journeys Goddard contemplated. And what if we aren’t the only intelligence that sets about creating such missions? Adam Crowl closes his post with this intriguing thought:

…the idea of flying between the stars as mummified cryogenic life-forms has a strange allure. To travel the stars so, we would needs become like human-sized ‘tardigrades’ or ‘brine-shrimp’, both of which can undergo reversible cryptobiosis in a mostly dessicated state. Even if we can’t do so (reversibly – it’s not too difficult to make it permanent), might there not be intelligences “Out There” who have done so? What if we found one of their slow sail-ships? Would it seem like a funerary barge, filled with strange freeze-dried corpses?

There’s fodder here for more than a few science fiction stories, the creation of which is an impulse that runs through the entirety of our post-Enlightenment encounter with technology. We plug in the science of our own time in making the attempt to sketch out a future, knowing all too well that we’re only guessing at the discoveries that could change all our assumptions. That’s why I love the rich history of science fiction. It’s a genre that lets us try ideas on for size and work them through to their consequences, all the while reminding us of how much we have to learn.