The Star as Starship

Moving entire stars rather than building spaceships would have certain benefits as a way of traveling through the galaxy. After all, it would mean taking your local environment with you on a millennial journey. Some have suggested it might therefore be an observable sign of highly advanced civilizations at work. But how would you move a star in the first place?

In Bowl of Heaven (Tor, 2012), Gregory Benford and Larry Niven conceive of a vast bowl — think of one-half of a Dyson sphere — wrapped around a star whose energies are directed into a propulsive plasma jet that, over aeons, moves the structure forward. Thus this snippet of dialogue, said aboard a starship by the humans who discover the alien artifact:

“…You caught how the jet bulges out near the star.”

More hand waving. “Looks to me like the magnetic fields in it are getting control, slimming it down into a slowly expanding straw…”

“A wok with a neon jet shooting out the back…and living room on the inside, more territory than you could get on the planets of a thousand solar systems. Pinned to it with centrifugal grav…”

“They don’t live on the whole bowl. Just the rim. Most of it is just mirrors. Even so, it’s more than a habitat,” said Cliff. “It’s accelerating. That jet? This whole thing is going somewhere. A ship that is a star. A ship star…”

The Benford/Niven excursion into mega-engineering came to mind over the weekend when I read Keith Cooper’s recent article for the Institute for Interstellar Studies on the ideas of Fritz Zwicky. The wildly creative astrophysicist (1898-1974) once imagined a scheme that would use the Sun as an engine that could propel us — and I do mean all of us — to Alpha Centauri. The notion was to induce ‘hot spots’ in the solar photosphere that would lead to asymmetrical flares, nudging the Sun in a new direction. Zwicky imagined that the recoil of these directed exhaust jets would make an interstellar crossing in about fifty centuries possible, pulling the Earth along with our parent star.

In a lecture in 1948, Zwicky referred to ideas like these as ‘morphological astronomy,’ which he would go on to discuss in detail in his 1969 book Discovery, Invention, Research Through the Morphological Approach, a title that ranges over everything from telescope design to aerodynamics and the concept of justice. But as Cooper notes, a number of questions are left unanswered, including details of the asymmetric thrust mechanism itself, and the always interesting question of deceleration. Just how does the Sun approach Alpha Centauri, and what effects would the move have on solar planets as well as those around the destination stars?

If a highly advanced civilization did have the ability to engineer stellar acceleration, we might spot its efforts through unusually high proper motions of particular stars. So-called ‘hypervelocity stars’ have been observed that appear to be gravitationally unbound to the Milky Way. In fact, Kelly Holley-Bockelmann and Lauren Palladino (Vanderbilt University) have identified 675 stars that were probably ejected from the galactic core, presumably because of gravitational interactions with the supermassive black hole at galactic center. Moving at velocities as high as 900 kilometers per second, stars like these would take 10 million years to travel from the core to the outer edge of the spiral. The stars in question tend to be red giants with high metallicity. Later work at Ohio State has identified a small number of hypervelocity stars with masses closer to that of the Sun. 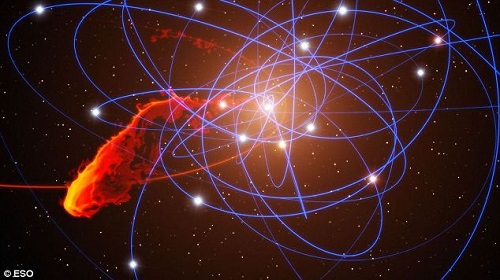 Image: Hypervelocity stars zoom around the center of the Milky Way, where a supermassive black hole lurks. Credit: ESO/MPE.

Cooper asks whether stars with anomalous proper motion might not be worth investigating in a SETI context. From his essay:

Perhaps some advanced extraterrestrial civilisation out there has that power. Maybe we should look to stars with anomalously large proper motions. Is Barnard’s Star, which has the highest proper motion of any star in the sky at 10.3 arcseconds per year, at its distance of 5.98 light years, simply a refugee ejected from a binary star system or is it being deliberately driven? Astronomers even observed a giant flare on the star in 1998, which reached temperatures as high as 8,000 degrees Celsius, which is 2,500 degrees Celsius hotter than the Sun’s surface, or photosphere. Given that Barnard’s Star is a red dwarf with an average surface temperature typically languishing at 2,860 degrees Celsius, that’s a heck of an increase. Now, I’m not suggesting that extraterrestrials are using Barnard’s Star as a spacecraft, only that should such a feat be possible (and that’s a big if), we might expect it to look something akin to the speeding red dwarf.

The idea of moving entire stars as a means of interstellar travel is intriguing and might fall into our toolbox of ideas on ‘interstellar archaeology,’ the search for unusual artifacts in our astronomical data. After all, moving a star simply ramps up an already existing process. We’re all on a grand tour through the Milky Way as the Sun moves at a brisk 220 kilometers per second in its orbit. An advanced civilization with clearly defined destinations in mind might find random encounters with other stars less interesting than targeted travel.