The Stars in their Courses

Here’s hoping Centauri Dreams readers in the States enjoyed a restful Thanksgiving holiday, though with travel problems being what they are, I often find holidays can turn into high-stress drama unless spent at home. Fortunately, I was able to do that and, in addition to a wonderful meal with my daughter’s family, spent the rest of the time on long-neglected odds and ends, like switching to a new Linux distribution (Mint 16 RC) and fine-tuning it as the platform from within which I run this site and do other work (I’ve run various Linux flavors for years and always enjoy trying out the latest release of a new version).

Leafing through incoming tweets over the weekend, I ran across a link to Stephen Cass’ article in IEEE Spectrum on Plotting the Destinations of 4 Interstellar Probes. We always want to know where things are going, and I can remember digging up this information with a sense of awe when working on my Centauri Dreams book back around 2002-2003. After all, the Voyagers and the Pioneers we’ve sent on their journeys aren’t going to be coming back, but represent the first spacecraft we’ve sent on interstellar trajectories.

And if the Pioneers have fallen silent, we do have the two Voyagers still sending back data, as they will for another decade or so, giving us a first look at the nearby interstellar medium. For true star traveling, of course, even these doughty probes will fall silent at the very beginning of their journeys. Voyager 1 is headed on a course that takes it in the rough direction of the star AC+79 3888 (Gliese 445), a red dwarf 17.6 light years away in the constellation Camelopardalis. Here’s the star chart the IEEE Spectrum ran to show Voyager 1’s path — the article offers charts for the other interstellar destinations as well, but I’ll send you directly to it for those. 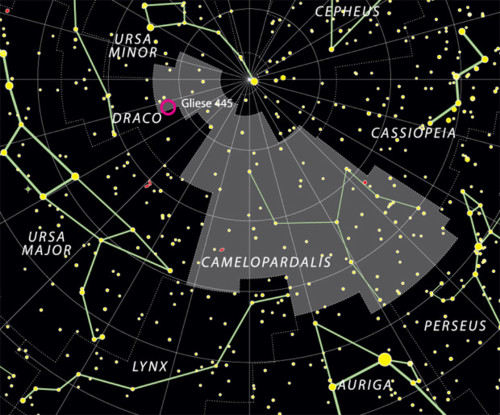 Notice anything interesting about Voyager 1? The IEEE Spectrum article says the spacecraft will pass within 1.6 light years of the star in 40,000 years, and indeed, this is a figure you can find mentioned in two authoritative papers: Rudd et al., “The Voyager Interstellar Mission” (Acta Astronautica 40, pp. 383-396) and Cesarone et al. ,”Prospects for the Voyager Extra-Planetary and Interstellar Mission” (JBIS 36, pp. 99-116). NASA used the 40,000 year figure as recently as September, when Voyager project manager Suzanne Dodd (JPL) spoke of the star to Space.com: “Voyager’s on its way to a close approach with it in about 40,000 years.” I used the figure as well in my Centauri Dreams book.

But wait: I’ve often cited how long it would take Voyager 1 to get to Alpha Centauri if it happened to be aimed in that direction. The answer, well over 70,000 years, is obviously much longer than the 40,000 years NASA is citing to get to the neighborhood of Gliese 445. How can this be? After all, Voyager 1 is moving at 17 kilometers per second, and should take 17,600 years to travel one light year. In 40,000 years, it should be a little over 2 light years from Earth.

I’m drawing these numbers from Voyager 1 and Gliese 445, a fascinating piece that ran in the Math Encounters Blog in September of this year. The author, listed as ‘an engineer trying to figure out how the world works,’ became interested in Voyager 1’s journey and decided to work out the math. It turns out NASA is right because the star Gliese 445 is itself moving toward the Solar System at a considerable clip, about 119 kilometers per second. Gliese 445 should be making its closest approach to the Solar System approximately 46,000 years from now, closing to within 3.485 light years, a good deal closer than the Alpha Centauri stars are today.

Never forget, in other words, that we’re dealing with a galaxy in constant motion! Voyager 1’s sister craft makes the same point. It’s headed toward the red dwarf Ross 248, 10 light years away but also moving briskly in our direction. In fact, within 36,000 years, the star should have approached within 3.024 light years, much closer indeed than Proxima Centauri. Voyager 2, headed outbound at roughly 15 kilometers per second, thus closes on Ross 248 in about the same time as Voyager 1 nears Gliese 445, 40,000 years. Voyager 2 then presses on in the direction of Sirius, but 256,000 years will have gone by before it makes its closest approach.

As for the Pioneers, Pioneer 10 is moving in the direction of Aldebaran, some 68 light years out, and will make its closest approach in two million years, while Pioneer 11 heads toward Lambda Aquilae, an infant star (160 million years old) some 125 light years away, approaching it four million years from now. We could throw New Horizons into the mix, but remember that after the Pluto/Charon encounter, mission controllers hope to re-direct the craft toward one or more Kuiper Belt objects, so we don’t know exactly where its final course will take it. Doubtless I’ll be able to update this article with a final New Horizons trajectory a few years from now. Until then, be sure to check out the IEEE star charts for a graphic look at these distant destinations.

Previous post: Is Energy a Key to Interstellar Communication?