Can Kepler be Revived?

Never give up on a spacecraft. That seems to be the lesson Kepler is teaching us, though it’s one we should have learned by now anyway. One outstanding example of working with what you’ve got is the Galileo mission, which had to adjust to the failure of its high-gain antenna. The spacecraft’s low-gain antenna came to the rescue, aided by data compression techniques that raised its effective data rate, and sensitivity upgrades to the listening receivers on Earth. Galileo achieved 70 percent of its science goals despite a failure that had appeared catastrophic, and much of what we’ve learned about Europa and the other Galilean satellites comes from it. 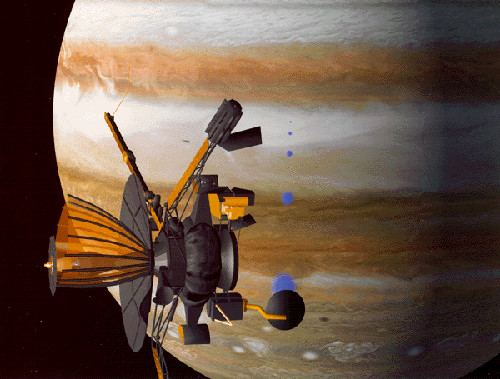 Image: Galileo at Jupiter, still functioning despite the incomplete deployment of its high gain antenna (visible on the left side of the spacecraft). The blue dots represent transmissions from Galileo’s atmospheric probe. Credit: NASA/JPL.

Can we tease more data out of Kepler? The problem has been that two of its four reaction wheels, which function like gyroscopes to keep the spacecraft precisely pointed, have failed. Kepler needs three functioning wheels to maintain its pointing accuracy because it is constantly being bathed in solar photons that can alter its orientation. But mission scientists and Ball Aerospace engineers have been trying to use that same issue — solar photons and the momentum they impart — to come up with a mission plan that can still operate.

You can see the result in the image below — be sure to click to enlarge it for readability. By changing Kepler’s orientation so that the spacecraft is nearly parallel to its orbital path around the Sun, mission controllers hope to keep the sunlight striking its solar panels symmetric across its long axis. We may not have that third reaction wheel, but we do have the possibility of this constant force acting as a surrogate. Re-orientation of the probe four times during its orbit will be necessary to keep the Sun out of its field of view. And the original field of view in the constellations of Cygnus, Lyra and Draco gives way to new regions of the sky.

Testing these methods, mission scientists have been able to collect data from a distant star field of a quality within five percent of the primary mission image standards. That’s a promising result and an ingenious use of the same photon-imparted momentum that’s used in the design of solar sails like JAXA’s IKAROS and the upcoming Sunjammer sail from NASA. We now continue with testing to find out whether this method will work not just for hours but for days and weeks. 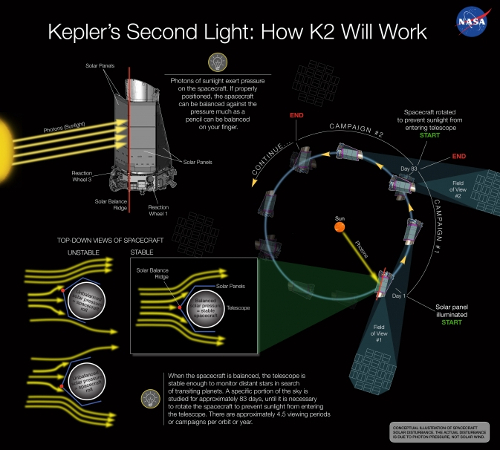 If a decision is made to proceed, the revised mission concept, called K2, will need to make it through the 2014 Senior Review, in which operating missions are assessed. We should expect further news by the end of 2013 even as data from the original mission continue to be analyzed.

All of this may take you back to the Mariner 10 mission to Mercury in 1973, itself plagued by problems. Like Galileo, its high-gain antenna malfunctioned early in the flight, although it would later come back to life, and like Kepler, Mariner 10 proved difficult to stabilize. Problems in its star tracker caused the spacecraft to roll, costing it critical attitude control gas as it tried to stabilize itself. The guidance and control team at the Jet Propulsion Laboratory was able to adjust the orientation of Mariner 10’s solar panels, testing various tilt angles to counter the spacecraft’s roll. It was an early demonstration of the forces at work in solar sails.

We can hope that ingenuity and judicious use of solar photons can also bring Kepler back to life in an extended mission no one would have conceived when the spacecraft was designed. What we’ll wind up with is about 4.5 viewing periods (‘campaigns’) per orbit of the Sun, each with its own field of view and the capability of studying it for approximately 83 days. As the diagram shows, the proper positioning of the spacecraft to keep sunlight balanced on its solar panels is crucial. It’s a tricky challenge but one that could provide new discoveries ahead.

Addendum, from a news release just issued by NASA:

Based on an independent science and technical review of the Kepler project’s concept for a Kepler two-wheel mission extension, Paul Hertz, NASA’s Astrophysics Division director, has decided to invite Kepler to the Senior Review for astrophysics operating missions in early 2014.

The Kepler team’s proposal, dubbed K2, demonstrated a clever and feasible methodology for accurately controlling the Kepler spacecraft at the level of precision required for scientifically valuable data collection. The team must now further validate the concept and submit a Senior Review proposal that requests the funding necessary to continue the Kepler mission, with sufficient scientific justification to make it a viable option for the use of NASA’s limited resources.

To be clear, this is not a decision to continue operating the Kepler spacecraft or to conduct a two-wheel extended mission; it is merely an opportunity to write another proposal and compete against the Astrophysics Division’s other projects for the limited funding available for astrophysics operating missions.