When the pace of discovery is as fast as it has been in the realm of exoplanet research, we can expect to have our ideas challenged frequently. The latest instance comes in the form of a gas giant known as HD 106906 b, about eleven times as large as Jupiter in a young system whose central star is only about 13 million years old. It’s a world still glowing brightly in the infrared, enough so to be spotted through direct imaging, about which more in a moment. For the real news about HD 106906 b is that it’s in a place our planet formation models can’t easily explain. 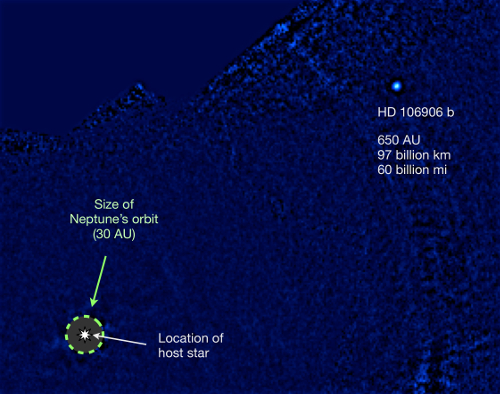 Image: This is a discovery image of planet HD 106906 b in thermal infrared light from MagAO/Clio2, processed to remove the bright light from its host star, HD 106906 A. The planet is more than 20 times farther away from its star than Neptune is from our Sun. AU stands for Astronomical Unit, the average distance of the Earth and the Sun. (Image: Vanessa Bailey).

Start with the core accretion model and you immediately run into trouble. Core accretion assumes that the core of a planet like this forms from the accretion of small bodies of ice and rock called planetesimals. The collisions of these objects bulk up the core, which then attracts an outer layer of gas. The problem with applying this model to HD 106906 b is that it’s about 650 AU from its star, far enough out that the core doesn’t have enough time to form before radiation from the hot young star dissipates the already thin gas of the outer protoplanetary disk. Get beyond 30 AU or so and it gets harder and harder to explain how a gas giant forms here.

Gravitational instability is the key to the other major theory of planet formation, but it’s challenged by HD 106906 b as well. Here the instabilities in a dense debris disk cause it to collapse into knots of matter, a process that can theoretically form planets in mere thousands rather than the millions of years demanded by core accretion. But at distances like 650 AU, there shouldn’t be enough material in the outer regions of the protoplanetary disk to allow a gas giant to form.

Grad student Vanessa Bailey (University of Arizona), lead author on the paper presenting this work, describes one of two alternative hypotheses that could explain the planet’s placement:

“A binary star system can be formed when two adjacent clumps of gas collapse more or less independently to form stars, and these stars are close enough to each other to exert a mutual gravitational attraction and bind them together in an orbit. It is possible that in the case of the HD 106906 system the star and planet collapsed independently from clumps of gas, but for some reason the planet’s progenitor clump was starved for material and never grew large enough to ignite and become a star.”

Making this explanation problematic is the fact that the mass ratio of the two stars in a binary system is usually more like 10 to 1 rather than this system’s 100 to 1, but the fact that the remnants of HD 106906’s debris disk are still observable may prove useful in untangling the mystery. A second formation mechanism suggested for planets at this distance from their star is that the planet may have formed elsewhere in the disk and been forced into its current position by gravitational interactions. The preprint notes the problem with this scenario:

Scattering from a formation location within the current disk is unlikely to have occurred without disrupting the disk in the process… We also note that the perturber must be > 11 MJup; we do not detect any such object beyond 35 AU…, disfavoring formation just outside the disk’s current outer edge. While it is possible that the companion is in the process of being ejected on an inclined trajectory from a tight initial orbit, this would require us to observe the system at a special time, which is unlikely. Thus we believe the companion is more likely to have formed in situ in a binary-star-like manner, possibly on an eccentric orbit.

HD 106906 b was found through deliberate targeting of stars with unusual debris disks in the hope of learning more about planet/disk interactions. The team used the Magellan Adaptive Optics system and Clio2 thermal infrared camera mounted on the Magellan telescope in Chile. The Folded-Port InfraRed Echellette (FIRE) spectrograph at Magellan was then used to study the planetary companion. The Magellan data were compared to Hubble Space Telescope data taken eight years earlier to confirm that the planet is indeed moving with the host star.

This unusual gas giant thus joins the small but growing group of widely separated planetary-mass companions and brown dwarf companions that challenge our planet formation models. The massive, ring-like debris disk around HD 106906 helps us constrain the formation possibilities, but we’ll need more data from systems whose disk/planet interactions can be observed before we can speak with any confidence about the origin of these objects.

The paper is Bailey et al., “HD 106906 b: A planetary-mass companion outside a massive debris disk,” accepted at The Astrophysical Journal Letters and available as a preprint. This University of Arizona news release is also useful.