Encounter with a Blue/Green Planet

When I first read about Project Daedalus all those many years ago, I remember the image of a probe passing through a planetary system, in this case the one assumed to be around Barnard’s Star, at high velocity, taking measurements all the way through its brief encounter. And wouldn’t it be a fabulous outcome if something rare happened, like the reception of some kind of radio activity or some other sign of intelligent life on one of the planets there? That thought stayed with me when, much later, I read Greg Matloff and Eugene Mallove’s The Starflight Handbook and began thinking seriously about interstellar flight.

The chance of making such a detection would be all but non-existent if we just chose a destination at random, but by the time we get to actual interstellar spacecraft, we’ll also have an excellent idea — through space- and Earth-based instruments — about what we might find there. These days that ETI detection, while always interesting, isn’t at the top of my list of probabilities, but getting a close-up view of a world with an apparent living environment at whatever stage of evolution would be a stunning outcome. Let’s hope our descendants see such a thing.

Triggering these musings was a space event much closer to home, the recent passage of the Juno spacecraft, which moved within 560 kilometers of the Earth’s surface on October 9 in a gravity assist maneuver designed to hasten its way to a 2016 encounter with Jupiter. Juno will orbit the giant planet 33 times, studying its northern and southern lights and passing through the vast electrical fields that generate them. I was fascinated to see that the recent close pass marked a milestone of sorts, for the spacecraft detected a shortwave message sent by amateur radio operators on Earth. 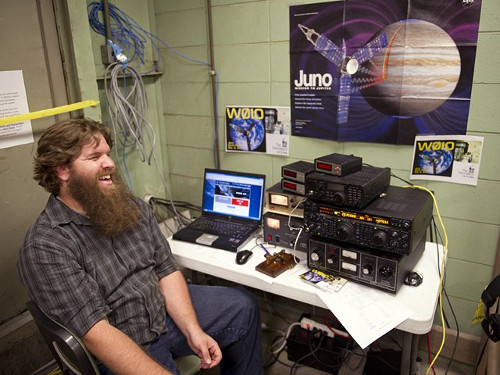 Image: Tony Rogers, the president of the University of Iowa ham radio club, mans the equipment used to send a message to the Juno spacecraft in October. The simple message “Hi” was sent repeatedly by ham radio operators around the world. Photos by Tim Schoon.

It’s not a starship picking up an alien civilization’s signals, but Juno did something that previous missions like Galileo and Cassini were unable to do. The latter were able to detect shortwave radio transmissions during their own Earth encounters, but it was not possible to decode intelligent information from the data they acquired. The Waves instrument on Juno, built at the University of Iowa, collected enough data that a simple Morse code message from amateur radio operators could be decoded, leading Bill Kurth, lead investigator for the Waves instrument, to say “We believe this was the first intelligent information to be transmitted to a passing interplanetary space instrument, as simple as the message may seem.”

The Juno team evaluated the Waves instrument data after the October 9 flyby and noted that the message appeared in the data when the spacecraft was still over 37,000 kilometers from Earth. The University of Iowa Amateur Radio Club contacted hundreds of ham stations in 40 states and 17 countries as part of the effort, which was managed through a website and a temporary station set up at the university. Operators from every continent coordinated transmissions carrying the same coded message, with results that can be heard in this video. As public outreach for an ongoing mission, this is prime stuff. Kurth continues:

“This was a way to involve a large number of people—those not usually associated with Juno—in a small portion of the mission. This raises awareness, and we’ve already heard from some that they’ll be motivated to follow the Juno mission through its science phase at Jupiter.”

Also qualifying as excellent public relations is the image below, which came as one of Juno’s sensors offered a low-resolution look at what a fast passage by our planet would be like.

Image: This cosmic pirouette of Earth and our moon was captured by the Juno spacecraft as it flew by Earth on Oct. 9, 2013. Image Credit: NASA/JPL-Caltech.

“If Captain Kirk of the USS Enterprise said, ‘Take us home, Scotty,’ this is what the crew would see. In the movie, you ride aboard Juno as it approaches Earth and then soars off into the blackness of space. No previous view of our world has ever captured the heavenly waltz of Earth and moon.”

Getting these images wasn’t easy. The sensors involved, cameras designed to track faint stars, are part of Juno’s Magnetic Field Investigation (MAG) and are normally used to adjust the orientation of the spacecraft’s magnetic sensors. The spacecraft was spinning at 2 rpm during the encounter, so a frame was captured each time the cameras were facing the Earth, with the results processed into video format. Juno now moves on to a Jupiter arrival on July 4 of 2016. If you want to see the Earth flyby with musical accompaniment, see this video and ponder what John Jørgensen (Danish Technical University), who designed the star tracker, says about the event: “Everything we humans are and everything we do is represented in that view.”

Rings a bell, doesn’t it? And why not. This is indeed another of those ‘pale blue dot’ moments.