Europa: Minerals from an Ancient Impact?

Europa continues to fascinate those hopeful of finding life elsewhere in our Solar System, and it’s easy to see why. Consider everything the Jovian moon has going for it. Although it’s a long way from the Sun (Jupiter is 5 AU out), Europa gets internal heat from its interactions with the gravitational well around Jupiter, which causes the moon to be stretched and squeezed. We have an ocean whose occasional eruptions into the ice above allow mixing with surface materials and, as this JPL news release points out, salts on the surface that create an energy gradient. These factors have been in place on Europa since the moon first formed.

Now an analysis of data from the Galileo mission has turned up something else needed for life: The likelihood of organic materials. The assumption has been that comet or asteroid impacts could provide these, and the data that Jim Shirley (JPL) will discuss tomorrow at the American Geophysical Union meeting in San Francisco show the presence of clay-type minerals on the moon, assumed to have been delivered by just such a collision. Says Shirley:

“Organic materials, which are important building blocks for life, are often found in comets and primitive asteroids. Finding the rocky residues of this comet crash on Europa’s surface may open up a new chapter in the story of the search for life on Europa.” 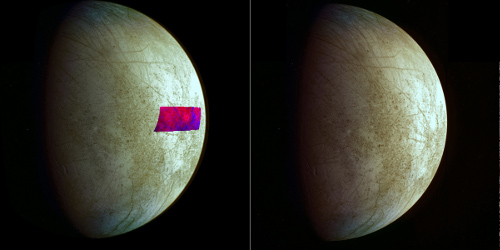 Image: This image, using data from NASA’s Galileo mission, shows the first detection of clay-like minerals on the surface of Jupiter’s moon Europa. The clay-like minerals appear in blue in the false-color patch of data from Galileo’s Near-Infrared Mapping Spectrometer. Surfaces richer in water ice appear in red. The background image is a mosaic of images from Galileo’s Solid State Imaging system in the colors that human eyes would see. A version of the image without the infrared area is on the right. Credit: NASA/JPL.

The pattern of the detected minerals gives us some idea about the impactor that brought them. Shirley’s work suggests an asteroid about 1100 meters across or a comet about 1700 meters in size, either of these striking at a shallow angle. The minerals, called phyllosilicates, showed up in near-infrared images from Galileo, appearing as a broken ring about 40 kilometers wide that is 120 kilometers from the center of a central crater site. We’re probably looking at the backsplash of ejected materials from a strike at an angle of about 45 degrees or more off the vertical — a head-on collision would have vaporized the impactor or driven its materials below the surface.

All this assumes, however, that the organic materials did not come from Europa’s interior in the first place. The JPL news release notes that this is unlikely because of the thickness of the icy crust over Europa’s ocean, assumed to be as much as 100 kilometers thick. But the thickness of that crust is still the cause of some controversy, and for that I turn you to Unmasking Europa: Of Ice and Controversy, which looks at Richard Greenberg’s book on the moon and discusses surface features that may indicate a much thinner crust. What we obviously need to make this call is more information, and that may translate into a Europa mission with lander capabilities.