Last week’s look at Europa examined the possibility of primordial impacts there that might have brought organic materials to the moon, focusing especially on clay-like minerals that a JPL team found in data from the Galileo mission. I had barely finished that article before the news from Hubble arrived with observations of water vapor above the southern pole of Europa, a possible indication of water plumes erupting from the moon’s surface. That work ran in Science Express and was reported at the meeting of the American Geophysical Union in San Francisco. Lead author Lorenz Roth (Southwest Research Institute) described it this way:

“By far the simplest explanation for this water vapor is that it erupted from plumes on the surface of Europa. If those plumes are connected with the subsurface water ocean we are confident exists under Europa’s crust, then this means that future investigations can directly investigate the chemical makeup of Europa’s potentially habitable environment without drilling through layers of ice. And that is tremendously exciting.”

Exactly so, for now we can start thinking about doing something similar to what has been envisioned at Enceladus, flying a spacecraft through a plume to study what’s below the ice. As the comments on last Thursday’s post (Europa: Minerals from an Ancient Impact) have shown, the question of ice thickness on Europa is wide open, and scientists studying the matter are divided on it — once again I point you to Richard Greenberg’s Unmasking Europa (Copernicus, 2008) for a lively defense of thin ice. 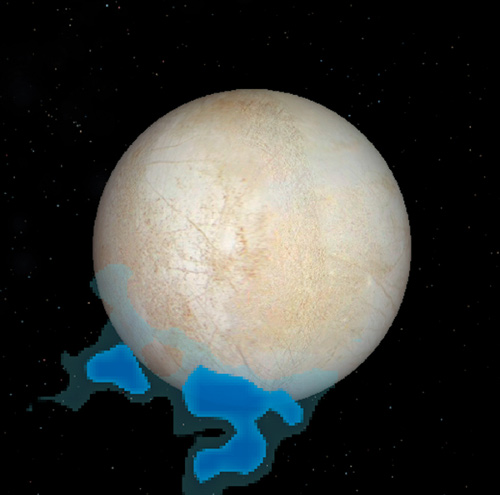 Image: This graphic shows the location of water vapor detected over Europa’s south pole that provides the first strong evidence of water plumes erupting off Europa’s surface, in observations taken by NASA’s Hubble Space Telescope in December 2012. Hubble didn’t photograph plumes, but spectroscopically detected auroral emissions from oxygen and hydrogen. The aurora is powered by Jupiter’s magnetic field. This is only the second moon in the solar system found ejecting water vapor from the frigid surface. The image of Europa is derived from a global surface map generated from combined NASA Voyager and Galileo space probe observations. Credit: NASA, ESA, and L. Roth (Southwest Research Institute and University of Cologne, Germany).

Geysers on Europa could indeed be a signature of a thin ice crust, but as reader Andrew Tribick has noted here, they could also flag a lake enclosed within a thick crust. The key question, of course, is just where the water is coming from. “Do the vents extend down to a subsurface ocean or are the ejecta simply from warmed ice caused by friction stresses near the surface?” Roth asks. So far we don’t know. And as to the source of the faint emissions detected by Hubble, the long cracks on Europa’s surface known as lineae may well be the answer. That would correspond to the fissures that the Cassini spacecraft has seen near the south pole of Enceladus.

But whatever the thickness of Europa’s ice, flying through a plume rather than drilling would make our task immeasurably easier. We can also take up Freeman Dyson’s suggestion, noted in the comments by Larry Klaes, that space around Europa should be investigated for the possible remains of aquatic life forms that could have been blown out by impact events.

Another reminder of Enceladus is the fact that the intensity of the plumes detected on Europa varies with the moon’s orbital position. The jets are detected only when Europa is at the farthest point in its orbit from Jupiter, while signs of venting disappear when the moon is closer. Are we looking at tidal flexing caused by Jupiter’s gravitational pull? That’s what one would expect with a subsurface ocean placed in this environment. It’s interesting that Europa’s own gravity, twelve times that of Enceladus, would cause any water vapor to fall back to the surface, leaving surface features near the south pole that may be observable by future spacecraft.