Has astrometry finally bagged an exoplanet? A new study from Henri Boffin (European Southern Observatory) and colleagues has found compelling evidence that the nearest pair of brown dwarfs to the Sun — WISE J104915.57-531906, otherwise known as Luhman 16AB — is home to a hitherto undetected companion. It’s interesting news not only for the astrometry angle but because Luhman 16AB is no more than 6.6 light years away, making it the third closest system to the Sun after Alpha Centauri and Barnard’s Star. 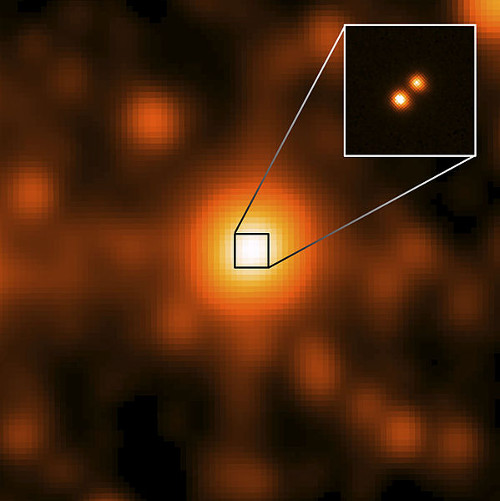 I give prominence to astrometry here because the European Space Agency’s Gaia mission was launched this morning, chartered with creating a three-dimensional map of the Milky Way, but also with finding exoplanets using astrometry as its primary method. While radial velocity measures tiny motion in stars induced by unseen planets, it does so by analysis of the Doppler shift in light from the star. Astrometry actually measures the positions and movement of the stars. It’s all about measuring angles and deriving astrophysical data from the result.

The Hubble Space Telescope used astrometric methods in 2002 to study a planet around Gliese 876 that had already been discovered, but despite many claims, planet discoveries via astrometry have yet to be confirmed. The technique has had a checkered history. William Herschel studied the effects of what he believed to be an unseen companion on the star 70 Ophiuchi in the 18th Century, and numerous claims involving other nearby systems have been made over the years, most recently one involving a Jupiter-class object around the nearby red dwarf VB 10 and a 2010 study of HD 176051. But the changes in stellar position involved are so tiny that we need a new generation of instruments to really put the method to work.

The late, lamented Space Interferometry Mission would have been such an instrument, but of course it never flew. Now we have Gaia to look forward to, and as the mission progresses, we’ll follow its observations with interest. The sunshield has deployed and Gaia is moving toward L2, some 1.5 million kilometres beyond Earth as seen from the Sun. Gaia will measure stars with micro-arcsecond precision. Astrometry is most sensitive to planets with large orbits, which makes it a useful complement to radial velocity methods that are most sensitive to nearer objects.

For our purposes today, though, the Boffin team used the FORS2 instrument on ESO’s Very Large Telescope at Paranal to image Luhman 16AB in the spring and early summer of this year, looking for displacements of the two brown dwarfs in their orbit. Says Yuri Beletsky (Carnegie Institution for Science):

“The two brown dwarfs are separated by about three times the distance between the Earth and the Sun. Binary brown dwarf systems are gravitationally bound and orbit about each other. Because these two dwarfs have so little mass, they take about 20 years to complete one orbit.”

Measuring down to a precision of a few milli-arcseconds, the researchers found small deviations from the expected motion of the two brown dwarfs around each other. The preprint of the upcoming paper in Astronomy & Astrophysics has this to say:

The FORS2 data, once combined with the data of Luhman (2013) and Mamajek (2013), yield a signiﬁcant improvement of the precision of the parallax derived by Luhman (2013). Yet, the FORS2 positions alone indicate that a two-body system is very unlikely whereas an additional companion would explain the observed wobbles. Such a companion must have a mass lower than the brown dwarfs in the system, because i) it would otherwise have been seen in direct imaging or spectroscopy, and ii) a system with two equal mass brown dwarfs would not be detected as there would be no motion of the photocentre.

We can say little about the putative companion, with Boffin’s team noting only that its likely mass is between a few and up to 30 Jupiter masses, but the paper points out that an object of the latter size should be detectable by adaptive optics given the size of the expected separation. As to the brown dwarfs themselves, their masses are predicted to be 0.04-0.05 solar masses for the primary and 0.03-0.05 for the secondary. The system seems to present itself to us nearly edge-on, making for the possibility of a radial velocity follow-up with a robust signal.

Assuming we really do have a planet here, it would be the second closest exoplanet to the Earth (assuming that Alpha Centauri Bb is eventually confirmed). Previous brown dwarf planets have been found by microlensing and direct imaging, with microlensing able to find relatively close planets and direct imaging helpful at planets with large separation from their host star. Luhman 16AB gives us a chance to study a planet at an intermediate distance as we try to learn more about brown dwarfs and the planet formation processes that may be at work around them.