Cometary Clues to the Fomalhaut System?

It was only in October of this year that we discovered that a red dwarf star called LP 876-10 was in fact part of the Fomalhaut system. Now known as Fomalhaut C, the diminutive object is making news of its own with the announcement that, like its much larger and brighter counterpart, Fomalhaut A, it hosts a belt of comets. That two stars in the same system could each have a ring of comets raises interesting issues. Grant Kennedy (University of Cambridge), whose team made the discovery using data from the Herschel Space Observatory, explains:

“It’s very rare to find two comet belts in one system, and with the two stars 2.5 light years apart this is one of the most widely separated star systems we know of. It made us wonder why both Fomalhaut A and C have comet belts, and whether the belts are related in some way.” 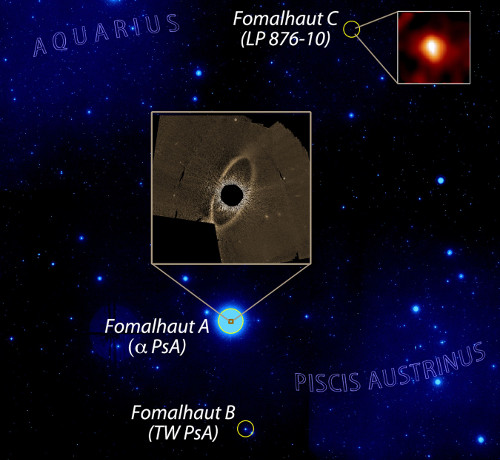 There are those who speculate that the Oort Cloud might extend halfway to Alpha Centauri, perhaps intersecting with a similar cloud around the triple star system there, but the idea that stars 2.5 light years apart could be members of the same system takes a little getting used to. Proxima Centauri, at some 15000 (plus or minus 700 AU) has undergone extensive scrutiny to discover whether it is gravitationally bound to Centauri A and B — Greg Laughlin and Jeremy Wertheimer (UC-Santa Cruz) make a convincing case that it is. 2.5 light years is a much further stretch, but Fomalhaut C has been demonstrated to be gravitationally bound to Fomalhaut A.

And in case you’re wondering, Fomalhaut B (TW PsA), the second member of this trinary system, is fully 0.91 light years from Fomalhaut itself, a K4-class object whose velocity and age are consistent with its being bound to this system. You’ll recall that Fomalhaut A is also where the first planet to be directly imaged at visible wavelengths was found. The image of Fomalhaut b showed it to be orbiting just inside the outermost of the star’s two debris disks, perhaps as much an accumulation of rubble as a fully-formed planet, but one capable of shaping the debris disk itself. The disk emits considerable infrared radiation and has been well studied. 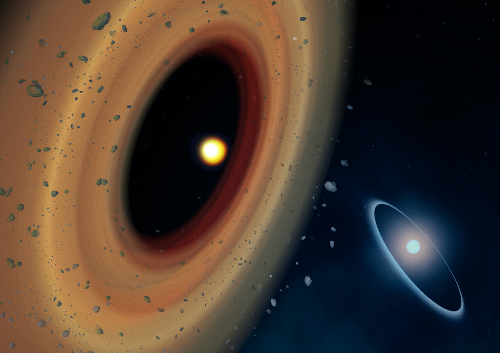 The discovery of a cometary belt around Fomalhaut C may be telling us something about encounters within this system in the past. For both the outermost disk around Fomalhaut A and the planet that orbits it move in elliptical orbits, probably the result of encounters with undetected planets or with one of the other two stars, B and C. Encounters like these can brighten a disk by causing the comets within them to collide more frequently and release more dust and ice. The comet belts around both A and C in the Fomalhaut system are bright enough to suggest such encounters. To follow up on the matter will require further study of Fomalhaut’s C’s orbit.

The paper summarizes the situation:

Whether there is any link between the discs around Fomalhaut and LP 876-10 is unclear. If the stars have always remained well separated, the evolution of the two bright debris discs should be no different to random single stars, and their detection in the Fomalhaut system would be attributed to the relative youth of the system (in particular LP 876-10). Alternatively, the wide separation of the companions may lead to complex dynamics; the bright debris discs and eccentric planet may have a common cause due to a past interaction between Fomalhaut and LP 876-10, which stirred up their debris discs, perhap igniting a collisional cascade in a previously quiescent disc… or provoking an instability in the planetary system… that later stirs the disc. Such scenarios are of course speculation, but motivate detailed descriptions of all system components.”

All of which gets us back to Fomalhaut B, a star that lacks a bright debris disk of the sort found around its two companions. Is the very lack of such a disk pointing to past encounters between A and C, with B unaffected by their interactions? Computer simulations and further observations of the Fomalhaut C belt may provide some answers. The paper adds: “At only a few dozen light years from Earth, this remarkable system provides a unique laboratory in which to observe one outcome of star and planet formation in detail.”