From Brown Dwarfs to NEOWISE

I will admit to an obsession with small, dim stars, one that goes far enough to take in those not-quite stars called brown dwarfs, objects too small to ignite hydrogen fusion. The WISE mission showed us that, at least in our Sun’s neighborhood, brown dwarfs aren’t as common as we once thought, with perhaps one of them for every six main sequence stars. For their part, red dwarfs are the prime currency of the galaxy, accounting for 75 to 80 percent of all stars, so between the two we have a host of venues for planets and, possibly, life. But so much needs to be done before we’ll know if either brown or red dwarfs could really be candidates for astrobiology around them.

These thoughts are triggered by more news from WISE, now in its reactivated incarnation as NEOWISE (Near-Earth Object Wide-field Infrared Survey Explorer). The spacecraft came back to life in September after 31 months of hibernation and is now working to help us identify potentially hazardous near-Earth objects, a reminder that brown dwarfs were only a part of a much larger mission to characterize the infrared sky. But before I leave brown dwarfs today, let me run an image Greg Benford passed along, a Jon Lomberg conception of a brown dwarf. 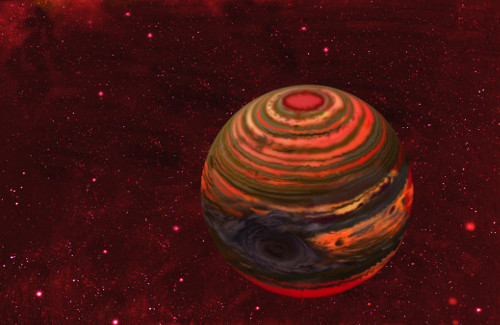 Image: Could a brown dwarf like this form planets that support life? Credit: Jon Lomberg.

If memory serves, I ran this image a long time ago in the course of another brown dwarf discussion, and Greg and I talked about it at the first 100 Year Starship Symposium in Orlando. The Lomberg artwork was on Greg’s mind when he finished his recent story “The Man Who Sold the Stars” (in Starship Century) with a scene set around a dim brown dwarf that was only discovered after a renewed search of old data, including that of the WISE mission. Greg describes a surreal landscape on a planet orbiting the brown dwarf called Redstar:

Stars shone in pale gray here against the inky black. The huge hull of Redstar hung as a burgundy disk cut off by the sea. Here and there across the long panorama of perpetual twilight, slanting rays of a deep Indian red showed floating plants, lapping on the waves in a somber sprawl. Everything glowed with infernal incandescence…. Down from the desolate slope to his left came an echoing cry, long and slow. In the thick air a thing like a huge orange gossamer butterfly fluttered on a thin wind. It swooped across a sky peppered with amber clouds and vanished with deliberate, long flaps of its enormous wings, vanishing behind a low eroded hill.

As we learn more about dim stars and much dimmer brown dwarfs, we have to answer key questions that impinge upon their chances for such life. About red dwarfs, we have to learn whether tidal lock offers stable meteorology anywhere on the surface (various papers have argued that it can), and whether the flare activity particularly in young stars would sterilize the planet or serve as a spur to evolutionary change. About brown dwarfs we have to learn whether these continually cooling objects produce rocky planets in close orbits that could stay warm long enough for life to thrive.

NEOWISE Surveys the Nearby Sky

We won’t have the answers to these questions any time soon. For this morning, then, back to NEOWISE. The image below shows a view from the spacecraft after its recent reactivation. If you’ll study the center of the image, you’ll see the track of an asteroid as captured in a series of exposures. This image shows an area in the constellation Pisces; the asteroid is (872) Holda. A red streak at the top of the image is the track of an Earth-orbiting satellite. 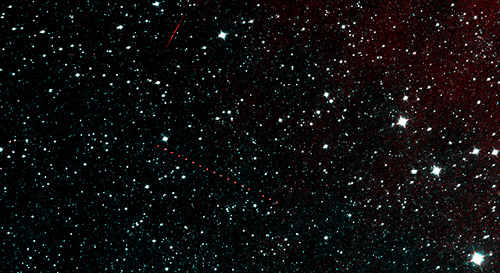 Image: NEOWISE originated as WISE (Wide-field Infrared Survey Explorer), which was put into hibernation in 2011 upon completing its goal of surveying the entire sky in infrared light. WISE cataloged three quarters of a billion objects, including asteroids, stars and galaxies. In August 2013, NASA decided to reinstate the spacecraft on a mission to find and characterize more asteroids. Credit: NASA/JPL.

From 2010 to early 2011, NEOWISE discovered more than 34,000 asteroids and characterized 158,000 throughout the Solar System. Amy Mainzer, principal investigator for NEOWISE at JPL, looks at the future of the mission:

“NEOWISE not only gives us a better understanding of the asteroids and comets we study directly, but it will help us refine our concepts and mission operation plans for future, space-based near-Earth object cataloging missions. The spacecraft is in excellent health, and the new images look just as good as they were before hibernation. Over the next weeks and months we will be gearing up our ground-based data processing and expect to get back into the asteroid hunting business, and acquire our first previously undiscovered space rock, in the next few months.”

NEOWISE uses a 40-centimeter telescope and infrared cameras in going about its work studying asteroid size, albedo, reflectivity and other properties. The original WISE mission captured more than 2.7 million images in various infrared wavelengths and catalogued well over 700 million objects. The primary goal of NEOWISE is to study asteroids and comets that approach within 45 million kilometers. It’s exciting and necessary work, but I do wish we had a second WISE working on brown dwarfs.

Next post: Mass Effect: What Exoplanet Atmospheres Can Tell Us