Mass Effect: What Exoplanet Atmospheres Can Tell Us

Let me offer best wishes for the holidays to all Centauri Dreams readers, with thanks for the numerous comments and suggestions over the course of the past year. The schedule this week is abbreviated but I’ll have a new post up on Friday. I’m about to set out to gather the materials I need for a family dinner tonight, but I have time this morning to talk about interesting new work on figuring out the mass of an exoplanet. As you might guess, this is a key measurement, and a tough one to make. The work out of MIT offers an elegant solution.

I yield to no one in my admiration for the tough-minded Sara Seager (MIT), whose career in astrophysics is so movingly described in Lee Billings Five Billion Years of Solitude: The Search for Life Among the Stars

. A number of readers pointed out Seager’s most recent study, which develops this new technique for our exoplanet toolkit. Julien de Wit, a MIT grad student who is lead author on the paper just published in Science, describes his work with Seager as a way of determining the mass of an exoplanet using nothing more than the signature of its transit.

Now this is interesting stuff because learning something of a planet’s mass can help us make the call on whether it is a rocky world capable of supporting life. Radial velocity methods work well when larger planets are at play, or smaller worlds that orbit extremely close to their parent star. But radial velocity is trickier when we’re dealing with small planets orbiting further out. A planet like the Earth, for example, would be hard to analyze using radial velocity alone. We do, however, have the ability to study planetary atmospheres as planets transit their stars, and ingenious analysis may make it possible to extract from this a reading of a planet’s mass.

Thus de Wit’s description of what the duo have been up to:

“With this method, we realized the planetary mass — a key parameter that, if missing, could have prevented us from assessing the habitability of the first potentially habitable Earth-sized planet in the next decade — will actually be accessible, together with its atmospheric properties.” 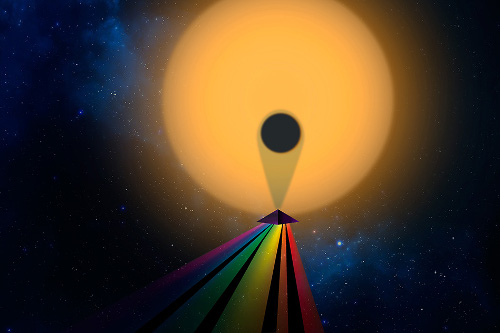 How? Our old friend HD 189733b comes into play, a transiting ‘hot Jupiter’ some 63 light years away that has been a testbed for the technique called transmission spectroscopy, where scientists analyze the light that passes through the atmosphere to determine properties like temperature and the density of atmospheric molecules. Because we can study an atmosphere, we can study the effect of mass on that atmosphere. The method described in the de Wit/Seager paper works with a standard equation that describes the effect of three factors — temperature, gravitational force and atmospheric density — on the planet’s atmospheric pressure profile, which is a measure of how pressure changes throughout the atmosphere.

Believing that each of these factors could be derived independently from a transmission spectrum, de Wit studied the effects of each using the 18th Century mathematical constant called the Euler-Mascheroni constant. This MIT news release describes the constant as an ‘encryption key’ that helped decode the ways the properties of a planet’s atmosphere are embedded in its transmission spectrum. Turned on HD 189733b, the analysis yielded the same mass measurement that other scientists had obtained by radial velocity methods. Future space-based platforms should be able to turn these methods to much smaller worlds.

My particular interest in red dwarfs is piqued by this study, because radial velocity methods are not well suited for small planets orbiting faint stars. Extending the range of mass measurement through this new transit technique would make the mass of planets transiting red dwarfs that much more discoverable, offering another way of characterizing possibly habitable worlds. The technique is not, of course, limited to red dwarfs, and we can assume that Earth-sized planets orbiting stars not so different from the Sun will be studied using the same methods, once we have space-based instruments like the James Webb Space Telescope operational.