‘Exomoons’ — moons around planets around other stars — are another of those new frontiers of modern astronomy. It’s astonishing to reflect that 51 Pegasi b, the first exoplanet orbiting a main-sequence star, was discovered as recently as 1995, a time when we could only suspect that planets might be common and were only then working out the best ways to find them. Now we have thousands of planet candidates, the search is on for true Earth analogues, and the idea that we might make as fine-grained a discovery as an exomoon is an exhilarating prospect.

So is the recent paper from David Bennett (University of Notre Dame) and colleagues the breakthrough we’ve been waiting for? The answer is no because we have no way of knowing whether this suggestive find is a true moon around a planet or perhaps two larger objects in gravitational synch at a much further distance. But either case is intriguing. Here are the possibilities for the 2011 event called MOA-2011-BLG-262, detected by gravitational microlensing:

Now brown dwarfs with planets are interesting enough, so I would find either of these scenarios fascinating. But what makes the exomoon picture still more riveting is that these objects are evidently out there on their own, with no associated star. If we really are looking at an exomoon and a planet, then the question of how they came to be where they are emerges. New Scientist quotes exomoon hunter David Kipping (Harvard University) as saying “It almost begs the question as to whether we can really call these objects ‘moons’ or whether some other name is more apt.” What that other name might be is left to the imagination of the reader.

So unusual would a free-floating planet with a moon of its own be that the paper on this work leans preferentially to the brown dwarf solution. From the preprint:

…an apparently free-floating planet with a half Earth-mass moon would be a new class of system that was not previously known to exist. Such a new discovery would require strong evidence, so our favored model for this event is that it is a low-mass star or brown dwarf orbited by a planet of about Neptune’s mass.

Or as the abstract puts it: “The data are well fit by this exomoon model, but an alternate star+planet model fits the data almost as well.”

If that seems to take the sizzle out of this story, please reconsider. This interesting duo was identified by gravitational microlensing, in which the passage of an object in front of a more distant star bends the light from that star in ways that can be quantified. In the case of MOA-2011-BLG-262, the light of the distant star was magnified about seventy times beyond the norm. About an hour later the second, smaller increase in brightness occurred, suggesting the passage of two objects in front of the star. Because microlensing events don’t repeat, we may never be able to untangle the true story of MOA-2011-BLG-262. But the work of Bennett and colleagues points to future microlensing breakthroughs:

…it should be possible to definitely distinguish similar models for future events if they are observed with high cadence from multiple sites. Very high cadence observations on 1-2m class telescopes are able to measure the light curves precisely enough to distinguish similar models (Gould et al. 2006), such as the fast and slow models for MOA-2011-BLG-262. If these high cadence observations are taken from observatories separated by thousands of kilometers, then the terrestrial parallax effect can be used to measure the lens masses (Gould & Yee 2013). 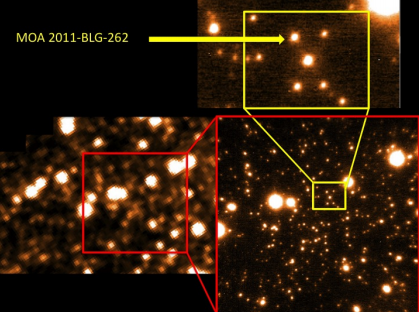 Image: The left panel shows a K-band (infrared) image from the VISTA 4m telescope from the VVV (Vista Variables in the Via Lactea) survey. The field observed by the Keck-2 telescope in K and a zoom of this field are shown to the right. The arrow indicates the microlensing source star, separated by 0.51 arcsec from its nearest neighbor. Credit: David Bennett.

‘Cadence’ as used in the passage above refers to how long it takes to re-observe the same target. High cadence can be combined with other techniques, and the paper notes that observatories separated by thousands of kilometers can take advantage of terrestrial parallax to increase and refine the microlensing detection rate. Ultimately, we’ll need new instruments:

…the development of large robotic networks of 1m class telescopes, such as the Las Cumbres Robotic Telescope Network (Brown et al. 2013), will substantially improve the rate of terrestrial microlensing parallax mass measurements. Thus, if systems resembling the planetary-mass host models for MOA-2011-BLG-262 are common, the combination of high cadence microlensing surveys, rapid realtime event detection by these surveys, and high cadence follow-up observations should enable the definitive discovery of rogue exoplanets with moons of nearly an Earth mass within a few years.

Recall the ground-breaking work of David Kipping and colleagues on using transit timing (TTV) and transit duration variations (TDV) to spot an exomoon signal in transit data, and the ongoing Hunt for Exomoons with Kepler project that Kipping runs. Add in this recent microlensing story and the possibility of future microlensing discoveries of the kind described above. It’s clear that we have exmoon detections in our future, and who knows what we may learn about the characteristics of rogue objects that, if MOA-2011-BLG-262 is a true indication, may not be traveling alone.

The paper is Bennett et al., “A Sub-Earth-Mass Moon Orbiting a Gas Giant Primary or a High Velocity Planetary System in the Galactic Bulge” (preprint).

Previous post: Mass Effect: What Exoplanet Atmospheres Can Tell Us