Will We Find Habitable ‘Super-Earths?’

As the 223rd meeting of the American Astronomical Society continues in Washington, we’re continuing to see activity on the subject of mini-Neptunes and ‘super-Earths,’ the latter often thought to be waterworlds. Given how fast our picture of planets in this domain is changing, I was intrigued to see that Nicolas Cowan (Northwestern University) and Dorian Abbot (University of Chicago) have come up with a model that allows a super-Earth with active plate tectonics to have abundant water in its mantle and oceans as well as exposed continents.

If Cowan and Abbot are right, such worlds could feature a relatively stable climate even if the amount of water there is far higher than Earth. Focusing on the planetary mantle, the authors point to a deep water cycle that moves water between oceans and mantle, a movement made possible by plate tectonics. The Earth itself has a good deal of water in its mantle. The paper argues that the division of water between ocean and mantle is controlled by seafloor pressure, which is proportional to gravity.

As planetary size increases, in other words, a super-Earth’s gravity and seafloor pressure go up as well. Rather than a waterworld with surface completely covered by water, the planet could have many characteristics of a terrestrial-class world, leading Cowan to say: “We can put 80 times more water on a super-Earth and still have its surface look like Earth. These massive planets have enormous sea floor pressure, and this force pushes water into the mantle.” 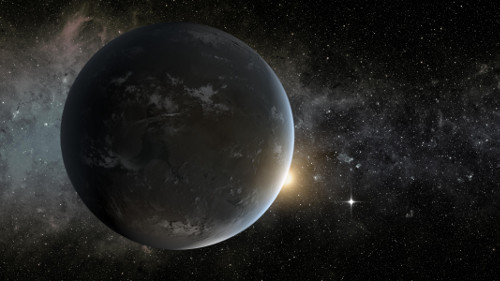 Image: Artist’s impression of Kepler-62f, a potential super-Earth in its star’s habitable zone. Could a super-Earth like this maintain oceans and exposed continents, or would it most likely be a water world? Credit: NASA/Ames/JPL-Caltech.

The implications for habitability emerge when we regard super-Earth oceans as relatively shallow. Exposed continents allow a planet to undergo the deep carbon cycle, producing the kind of stabilizing feedback that cannot exist on a waterworld. A super-Earth with exposed continents is much more likely to have an Earth-like climate, with all of this being dependent on whether or not the super-Earth has plate tectonics, and on the amount of water it stores in its mantle. Cowan calls the argument ‘a shot from the hip,’ but it’s an interesting addition to our thinking about this category of planet as we probe our ever growing database of new worlds.

On the matter of the amount of water, not all super-Earths would fit the bill, and it shouldn’t be difficult to turn a planet into a waterworld — Cowan argues that if the Earth were 1 percent water by mass, not even the deep water cycle could save the day. Instead, the researchers are considering planets that are one one-thousandth or one ten-thousandth water. From the paper:

Exoplanets with sufficiently high water content will be water-covered regardless of the mechanism discussed here, but such ‘ocean planets’ may betray themselves by their lower density: a planet with 10% water mass fraction will exhibit a transit depth 10% greater than an equally-massive planet with Earth-like composition… Planets with 1% water mass fraction, however, are almost certainly waterworlds, but may have a bulk density indistinguishable from truly Earth-like planets. Given that simulations of water delivery to habitable zone terrestrial planets predict water mass fractions of 10-5 – 10-2… we conclude that most tectonically active planets — regardless of mass — will have both oceans and exposed continents, enabling a silicate weathering thermostat.

The paper is Cowan and Abbot, “Water Cycling Between Ocean and Mantle: Super-Earths Need Not be Waterworlds,” The Astrophysical Journal Vol. 781, No. 1 (2014). Abstract and preprint available.