‘Cluster Planets’: What They Tell Us

2500 light years from Earth in the constellation of Cancer lies Messier 67, an open star cluster that is now known to be home to at least three planets. The new worlds, found using the HARPS spectrograph on the European Southern Observatory’s 3.6-meter instrument at La Silla, come as the result of an observation program covering 88 selected stars in the cluster over a period of six years. The finding is noteworthy because we have so few known planets in star clusters of any kind. Moreover, one of these planets orbits a truly Sun-like star. 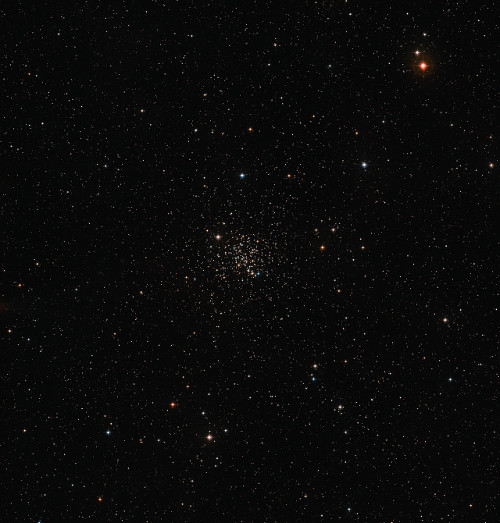 Image: This wide-field image of the sky around the old open star cluster Messier 67 was created from images forming part of the Digitized Sky Survey 2. The cluster appears as a rich grouping of stars at the centre of the picture. Credit: ESO/Digitized Sky Survey 2 / Acknowledgement: Davide De Martin.

I’m cautious about calling anything ‘Sun-like’ given how loosely that term has been used over the years, but ESO astronomers say the cluster star YBP1194 fits the bill: It has a similar mass, and shows both chemical abundances and temperatures very close to Sol’s. Of the three discovered worlds, two orbit G-class stars similar to the Sun (the other is YBP1514), while the third orbits the red giant S364. The first two have roughly one-third the mass of Jupiter, orbiting their host stars in seven and five days respectively, while the third, more massive than Jupiter, orbits the red giant in 122 days.

Because most stars are thought to emerge from clusters, the small number of planets found in them has been a puzzle, spurring the recent work, which was led by Anna Brucalassi (Max Planck Institute for Extraterrestrial Physics). Says Brucalassi:

“In the Messier 67 star cluster the stars are all about the same age and composition as the Sun. This makes it a perfect laboratory to study how many planets form in such a crowded environment, and whether they form mostly around more massive or less massive stars.”

Messier 67 contains about 500 stars and is an open cluster, a stellar grouping that has emerged from a single gas and dust cloud in the relatively recent past. Such clusters are normally found in the spiral arms of galaxies like ours. Globular clusters, on the other hand, are the much larger, spherical collections of stars that orbit around the center of the galaxy. Although a handful of planets have been found in open clusters (Messier 44 and NGC 6811 are other examples), no planets have yet turned up in the far more ancient globular clusters.

The lack of detected planets in open and globular clusters has been under discussion for some time now. From the paper:

To explain the dichotomy between field and cluster stars, it has been suggested that the cluster environment might have a significant impact on the disk-mass distribution. Eisner et al. (2008), studying disks around stars in the Orion Nebula Cluster (ONC), proposed that most of these stars do not possess sufficient mass in the disk to form Jupiter-mass planets or to support an eventual inward migration.

Brucalassi’s work, however, leads in a different direction. The paper continues:

van Saders & Gaudi (2011), in contrast, found no evidence in support of a fundamental difference in the short-period planet population between clusters and field stars, and attributed the non-detection of planets in transit surveys to the inadequate number of stars surveyed. This seems to be confirmed by the recent results.

Planets in open star clusters, in other words, are likely to be as common as those around isolated stars, a finding that draws not just from Brucalassi and team’s work but also from a number of recent observations discussed in the paper. The researchers continue to study M67 to examine the mass and chemical makeup of stars with and without planets.

The paper is Brucalassi et al., “Three planetary companions around M67 stars,” accepted for publication in Astronomy & Astrophysics. See also Pasquini et al., “Search for giant planets in M67 I. Overview” (preprint). And take note of Henry Cordova’s “The SETI Potential of Open Star Clusters,” which ran all the way back in 1995 in Vol. 1, No. 4 of SETIQuest, an early and prescient contribution.