In the first post of 2014, I wrote about what the following year — 2015 — would bring, the New Horizons flyby of Pluto/Charon as well as the arrival of the Dawn spacecraft at Ceres, a fascinating object with a possible internal ocean. But let’s not forget about the European Space Agency’s Rosetta spacecraft, which is now nearing the end of a decade-long journey to comet 67P/Churyumov–Gerasimenko. The spacecraft is scheduled to awake from a two-year stretch in sleep mode today, with arrival at the comet’s core in November. The orbiter will operate there until the end of 2015.

We’ve had missions to comets before, many of them discussed in these pages, but none as ambitious as this one. Rosetta’s Philae lander will attempt a landing on the comet in November while the orbiter will continue tracking it as the comet is transformed by its approach to the Sun into an erupting, churning mass of ice and dust. With gravity about a thousand times less than that of Earth, this is a tricky object to land on, but the visual rewards should be great, according to Michael Combi (University of Michigan), a co-investigator on several instruments aboard the craft: 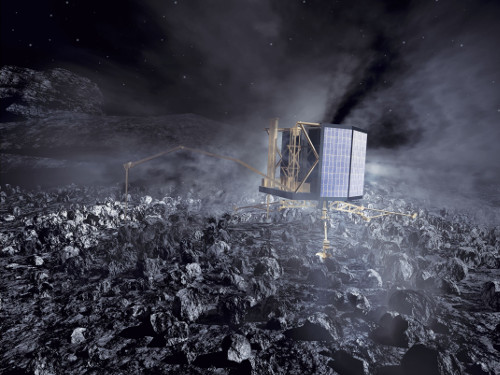 Rosetta’s investigations will be numerous, and many bear directly on issues we routinely discuss here. We’ve been looking, for example, at Pekka Janhunen’s concept of an electric sail that would ride the solar wind — a stream of charged particles flowing outward from the Sun — to distant destinations in the Solar System, reaching perhaps 100 kilometers per second. Rosetta will be studying the interactions of the solar wind with cometary gases to learn more about the composition of the charged particles and help us better understand solar storms.

That’s the kind of space ‘weather’ an electric sail would confront as it makes its long journey to system’s edge. This University of Michigan news release notes that the solar wind travels more slowly from the area of the Sun’s equator, but moves much faster at higher latitudes. Comets pass through a wide range of solar wind conditions and thus offer an ideal way to study the phenomenon. Accurate control and navigation of future craft riding the solar wind will depend upon our understanding of its turbulent interactions.

Comets are also useful in teaching us about the origin and evolution of the Solar System, as they were present in the nebula from which the system grew and have been orbiting far from the Sun ever since. We still have much to learn about their role in delivering water to Earth’s oceans and possibly organic materials. Combi adds: “People use the analogy that it’s been in the freezer for the past 4.5 million years and brought in for convenient study. So we’re looking as much as we can at the way the way the solar system was 4.5 billion years ago.”

This recent NASA news release offers information about the three instruments the agency has contributed to the ESA mission: 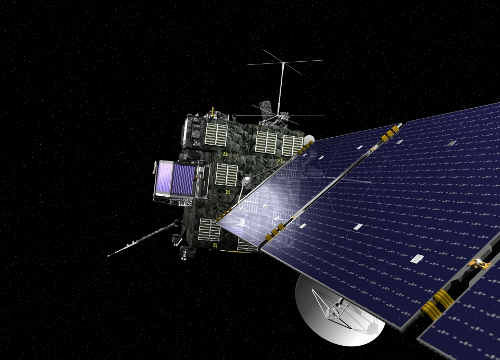 Image: An artist’s view of Rosetta, the European Space Agency’s cometary probe. The spacecraft is covered with dark thermal insulation in order to retain its warmth while venturing into the coldness of the outer solar system, beyond Mars orbit. Credit: ESA.

The European Space Agency’s Rosetta page is here, a place you’ll want to bookmark as the year progresses and Rosetta moves ever closer to its encounter with 67P/Churyumov–Gerasimenko. Thus far the spacecraft has made three Earth flybys and one flyby of Mars as it established its trajectory to the comet, with encounters with asteroids Steins and Lutetia along the way. Assuming all is going well, the spacecraft’s star trackers are now warming up, a six hour process, and adjustments will soon be made to its orientation to keep Rosetta’s solar arrays facing directly toward the Sun. Follow @ESA_Rosetta for confirmation that the wake-up procedure is complete, probably between 1730 and 1830 UTC. Keep an eye on this page for live video updates.