Conventional models of planet formation involve core accretion, where dust grains accumulate into protoplanets whose subsequent collisions and interactions produce planets, or gravitational instability, involving a rapid collapse from dense disk debris into a planetary core. But how far from the parent star does planet formation occur? The more we learn about protoplanetary disks, the more questions individual systems pose, as illustrated by the discovery highlighted today.

I’m looking at the image of a young star called HD 142527 in the constellation Lupus, some 450 light years from Earth. The T Tauri star, some five million years old, is thought to be of about two solar masses. A team of Japanese astronomers using observations from the Atacama Large Millimeter/submillimeter Array (ALMA) has found an asymmetric ring of dust that appears, based on the density of dust in the densest part of the ring, to be producing planets. A previously discovered inner disk is confirmed by this work, but the kicker is that there appears to be a possible planet formation region about 160 AU out, five times the distance between Neptune and the Sun.

The paper on this finding notes that “…the pile-up of disk material beyond 100 AU is quite surprising in the classical scenario of planet formation.” Munetake Momose, a team member and a professor at Ibaraki University, adds this:

“Seeing the site of planet formation directly is one of the most important goals for ALMA. Our observations successfully located a unique candidate in an unexpectedly distant place from the central star. I believe that ALMA will bring us more surprising results.” 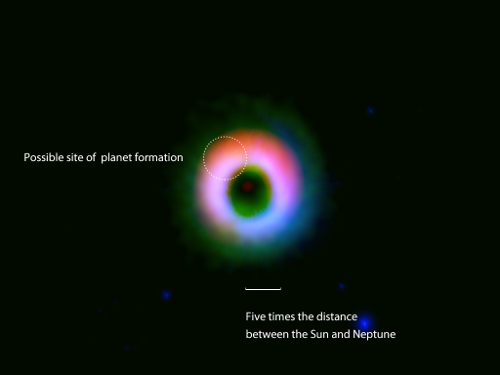 Image: Dust and gas disk around HD 142527. The dust and gas distributions observed by ALMA are shown in red and green, respectively. A near-infrared image taken by the NAOJ Subaru telescope is shown in blue. The image clearly shows that the dust is concentrated in the northern (upper) part of the disk. The circle in the image shows the position of the dust concentration, in which planets are thought to be formed. Credit: ALMA (ESO/NAOJ/NRAO), NAOJ, Fukagawa et al.

This news release from the National Astronomical Observatory of Japan points out that near-infrared observations cannot penetrate the innermost part of the dense region of a protoplanetary disk — near-infrared light is easily absorbed by large amounts of dust. ALMA’s millimeter and submillimeter wavelength observations — these wavelengths are poorly absorbed by dust — allow better resolution of the inner part of the disk. The ring around HD 142527 shows one side that is thirty times brighter than the other. Misato Fukagawa leads the team:

“The brightest part in submillimeter wave is located far from the central star, and the distance is comparable to five times the distance between the Sun and the Neptune. I have never seen such a bright knot in such a distant position. This strong submillimeter emission can be interpreted as an indication that large amount of material is accumulated in this position. When a sufficient amount of material is accumulated, planets or comets can be formed here. To investigate this possibility, we measured the amount of material.”

The researchers, from Osaka University and Ibaraki University, estimate based on the submillimeter emission strength that the dense region under investigation is massive enough to produce giant planets more massive than Jupiter through gravitational instability. But a high enough density of dust in the same region could readily produce smaller rocky planets or the cores of gas giants through core accretion processes. It’s worth noting that a 2013 paper has examined planet formation close to this star; the new work extends to the outer disk.

So HD 142527 seems a promising place for follow-up work, an opportunity to observe critical aspects of the planet formation scenario at considerable distances from the host star. Most ring-like disks under observation have proven to be smaller in mass, lacking the intensity of the brightness fluctuations found around this star, not to mention the disk’s striking asymmetry. New measurements of the gas in this disk using ALMA are being undertaken as the team tries to resolve which of the planet formation processes is taking place around the star.

The paper is Fukugawa et al., “Local Enhancement of Surface Density in the Protoplanetary Ring Surrounding HD 142527,” published in Publications of the Astronomical Society of Japan, on December 25th, 2013 (preprint). The 2013 paper on this system is Casassus et al., “Flows of gas through a protoplanetary gap,” Nature 493 (2 January 2013), pp. 191-194 (abstract).