The Plumes of Ceres

The MACH-11 program (Measurements of 11 Asteroids and Comets Using Herschel) uses data from the European Space Agency’s space-based Herschel observatory to look at small bodies that are targeted by our spacecraft. With the Dawn mission on its way to Ceres, the Herschel data have now revealed the existence of water vapor on the dwarf planet. To my knowledge, this is the first time water vapor has been detected in an asteroid, or I should say, an object that used to be considered an asteroid before the International Astronomical Union decided to re-classify it because of its large size.

Herschel ran out of coolant in the spring of 2013, but not before making a series of observations of Ceres in the two previous years that show a thin water vapor atmosphere. As with so many of our missions (Kepler comes immediately to mind), we still have plentiful data to look through. In this case, we’ll be examining the increasingly fuzzy distinction between asteroids and comets as we try to figure out precisely what is happening on Ceres. Dawn’s investigations, with arrival in March of 2015 and studies continuing all that year, will obviously provide a much closer look.

Carol Raymond is deputy principal investigator for Dawn at the Jet Propulsion Laboratory:

“We’ve got a spacecraft on the way to Ceres, so we don’t have to wait long before getting more context on this intriguing result, right from the source itself. Dawn will map the geology and chemistry of the surface in high resolution, revealing the processes that drive the outgassing activity.” 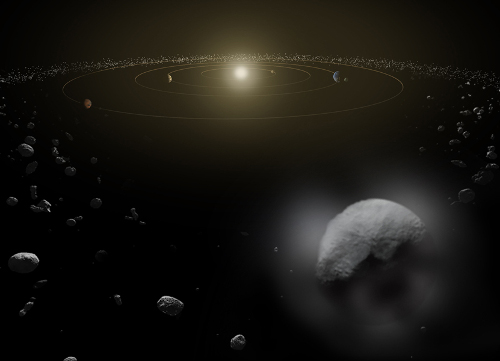 Image: Dwarf planet Ceres is located in the main asteroid belt, between the orbits of Mars and Jupiter, as illustrated in this artist’s conception. Observations by the Herschel space observatory between 2011 and 2013 have revealed the first unambiguous detection of water vapor around an object in the asteroid belt. Credit: JPL/Caltech.

Finding water vapor is not totally unexpected, given the long-standing assumption that Ceres contains a mantle of ice in its interior, one that may include as much as 200 million cubic kilometers of water, more than the amount of fresh water on Earth. Herschel’s work in the far infrared is what it took to make the call, complicated by the fact that the signature proved to be elusive. This JPL news release notes the emerging view that Ceres releases water vapor in plumes at about 6 kilograms per second when orbiting closer to the Sun, while remaining frozen tight when further out.

“The intensity of the water line is linked to certain dark regions on the surface; these are either warmer areas or craters where an impact has exposed some layers of ice deeper down. Moreover, we were able to track how the amount of water changes along the asteroid’s way around the sun: if it passes nearer to the sun the water signature increases and then decreases again in the more remote sections of its orbit.”

Dawn will have specific targets to examine when it arrives thanks to the Herschel work, because the space observatory was able to see how the strength of the water vapor signature varied over time as Ceres spun on its axis. Those dark areas that Müller talks about had also been identified by earlier Hubble observations, and those of ground-based telescopes as well. Clearly, we’ll count on Dawn to teach us a lot more about them and how they operate, just as we used Cassini to investigate the geyser activity on Enceladus. The plumes of Ceres are going to get plenty of attention in the year ahead.