I’m a great believer in what I might call the ‘conventional’ habitable zone; i.e., a habitable zone defined by the possibility of liquid water on the surface. The definition is offered not to exclude exotic possibilities like micro-organisms floating in the clouds of Venus or aquatic life deep inside an ice-covered moon like Europa. Rather, it acknowledges that finding life is hard enough without losing our focus. In terms of exoplanets and feasible near-term study, a warm planet with liquid water — the kind we live on — would command our immediate attention.

But as we look at much broader issues of how life forms, we may indeed learn that our kind of life is but one component of a vast continuum, as recent work out of the University of Aberdeen reminds us. In a new paper published in Planetary and Space Science, researchers tackle the question of life living deep underground. Now the habitable zone starts to broaden, because things get warmer as we go deep.

We know of life here on Earth that exists more than five kilometers below the surface, and given the difficulty of probing these regions, we probably have fragmentary knowledge at best of what’s down there at deeper levels. So if we’re talking underground microorganisms, maybe a place like Gliese 581 d, evidently just past the outer edge of its star’s habitable zone in terms of liquid water, would still qualify. The Aberdeen team thinks conditions less than two kilometers below the surface there could be clement. 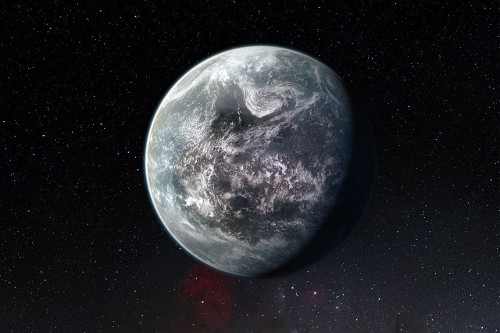 Image: New studies are examining habitable conditions below planetary surfaces, where liquid water might exist. Internal heat might keep even a ‘rogue’ planet moving without a parent star capable of hosting some kind of life underground. This image is an artist’s impression of the rocky super-Earth HD 85512 b. Credit: European Southern Observatory.

The Aberdeen work revolves around a computer model that estimates the temperature below the surface of planets of varying sizes at varying distances from their star. Doctoral student Sean McMahon comments on the implications in this Aberdeen news release:

“Using our computer model we discovered that the habitable zone for an Earth-like planet orbiting a sun-like star is about three times bigger if we include the top five kilometres below the planet surface. The model shows that liquid water, and as such life, could survive 5km below the Earth’s surface even if the Earth was three times further away from the sun than it is just now. The results suggest life may occur much more commonly deep within planets and moons than on their surfaces. If we go deeper, and consider the top 10 km below the Earth’s surface, then the habitable zone for an Earth-like planet is 14 times wider.”

An extension of the habitable zone indeed, taking us well past the orbit of Saturn in our own Solar System. And ponder the case of a rogue ‘super-Earth,’ a planet four or five times more massive than the Earth that has for whatever reason been ejected into the interstellar deep. We’ve talked about such places before and their prospects for generating enough internal heat to make some kind of life possible even in the absence of a parent star. And when you start extending habitable zones this far, a cosmos teeming with at least primitive life seems possible.

Since we’re pushing habitable zones in new directions, let me also mention Craig Stark (University of St. Andrews), whose work has focused on alien atmospheres extending from exoplanets to brown dwarfs. Stark argues that prebiotic molecules can form in these environments, saying “The atmospheres around exoplanets and brown dwarfs form exotic clouds that, instead of being composed of water droplets, are made of dust particles made of minerals.” Add a dose of lightning and you have charged particles and interesting possibilities:

“These charged gases are called plasmas – like those found in fluorescent lights and plasma televisions. The dust can find itself immersed in the charged gases and the charged particles stick to the dust making the dust charged. The charged dust attracts onto its surface other charges from the surrounding plasma helping grow molecules on the dust surface.”

The precursors to life in the atmosphere of a brown dwarf? Now we’re really pushing the definition of ‘habitable zone.’ The Stark paper is “Electrostatic activation of prebiotic chemistry in substellar atmospheres,” accepted at The International Journal of Astrobiology (preprint). The McMahon paper is “Circumstellar habitable zones for deep terrestrial biospheres,” Planetary and Space Science Vol. 85 (September, 2013), pp. 312-318 (abstract).