Focus on the Nearest Brown Dwarfs

Luhman 16AB (otherwise known as WISE J104915.57-531906) holds out quite an allure for those of us hoping to see future exploratory missions to nearby interstellar space. As recounted here in December (see Possible Planet in Nearby Brown Dwarf System), the European Southern Observatory’s Henri Boffin has found that this brown dwarf pair is likely home to a previously undetected companion. Bear in mind that we know of no closer brown dwarf; indeed, Luhman 16AB is no more than 6.6 light years out, making it the third closest system to our Sun after Barnard’s Star and, of course, Alpha Centauri.

We know very little about this putative companion other than Boffin’s estimate that its likely mass is between a few Jupiter masses and perhaps as many as 30, but the good news is that the high end of this mass range should offer us an object that can be detected by adaptive optics, given the size of the apparent separation. In any case, radial velocity methods should work nicely here as well, given that as seen from Earth, the brown dwarf pairing appears nearly edge-on.

Now comes further news from the European Southern Observatory, with the announcement that one of the two brown dwarfs, Luhman 16B (WISE J104915.57-531906.1B) shows variations in brightness as it rotates, giving us strong hints of detectable features in its atmosphere. Using ESO’s Very Large Telescope, a team of researchers has mapped out the light and dark areas on Luhman 16B, observing the brown dwarf pair with the CRIRES instrument on the VLT (CRIRES is a high-resolution infrared spectrograph). The resulting ‘map’ appears below. 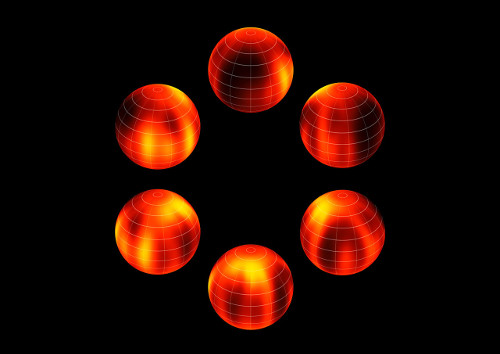 Image: ESO’s Very Large Telescope has been used to create the first ever map of the weather on the surface of the nearest brown dwarf to Earth. An international team has made a chart of the dark and light features on WISE J104915.57-531906.1B, which is informally known as Luhman 16B and is one of two recently discovered brown dwarfs forming a pair only six light-years from the Sun. The figure shows the object at six equally spaced times as it rotates once on its axis. Credit: ESO/I. Crossfield.

Ian Crossfield (Max Planck Institute for Astronomy) is lead author of the paper on this work, which will appear in Nature:

“Previous observations suggested that brown dwarfs might have mottled surfaces, but now we can actually map them. Soon, we will be able to watch cloud patterns form, evolve, and dissipate on this brown dwarf — eventually, exometeorologists may be able to predict whether a visitor to Luhman 16B could expect clear or cloudy skies.”

‘Exometeorologist’ — yet another new job description spawned by this golden age of exoplanetary exploration!

You can see where this is heading. As we learn more about the weather patterns on brown dwarfs, we are moving toward theoretical models which can be tested against future observations. When next-generation telescopes like the European Extremely Large Telescope come online, we can anticipate eventually creating similar maps for young gas giants. In none of these worlds should we expect clement weather: The clouds Crossfield’s team detected show temperatures in the range of 1100 degrees Celsius and are likely carrying droplets of molten iron and various minerals adrift in an atmosphere made up largely of hydrogen.

Crossfield’s map is complemented by a second study led by Beth Biller (University of Edinburgh), which observed brightness variations at different wavelengths in an attempt to understand what happens in various layers of the atmosphere on both Luhman 16A and 16B. This team drew its data from the 2.2 meter telescope at ESO’s La Silla observatory in Chile. Measurements were made in seven different filter bands, where emissions are correlated with the temperature of the emitting gas. Thus the different wavelengths probably represent layers at different depths within the brown dwarf’s atmosphere, constituting a kind of atmosphere probe.

The resulting paper appears in Astrophysical Journal Letters. According to this MPIA news release, this investigation marks the first simultaneous monitoring of a brown dwarf’s brightness variability in more than two wavelength ranges. Says Biller:

“We’ve learned that the weather patterns on these brown dwarfs are quite complex. The cloud structure of the brown dwarf varies quite strongly as a function of atmospheric depth and cannot be explained with a single layer of clouds.”

So we wind up with brown dwarfs with multiple cloud layers and/or temperature variations as we push ahead with the effort to understand weather patterns in distant solar systems. Keep in mind we are dealing with a place that is only slightly farther from the Earth than Barnard’s Star. If the companion object is eventually confirmed as a planet, Luhman 16AB will have the second closest exoplanet to Earth yet detected (assuming Centauri Bb is also confirmed). It will be an exciting period ahead as we try to learn what other objects may circle the nearest stars.

The mapping of Luhman 16B is described in Crossfield et al., “A Global Cloud Map of the Nearest Known Brown Dwarf,” about to appear in Nature (30 January 2014). See this ESO news release for more on that finding. Beth Biller and team’s work is found in Biller et al., “Weather on the Nearest Brown Dwarfs: Resolved Simultaneous Multi-Wavelength Variability Monitoring of WISE J104915.57-531906.1AB” in Astrophysical Journal Letters, Volume 778, Issue 1, L10.

Next post: Shaking Up a ‘Snow Globe’ Solar System