Alpha Centauri: Dust and Its Significance

When I was growing up, Alpha Centauri was utterly dismissed as a possible location for planets. A binary system couldn’t possibly produce them, I read, and it was assumed that planets could only be found around single stars like our own Sun. How times have changed. Now we know of plenty of multiple star systems with planets — the number is over ten percent of all known exoplanets — and while many of these are widely spaced, we’ve nonetheless found a few in tight circumstances indeed. HD196885 (Gamma Cephei) is an example, where the separation between the two stars is on the order of 20 AU, much like Centauri A and B.

How planets form around such stars is an interesting issue because, as a new paper considering dust in the Alpha Centauri system explains, the standard core-accretion model runs into problems with environments as perturbed as these. We can see the results in existing observations: Radial velocity methods detect no planets more massive than 2.5 Jupiter masses inside 4 AU of Centauri A or B, and large regions seem, from theoretical models, to be a real challenge to planet formation, with an outer limit for the process perhaps in the 2 AU region. 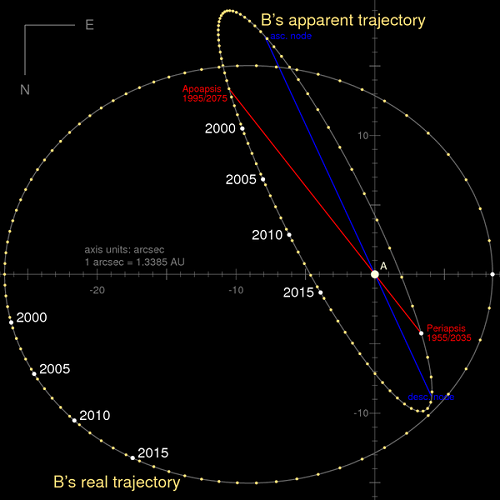 Image: Trajectory of Alpha Centauri B relative to A (fixed to the coordinate origin) as seen from the Earth (inclined ellipse) and face-on (horizontal ellipse). The orbit parameters are taken from Pourbaix et al. (2002). Credit: SiriusB/Wikimedia Commons.

What’s interesting about a new paper called “How dusty is α Centauri?” is that it gets into issues raised by the large number of planet-bearing stars known to show far-infrared emission from cool circumstellar dust. The authors, led by Joachim Wiegert (Onsala Space Observatory, Sweden), observed the Centauri stars to look for dust emissions there, presumably the results of collisions between objects up to planetesimal size. The team sought to understand the properties of the dust and to gauge the minimum temperature (Tmin) of the stellar chromospheres, a layer in the stars’ atmospheres that plays a role in how we determine the emission from cool dust in such systems.

The close-in Centauri stars, then, are templates that may help us find undetected dust disks around other stars. The team notes that it is::

…primarily concerned with the possible effects Tmin might have on the estimation of very low emission levels from exo-Edgeworth-Kuiper belt dust. The intensity of the stellar model photosphere beyond 20 to 40 µm is commonly estimated from the extrapolation of the spectral energy distribution (SED) into the Rayleigh-Jeans (RJ) regime at the effective temperature Teff. There is a potential risk that this procedure will overestimate actual local stellar emissions, which may be suppressed at the lower radiation temperatures. In those cases, where the SEDs are seemingly well fit by the RJ-extrapolations, the differences may in fact be due to emission from cold circumstellar dust (exo-Edgeworth-Kuiper belts) and, here, we wish to quantify the magnitude of such an effect.

As to Alpha Centauri itself, a slight infrared excess could be interpreted as dust emissions around both Centauri A and B. Disk modeling then produces the possibility of two circumstellar disks, the one around Centauri A being no larger than 2.78 ± 1.48 AU, while around Centauri B the limits are 2.52 ± 1.60 AU (the planet tentatively identified as Centauri Bb in 2012 is small enough and close enough to the star that it is inside the range of the authors’ disk models, and is thus ignored in their modelling). And while a circumbinary dust disk is possible at distances greater than 75 or so AU from the barycenter of the stars, no such disk was detected by these observations, and the authors note that other studies have made this scenario unlikely.

And this is interesting: “These size limits are reminiscent of the inner solar system, i.e., this opens the possibility for an asteroid belt-analogue for each star which forms dust discs through the grinding of asteroids and comets.” The results, displaying the possible disks and their snow lines, are shown in the figure below: 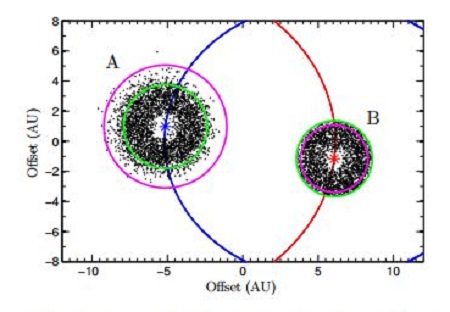 Image: Face-on circumstellar test-particle discs after ~ 103 periods shown with the stars close to periapsis. α Cen A is colour-coded blue (the left star and its orbit) and α Cen B is colour-coded red (the right star and its orbit). The green circles represent acrit around the stars and the magenta circles show estimates of their respective snow lines. Credit: Wiegert et al., taken from the paper.

We don’t yet know whether the excess at 24 µm the researchers found is a detection of warm dust or not — the paper describes the data as “marginal excesses” for both Centauri A and B, adding that “If due to circumstellar emission from dust discs, fractional luminosity and dust mass levels would be some 10 to 100 times those of the solar zodiacal cloud.” As we push deeper into the study of the nearest stars, we’ll use what we learn about dust emissions and their relation to stellar temperatures to study cool circumstellar disk possibilities around more distant targets.

The paper is Wiegert et al., “How dusty is α Centauri?” accepted at Astronomy & Astrophysics and available as a preprint. Thanks to Andy Tribick for the pointer to this one.