Learning that liquid water may exist beneath the surface of more than a few Solar System objects naturally raises astrobiological questions. But as Caleb Scharf notes in Water Erupts Across the Solar System, a much larger issue is whether the kind of chemoautotrophic microbes we find on Earth (Scharf calls them ‘rock eaters’) could have evolved there in the first place. Habitats that may support an Earth microbe aren’t necessarily capable of originating their own forms of life, although the question is obviously going to propel much future study.

What strikes me about a number of recent stories in these pages is how much what we see in our own and other solar systems may be the result of planetary migration, which can affect those water-bearing objects. Ceres is a case in point, and it was my reason for bringing up Caleb Scharf’s always interesting blog in the first place. In Scharf’s post, he takes note of the fact that Ceres is a bit too close to the Sun for comfort given its composition. Let him tell it:

So now we come to Ceres, a 600-mile wide body orbiting the Sun in a gentle ellipse that takes it between about 2.55 astronomical units from the Sun to 2.98 in the course of its 1,680 day year. Compared to distant Europa or Enceladus it is in a much more precarious position when it comes to water. This is a zone where there can be sufficient solar heating to cause the ‘boil-off’, or sublimation, of solid ice into the vacuum of space.

A relevant point given the fact that data from the Herschel Space Telescope have revealed what seem to be water plumes coming from the surface of the dwarf planet. Scharf continues:

The current data seem to suggest that this boil-off, like that of a cometary nucleus, is the more likely culprit for Ceres’s watery outbursts – coinciding with its closest approaches to the Sun. However it’s still possible that there is an interior layer where liquid water could exist, warmed by a rocky core and insulated by a frozen crust and prone to cryovolcanic eruption. 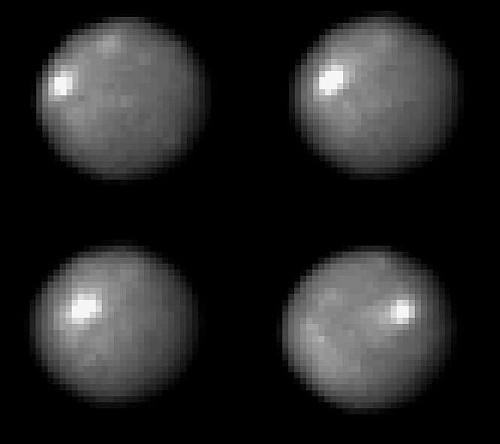 You can see the larger question behind all this, one relating to Ceres’ origins. We didn’t find reservoirs of water inside the smaller Vesta during the recent visit of the Dawn mission. Their orbits aren’t that dissimilar, and we’d like to know what factors gave Ceres the water that Dawn will be studying, among many other things, next year when it arrives. The assumption has to be that Ceres formed much further out from the Sun, which would imply a lot of movement in the early Solar System, likely triggered by migration of the giant outer planets. Maybe Dawn’s analysis of Ceres can give us some insights into the puzzle.

I hope so, because I agree with Scharf that “The eruption of water across the solar system is therefore not just a case of planetary indigestion, but another clue to the deeper origins and evolution of all that is around us.” As to why water implies a more distant origin, the ‘snow line’ of our Solar System is out around 5 AU, indicating a zone far enough from the Sun that water can condense into solid ice grains. We’re now learning, as we saw recently in Shaking Up a ‘Snow Globe’ Solar System, that main belt asteroids are far more diverse than we used to imagine, with the main belt representing only a small fraction of the initial asteroid population. 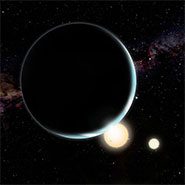 Planetary migration — the possibility of Jupiter closing to a Mars-like distance at some point in the early system — would have thoroughly mixed objects that formed in much different areas. How likely is such migration? We’re learning as we go, but recent work out of the University of Bristol extends the question interestingly to Kepler-34 (AB)b, a circumbinary planet that orbits not one but two stars. The work, published in Astrophysical Journal Letters, reports computer simulations showing that planets like these would have undergone migration.

Zoe Leinhardt (University of Bristol) is one of the researchers behind this work:

“Our simulations show that the circumbinary disk is a hostile environment even for large, gravitationally strong objects. Taking into account data on collisions as well as the physical growth rate of planets, we found that Kepler 34(AB)b would have struggled to grow where we find it now. Based on these conclusions for Kepler-34, it seems likely that all of the currently known circumbinary planets have also migrated significantly from their formation locations — with the possible exception of Kepler-47 (AB)c which is further away from the binary stars than any of the other circumbinary planets.”

Image: An artist’s conception of Kepler-34(AB)b which orbits a double-star system. Credit: David A. Aguilar, Harvard-Smithsonian Centre for Astrophysics.

Then, of course, we have the case of abundant ‘hot Jupiters,’ themselves thought to be the result of migration, forming well beyond the snow line but migrating through gravitational interactions to their present positions. Clearly issues of planetary migration are going to stay in the forefront of our attempt to understand how the planetary systems we observe evolved over time, and our own system gives us plenty to consider, as a watery Ceres reminds us.