Kepler-413b: Wobbles of a Circumbinary World

It was always a good bet that we’d get plenty of surprises as data from Kepler began to come in, but the odd world known as Kepler-413b really does stand out. The transit method seems made to order for a certain regularity — Kepler looks at how the light from a given star dims when a planet passes in front of it as seen from Earth. Slight changes in these transits can help us detect other worlds in the system or, perhaps, help us make future discoveries of exomoons. But what happens when the transit is so erratic that both these scenarios can be ruled out?

Veselin Kostov and team have exactly that situation on their hands. According to Kostov (Space Telescope Science Institute and Johns Hopkins University), the data for Kepler-413b show, over a period of 1500 days, three transits in the first 180 days, followed by 800 days with no transits at all. Following that, the researchers noted five more transits in a row. And according to their analysis, the next transit is not going to happen until 2020.

Intriguing, no? The planet is a Neptune class world in a circumbinary 66-day orbit around a close eclipsing binary, K- and M-class dwarf stars that eclipse each other every 10 days. The system is 2300 light years out in the constellation Cygnus, and the image below depicts its complexities. 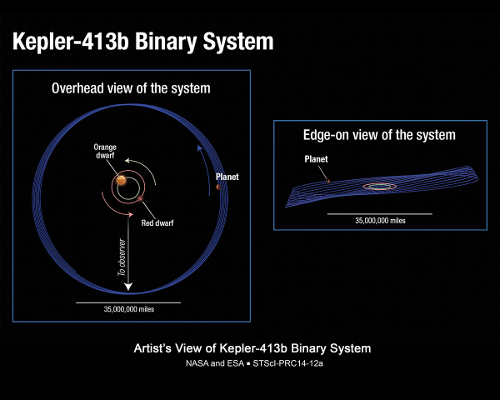 Image: This illustration shows the unusual orbit of planet Kepler-413b around a close pair of orange and red dwarf stars. The planet’s 66-day orbit is tilted 2.5 degrees with respect to the plane of the binary star’s orbit. The orbit of the planet wobbles around the central stars over 11 years, an effect called precession. This planet is also very unusual in that it can potentially precess wildly on its spin axis, much like a child’s top. The tilt of the spin axis of the planet can vary by as much as 30 degrees over 11 years, presumably leading to the rapid and erratic changes in seasons on the planet and any accompanying large moons. As Kepler views the system nearly edge on, sometimes the planet passes in front of the binary pair, and sometimes it does not. The next transit is not predicted to occur until 2020. This is due not only to the orbital wobble, but also to the small diameters of the stars and the fact that the orbital plane of the stars is not exactly edge-on to Kepler’s line of sight. (The vertical axis on the right panel is exaggerated by a factor of 10, for viewing purposes only.) Credit: NASA, ESA, and A. Feild (STScI).

The orbital plane of the stars is not edge-on, and as the caption notes, the planet’s orbit is titled 2.5 degrees with respect to the plane of the binary stars’ orbit. From Kepler’s vantage point, Kepler-413b’s orbit moves up and down continuously, accounting for why it often fails to transit its host stars. The wobble on the spin axis we see here is quite a contrast with the Earth, where the rotational precession amounts to 23.5 degrees over 26,000 years. The planet appears to be closer to its host stars than the inner edge of the habitable zone, with complex seasonal cycles and what the paper describes dryly as “interesting climate patterns.” Interesting indeed.

A key question now is whether there are other planets in this system that account for the tilt in Kepler-413b’s orbit, or whether a third star may be gravitationally bound to the system, thus exerting its own influence on the wandering world. That would give this unusual world the further distinction of being a circumbinary planet in a triple star system. We can also wonder whether there is a population of planets like this one whose transits we may be missing because we simply aren’t looking at their stars at the right time. Whatever the case, Kepler-413b gives us a useful circumbinary planet whose characteristics may prove helpful not only in terms of planet formation but questions of habitability outside of single-star planetary systems.

Next post: Unusually Red Brown Dwarfs (and What They Tell Us)