Unusually Red Brown Dwarfs (and What They Tell Us)

As we continue to learn more about brown dwarf atmospheres, the dwarf ULAS J222711-004547 catches the eye because of its unusually red appearance. What Frederico Marocco (University of Hertfordshire) and team have learned through observations with the Very Large Telescope in Chile is that a thick layer of clouds in the upper atmosphere is responsible for its tint. Marocco’s data analysis tells us we are seeing clouds made up of mineral dust. In this UH news release, he specifically mentions enstatite and corundum. The clouds are floating in a hot atmosphere of water vapor, methane and possible ammonia. 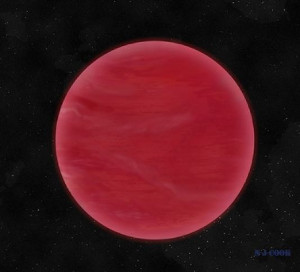 This brown dwarf may turn out to be uncommonly helpful. Thus Avril Day-Jones, a colleague of Marocco’s at the University of Hertfordshire, who contributed to the analysis:

“Being one of the reddest brown dwarfs ever observed, ULAS J222711-004547 makes an ideal target for multiple observations to understand how the weather is in such an extreme atmosphere. By studying the composition and variability in luminosity and colours of objects like this, we can understand how the weather works on brown dwarfs and how it links to other giant planets.”

Digging into the paper on this work gets us into brown dwarf evolution over time. Keep in mind that brown dwarfs, unable to ignite fusion in their core, cool down over time, so that they evolve along the spectral sequence from M to L, T and Y class objects (ULAS J222711-004547 turns out to be what the paper refers to as ‘a peculiar L dwarf’). The point is that the relationship between mass and spectral type is tricky with objects smaller than stars. An L-class object might be an old low-mass star, a young high-mass brown dwarf, or even a young planet.

Marocco’s team believes the brown dwarf in question falls into a category becoming known as ‘unusually red L dwarfs’ (URLs), with only nine of this class thus far identified. It is also unlikely to be a young object. And here’s where we get into what Day-Jones is talking about in terms of studying giant planets. From the paper (with internal references omitted for brevity):

Planetary-mass objects show similar near-infrared colours, like 2M1207b…and the HR8799 planets…and their photometric and spectroscopic properties are believed to be heavily influenced by the atmospheric condensates…URLs can therefore be considered a ‘bridge’ between brown dwarfs and giant planets atmospheres, thus a useful test bed for the atmospheric models. Also, these objects can be used as probes to understand the physics of dust clouds, and to disentangle the effects of surface gravity and metallicity in the L-type temperature regime.

Assuming high dust content in the photospheres of these unusually red brown dwarfs, the Hertfordshire team is able to derive a grain size in the atmosphere in the range of 0.5 μm. The paper suggests that both URLs and giant planets are characterized by thick clouds in the uppermost atmospheric layers, “probably caused by a combination of slightly low gravity and high metallicity.” As we learn more about how dust clouds form and behave in ultracool atmospheres, we’re probing the atmospheric dynamics of gas giant planets as well. Expect growing emphasis on variability studies as we examine how clouds move on these objects.