The first global geological map of Ganymede has become available through the efforts of a team led by Wes Patterson (Johns Hopkins Applied Physics Laboratory) and Geoffrey Collins (Wheaton College). The map doesn’t reproduce well in the small space I have available, but the image below gives you an idea of its layout and is linked to the download site at the U.S. Geological Survey, which is publishing it as USGS Scientific Investigations Map 3237. 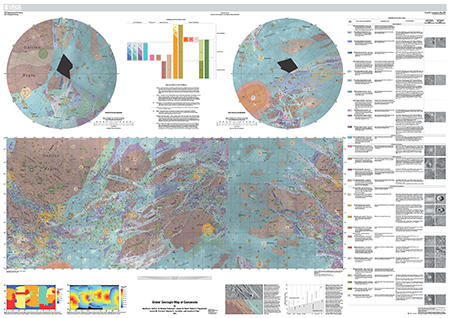 Image: Ganymede is the largest satellite of Jupiter, and its icy surface has been formed through a variety of impact cratering, tectonic and possibly cryovolcanic processes. Images of Ganymede suitable for geologic mapping were collected during the flybys of Voyager 1 and Voyager 2 (1979), as well as during the Galileo mission in orbit around Jupiter (1995–2003). This map represents a synthesis of scientists’ understanding of Ganymede geology after the Galileo mission. Credit: Wheaton College/JHUAPL/Brown University/JPL/USGS.

Ganymede is now the fourth planetary satellite to be mapped after our own Moon as well as the Jovian satellites Io and Callisto, a feat made possible by synthesizing data from multiple missions including the Voyagers and Galileo. The striking nature of Ganymede’s terrain is obvious from the contrast between lighter regions marked by grooves and ridges and apparently older, darker cratered areas. A map like this reminds us that the features we’re looking at are evidence not only of the moon’s internal changes but its interactions with the other Galilean satellites and the various small objects that have impacted its surface along the way. 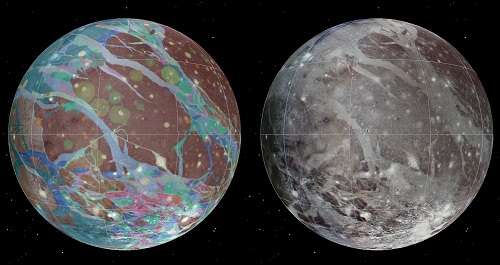 Image: To present the best information in a single view of Jupiter’s moon Ganymede, a global image mosaic was assembled, incorporating the best available imagery from Voyagers 1 and 2 and Galileo spacecraft. This image shows Ganymede centered at 200 west longitude. This mosaic (right) served as the base map for the geologic map of Ganymede (left). Credit: USGS.

Good maps, of course, are always refined as we collect better data, and on that score, we’re continuing to follow the fortunes of JUICE, the Jupiter Icy Moons Explorer, a planned European Space Agency mission selected in May 2012 with a proposed launch in 2022, arriving in the Jovian system in 2030. While JUICE is going to be studying Callisto and Europa as well, the plan is for the spacecraft to enter orbit around Ganymede after its other maneuvers in the system. A possible Ganymede Lander mission from the Russian Space Research Institute is also in the cards, although whether it becomes a partner to JUICE or flies at all is still in question. 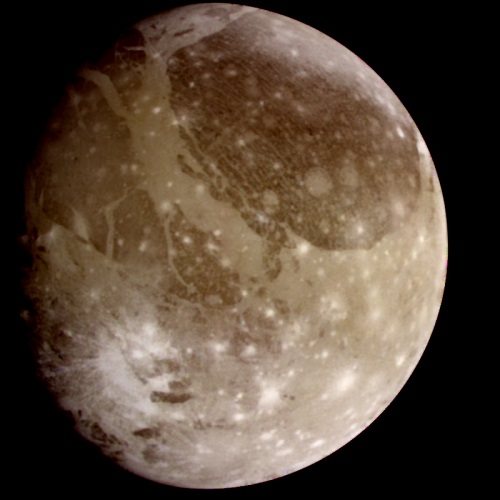 Image: This is a natural color view of Ganymede from the Galileo spacecraft during its first encounter with the satellite. North is to the top of the picture, and the sun illuminates the surface from the right. The dark areas are the older, more heavily cratered regions, and the light areas are younger, tectonically deformed regions. The brownish-gray color is due to mixtures of rocky materials and ice. Bright spots are geologically recent impact craters and their ejecta. The finest details that can be discerned in this picture are about 13.4 kilometers across. The images that make up this color photo were taken in June 1996. Credit: NASA/JPL.

The three moons to be visited by the JUICE mission are all the site of possible oceans beneath their ice, governing the instrument choices aboard the spacecraft, which will include cameras, spectrometers, a laser altimeter and an ice-penetrating radar. A dozen flybys are planned for heavily-cratered Callisto, and the mission’s two flybys of Europa will include measurements of the thickness of the ice crust. Settling in by 2033 into orbit around Ganymede, JUICE will not only study the moon’s structure but its magnetic and plasma interactions with Jupiter. Ganymede is the only moon in the Solar System known to generate its own magnetic field. 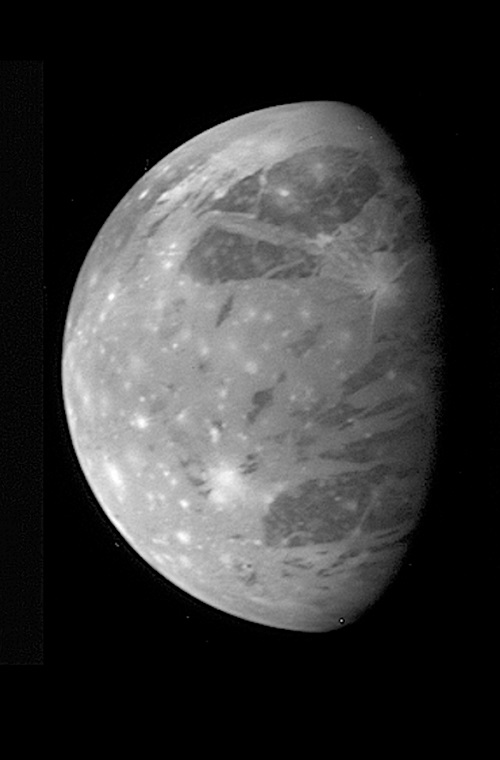 I include the image above because it’s a reminder how reliant we are on a small number of missions to get the data needed for the Ganymede map. We can only hope that JUICE flies per schedule and delivers what would obviously be a major data upgrade. Meanwhile, seeing the New Horizons image of Ganymede, taken as the spacecraft whisked past the Jovian system in 2007, gives renewed cause for celebration that all systems aboard that craft are sound as we prepare for next year’s flyby of Pluto/Charon and, let’s hope, a KBO encounter beyond.