Chemical Change in a Protoplanetary Disk

The young star known as L1527 offers a spectacular view at infrared wavelengths, a result of the configuration of gas and dust around it. Have a look at the image below, taken by the Spitzer Space Telescope, where light from the star escapes through the opening provided by a bipolar gas flow, illuminating the gas to highlight a nebula in the shape of a butterfly. Earlier radio studies of this star have shown that L1527 is surrounded by a gas disk that, from our perspective, is seen edge-on. Now new radio observations are helping us characterize the gas itself. 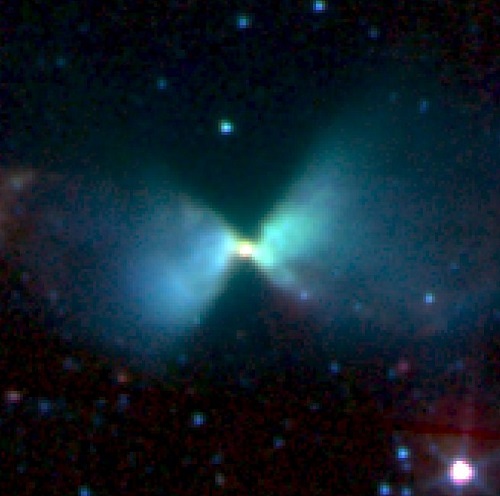 It’s an interesting investigation because the chemical changes inside a disk as it forms are little understood. Intense observational effort has gone into studying the physical structure of protoplanetary disks, but separating the young disk and the infalling envelope of gas and dust that gives rise to it is difficult. This is where the powerful sensitivity of ALMA (Atacama Large Millimeter/submillimeter Array, a radio interferometer array in Chile’s Atacama desert) may come to our aid. The new work, described in this news release from the University of Tokyo, is built around ALMA’s high spatial resolution observations to study the chemistry of disk formation.

Invisible in infrared light, the gas around L1527 can be readily examined at ALMA’s wavelengths, its molecules characterized in terms of their density, temperature and chemical composition. Researchers under Nami Sakai (University of Tokyo) have been studying the radio emission from cyclic-C3H2 (three carbon atoms in a loop-like structure with two hydrogen atoms attached) and sulfur monoxide (SO) molecules — these are emissions weak enough to be undetectable by other instruments, but within range of the ALMA array.

Because a new stellar system is formed through the gravitational collapse of interstellar materials, you would think that the interstellar gas and dust would simply be incorporated into the new disk structure as is. But Sakai and team have found something different: There is a chemical change associated with the formation of the disk. L1527’s disk has a radius of about 500 AU. Inside 100 AU, the emission from cyclic-C3H2 is weak enough to suggest chemical differentiation between the inner and outer disk. Meanwhile, SO seems to be concentrated in a ring-like structure with a radius of about 100 AU. The image below shows the result.

So we have a striking change in chemical composition about 100 AU out. Sakai’s simulations show that infalling gas from the outer parts of the disk is piling up at what he calls the ‘centrifugal barrier.’ Local heating in this region as the infalling gas accumulates causes distinct chemical changes. Here I’m going to quote Masaaki Hiramatsu (NAOJ Chile Observatory), who put together a backgrounder on Sakai’s work, describing the lively action around this ‘barrier’:

The infalling gas collides with the barrier and is warmed up. SO molecules frozen on the surface of cold dust grains are liberated into the gas phase. The temperature decreases inside the barrier and the SO molecules are frozen again. This is the formation process of the SO ring at 100 AU. Rotating motion dominates inside the centrifugal barrier. Hence, the barrier is the edge of the disk formation region in which eventually a planetary system will be formed.

I’m not aware of earlier work on the chemical differences between protoplanetary disks and the interstellar clouds out of which they form, or of any earlier evidence for major changes in the chemistry of the disk as it emerges. It’s worth asking whether similar situations will be traced in other protoplanetary disks, something that only future observation will tell us, with inevitable implications for how our own Solar System formed if this turns out to be a common process. The paper suggests that micro-analyses of meteorites, spectroscopy of comets, and sample return from the asteroids will help us extend this study to our own system’s formation.

The paper is Sakai et al., “Change in the chemical composition of infalling gas forming a disk around a protostar,” published online in Nature 12 February 2014 (abstract).