Following up on yesterday’s post on Gaia, it seems a good time to discuss PLATO, the European Space Agency’s planet hunting mission, which has just been selected for launch by ESA’s Science Policy Committee. The agency’s Cosmic Vision program has already selected the Euclid mission to study dark energy (launch in 2020) and Solar Orbiter, an interesting attempt to study the solar wind from less than fifty million kilometers. Solar Orbiter will surely return data we’ll want to discuss here in terms of magsails, electric sails and other ways to harness a solar wind about which we have much to learn.

Solar Orbiter’s launch is the closest of the three, scheduled for 2017, with PLATO pegged for 2024, the launch to be from the European spaceport in Kourou (French Guiana) aboard a Soyuz booster. Note that date, because it’s expected, as this BBC story notes, that the ground-based European Extremely Large Telescope (E-ELT) will be operational in Chile by 2024, a reminder that it should be powerful enough, with its 39-meter primary mirror, to carry out studies of planetary atmospheres as determined by targets PLATO can provide. 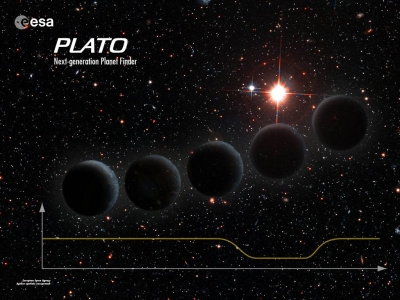 The mission will operate from the L2 Lagrangian point 1.5 million kilometers from the Earth, from which vantage PLATO will turn 34 individual telescopes and cameras on to a field of view that encompasses half the sky. Up to a million stars will be under investigation, looking for the characteristic lightcurve of a planet transiting the star as seen from Earth. PLATO will also have a strong asteroseismology component, allowing even more precision in characterizing its planetary finds, especially since these will be followed up with ground-based radial velocity observations that will benefit from having data on surface pulsations on target stars.

Thus PLATO’s unravelled acronym: PLAnetary Transits and Oscillations of stars. The ultimate goals are exactly those we’d expect: To discover and characterize relatively nearby planetary systems, detecting Earth-sized planets and ‘super-Earths’ in the habitable zone around solar-type stars while measuring solar oscillations in the host stars. Working at optical wavelengths, PLATO should be able to determine planetary mass with a precision of 10 percent, planetary radius with a precision of 2 percent and stellar age up to 10 percent.

The BBC quotes Don Pollacco (University of Warwick, leader of the PLATO Science Consortium), on how the mission differs from those that have gone before:

“PLATO will be our first attempt to find nearby habitable planets around Sun-like stars that we can actually examine in sufficient detail to look for life. Nearly all the small transiting planets discovered so far have been beyond our technology to characterise. PLATO will be a game-changer, allowing many Earth-like planets to be detected and confirmed and their atmospheres examined for signs of life.”

The contrast is, of course, with Kepler, whose stars — in a magnitude range between 7 and 17 — were faint enough that follow-up studies for the majority of candidates are difficult if not impossible. The interesting Lost in Transits blog, written by a PhD student at the University of Warwick and thus likely connected with Don Pollacco at the same school, points out that Kepler’s wide field and large camera array will be turned to brighter stars (magnitude 4-16) with equipment sufficient to follow up even small Earth-class planets around these stars. The blog also points to the effectiveness of asteroseismology in this work:

This ability to survey bright stars also allows astronomers to perform extremely sensitive measurements of the stars themselves. By using variations in starlight caused by ripples on the star’s surface, astronomers can accurately pin down not only the size of the star but also the age of the star system. This means, not only can Plato find exoplanets around bright stars, but it can also determine the size and age of many of these planets to a precision only previously dreamed of.

Ahead for PLATO are further refinements and finalization of the design, along with selection of an industrial prime contractor and, within the next two years, the final adoption of the mission, but the support given by the ESA Science Policy Committee, unanimous, strengthens our hopes that PLATO will fly. The fudge factor in that statement simply reflects the disappointments we’ve seen on both sides of the Atlantic with missions like SIM (Space Interferometry Mission) and the Darwin astronomical interferometer all showing promise only to face cancellation. Budgetary realities are always to be reckoned with, but PLATO’s selection is welcome news indeed.