A Formation Mechanism for Pulsar Planets?

CSIRO, the Commonwealth Scientific and Industrial Research Organisation in Australia, is announcing the detection of violent events around the pulsar PSR J0738-4042, some 37,000 light years from Earth in the constellation Puppis. This southern hemisphere constellation was originally part of a larger constellation called Argo Navis, depicting the ship made famous by the journey of Jason and the Argonauts. But Argo Navis was divided into three smaller constellations, leaving Puppis (The Stern) as something of a mythological fragment. 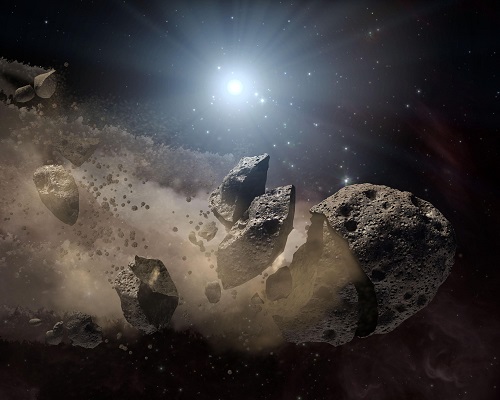 Image: An artist’s impression of an asteroid breaking up. Credit: NASA/JPL-Caltech.

Whatever its origins, Puppis is also home, from our Earthly perspective, to a pulsar around which radiation and sleeting high energy particles are common. Ryan Shannon, a member of the CSIRO research team, has previously examined how an infalling asteroid from a violent disk around a pulsar might affect it, slowing the pulsar’s spin rate and affecting the shape of the radio pulse that we see on Earth. That’s a useful signal, because pulsars flash a radio beam with great regularity, so that any disruptions call attention to themselves. Says Shannon:

“That is exactly what we see in this case. We think the pulsar’s radio beam zaps the asteroid, vaporising it. But the vaporised particles are electrically charged and they slightly alter the process that creates the pulsar’s beam.”

Long term monitoring has shown that the pulse shape of PSR J0738-4042 changes multiple times between 1988 and 2012, with one event that implies a rock of about a billion tonnes interacting with the pulsar. The abstract of the paper on this work summarizes the finding:

The torque, inferred via the derivative of the rotational period, changes abruptly from 2005 September. This change is accompanied by an emergent radio component that drifts with respect to the rest of the pulse. No known intrinsic pulsar processes can explain these timing and radio emission signatures.

And so we get an interesting mechanism for the formation of large objects around a pulsar. Dust and debris formed in the original stellar explosion that gave birth to the pulsar itself could fall back toward the spinning remnant to create a debris disk that, in turn, gives birth to larger objects. Recall that two planet-sized objects were detected in 1992 around the pulsar PSR 1257+12, though not necessarily formed by the same mechanisms (a third planet was detected five years later). We have much to learn about the various ways pulsar planets may form.

The environment that spawns these results has to give us pause. “If a large rocky object can form here,” Ryan Shannon adds, “planets could form around any star.” True enough, though we should add that pulsar planets still seem to be the rarest of the breed. In any case, this detection is remarkable. We’re reaching out to a distance far larger than that between the Earth and the galactic core to track conditions in this system. With so many ongoing projects, we can all too easily become blasé about just what is happening here, but let’s keep that sense of wonder at full throttle. Twenty-five years ago we had no confirmed exoplanets, and now we’re investigating asteroids in a system 37,000 light years from Earth? A golden era of discovery indeed…