I’ve had pulsars on the mind the last couple of days after our discussion of PSR 1257+12 and its contribution to exoplanetology. A bit more about pulsars today and the way we look at extreme objects through science fiction. PSR 1257+12 was discovered in 1990 by Aleksander Wolszczan using data from the Arecibo dish, and it was in 1992 that Wolszczan and Dale Frail published a paper outlining their discovery of the first planets ever found outside our Solar System. The two planets were joined by a third in 1994, but evidence for a fourth was later shown to be mistaken. In any case, the three planets confounded many astronomers, who hardly expected the first extrasolar planets to be found orbiting a radiation-spewing neutron star.

Centauri Dreams regular Al Jackson was co-author of a 1992 study of PSR1257+12 that examined orbital resonance in the planets around the pulsar. In a note last night, Al mused “Just think of a K2 civilization setting up a research station on one of those to study a pulsar – maybe someone has written the SF story?” I can’t think of a story specifically targeting a pulsar planet, though if memory serves, Alastair Reynolds deals with a pulsar in one of the early Revelation Space novels. But the notion reminds me of other extreme environment classics like Hal Clement’s Mission of Gravity (1954), which covers the fantastically spinning world Mesklin, where surface gravity gets up close to 700 g at the poles (the complete Mesklin material is available in the collection Heavy Planet: The Classic Mesklin Stories, an Orb title from 2002).

High-energy environments are made to order for hard science fiction. Consider what our best authors might do with this: The pulsar IGR J11014-6103, now the subject of observations by the Chandra X-Ray Observatory, is producing a jet of high-energy particles that this Chandra news release claims is the longest of any object in the Milky Way, a whopping 37 light years. The pulsar is moving away from a supernova remnant in the constellation of Carina at a speed somewhere between 1100 and 2200 kilometers per second, making it one of the fastest moving pulsars yet observed. 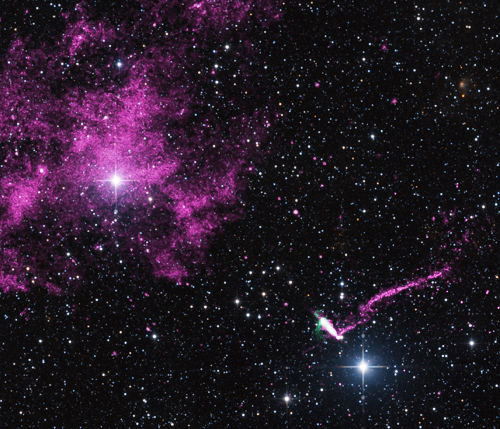 Image: An extraordinary jet trailing behind a runaway pulsar is seen in this composite image that contains data from NASA’s Chandra X-ray Observatory (purple), radio data from the Australia Telescope Compact Array (green), and optical data from the 2MASS survey (red, green, and blue). The pulsar – a spinning neutron star – and its tail are found in the lower right of this image. The tail stretches for 37 light years, making it the longest jet ever seen from an object in the Milky Way galaxy. Credit: X-ray: NASA/CXC/ISDC/L.Pavan et al, Radio: CSIRO/ATNF/ATCA Optical: 2MASS/UMass/IPAC-Caltech/NASA/NSF.

A 37 light-year jet is remarkable enough (nine times the distance to Proxima Centauri!), but we also find that there is a corkscrew pattern in the jet suggesting that the pulsar is wobbling as it spins. In addition, it’s producing a comet-like tail behind it due to the effects of a pulsar wind nebula (PWN) — a sheath of high-energy particles that enshrouds the pulsar. And while a pulsar’s direction of motion is usually aligned with its jet and the pulsar wind nebula around it, IGR J11014-6103’s own PWN is almost perpendicular to the direction of the jet, possibly indicating high rotation speeds in the iron core of the supernova that produced the pulsar. 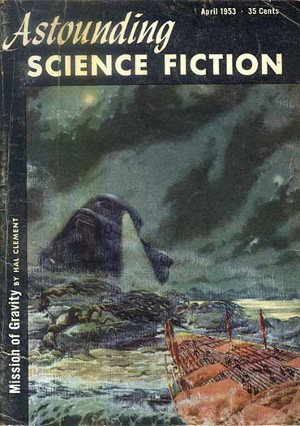 It’s fascinating to explore such extreme environments, and one of the things I love about science fiction is that a combination of scientific rigor and imagination can let us see things like this up close. Clement’s Mesklin was put together using a carefully wrought model that the author went on to describe in an article called ‘Whirligig World,’ which ran in Astounding Science Fiction in June of 1953. He based it on an object then believed to exist in the 61 Cygni system, and although the latter turned out to be a chimera, his concern for getting the science right built a memorable world we can still enjoy reading about today. Now who will take up Al Jackson’s challenge to describe a research station on a pulsar planet?

Image: The April, 1953 issue of Astounding contained the first installment of Hal Clement’s Mission of Gravity, published in book form the following year.

Previous post: Tau Boötis b: A ‘3-D’ Look at Star and Planet