A planet like Kepler-296f is bound to get a lot of publicity. Orbiting a star half the Sun’s size and only five percent as bright, this world, twice the size of the Earth, appears to orbit in the habitable zone, where liquid water could exist on its surface. We focus so much on the potential of life that the four planets announced yesterday (out of 715 newly verified worlds) inevitably get special treatment. And we learn that Kepler-296f exists in a system with four other planets, orbiting the star every thirty days. What we don’t know is whether we’re dealing with a small Neptune-class world surrounded by a thick hydrogen/helium atmosphere or a water world with a deep ocean.

An interesting world, to be sure, but the real story in yesterday’s announcements from the Kepler team has to do with the ‘verification by multiplicity’ technique used to validate the existence of so many planets in 305 star systems. One of the findings papers titled “Almost All of Kepler’s Multiple Planet Candidates are Planets” (to be published March 10 in The Astrophysical Journal) makes the case that the vast majority of Kepler’s multiple planet candidates are true multi-planet systems, the number of false positives lower for multiples than for single detections. The paper continues (internal citations removed for brevity):

Kepler has found far more multiple candidate systems than would be the case if candidates were randomly distributed among target stars. False positives are expected to be nearly randomly distributed among Kepler targets, whereas true transiting planets could be clustered if planets whose sizes and periods are adequate for transits to be detected often come in multiples, as is the case for planets detected by radial velocity variations, and/or if planetary systems tend to be flat, so geometry leads to higher transit probabilities for other planets if one planet is seen to transit.

The paper gives a blow by blow description of the statistical analysis used here, but for our purposes, Kepler looked at over 150,000 stars and found only a few thousand that showed the characteristic lightcurve of a planetary transit. If this transit-like pattern were random, only a few stars would have shown more than one pattern, but we find hundreds of stars that have multiple transit-like patterns. As Jack Lissauer (NASA Ames) pointed out in yesterday’s teleconference, multiplicity is not random. Instead, it is a technique for opening up what Lissauer calls the ‘planetary verification bottleneck.’ Joining Lissauer in the teleconference were Jason Rowe (SETI Institute), Douglas Hudgins (NASA Astrophysics Division), and Sara Seager (MIT). 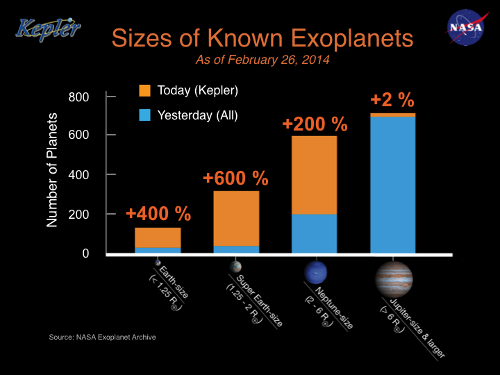 Lissauer talks about the method as a way ‘to verify multiple planet candidates in bulk to deliver planets wholesale,’ and it yields 715 worlds of which 94 percent are smaller than Neptune, in the process establishing that multiple planet systems around a single star are common. The number of confirmed exoplanets now nears 1700. Besides Kepler-296f, three other verified worlds are less than 2.5 times the size of Earth and orbiting in their star’s habitable zone.

Overall, these results offer the largest number of validated planets ever to be announced at one time, a number sufficient for the transit technique to overtake radial velocity as the most prolific technique for exoplanet detection. And as Jason Rowe pointed out, these results show us small planets in multiple planet systems that move in circular, flat orbits, a configuration not unlike what we find in our own inner Solar System. “The more we explore,” Rowe added, “the more we find familiar traces of ourselves amongst the stars that remind us of home.”