The Kepler announcements yesterday were greatly cheering to those of us fascinated with the sheer process of doing exoplanetology. The ‘verification by multiplicity’ technique propelled the statistical analysis that resulted in 715 newly verified worlds, and we have yet to turn it loose on two more years of Kepler data (check Hugh Osborn’s excellent Lost in Transits site for more on the method). For those who focus primarily on habitable worlds, the results seemed a bit more sparse, with just four planets found in the habitable zone. And even where we find such, there are reasons to wonder whether a ‘super-Earth’ could actually sustain life.

Apropos of this question, a team of researchers led by Helmut Lammer (Austrian Academy of Sciences) has just published the results of its modeling of planetary cores, looking at the rate of hydrogen capture and removal for cores between 0.1 and 5 times the mass of the Earth found in the habitable zone of a G-class star. Cores like these inevitably attract hydrogen from the surrounding protoplanetary disk, although some of it will be stripped away by ultraviolet light from the hot young star they orbit. The question is, can enough of this primordial hydrogen envelope be blown off to allow the formation of a more benign secondary atmosphere?

The results are not promising for even relatively small super-Earths. Planetary cores with a mass similar to the Earth capture a hydrogen envelope and can also lose it — the paper suggests that terrestrial planets like Mercury, Venus, Earth and Mars lost their proto-atmospheres because of ultraviolet light. But high-mass cores similar to many of the super-Earth discoveries like Kepler-62e and -62f, wind up with atmospheres much thicker than ours. The habitable zone isn’t enough to guarantee a habitable world, as Lammer notes:

“Our results suggest that worlds like these two super-Earths may have captured the equivalent of between 100 and 1000 times the hydrogen in the Earth’s oceans, but may only lose a few percent of it over their lifetime. With such thick atmospheres, the pressure on the surfaces will be huge, making it almost impossible for life to exist.” 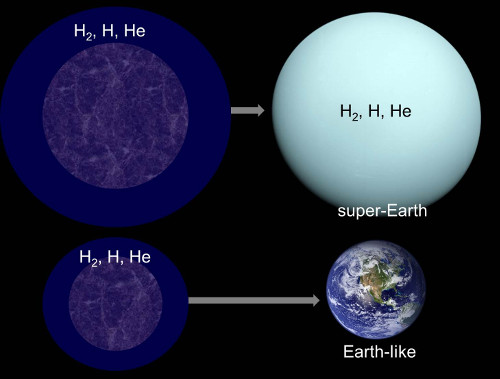 Image: The mass of the initial rocky core determines whether the final planet is potentially habitable. On the top row of the diagram, the core has a mass of more than 1.5 times that of the Earth. The result is that it holds on to a thick atmosphere of hydrogen (H), deuterium (H2) and helium (He). The lower row shows the evolution of a smaller mass core, between 0.5 and 1.5 times the mass of the Earth. It holds on to far less of the lighter gases, making it much more likely to develop an atmosphere suitable for life. Credit: NASA / H. Lammer.

The constraints here get to be pretty tight. Let me quote the paper on this:

Therefore we suggest that ‘rocky’ habitable terrestrial planets, which can lose their nebula-captured hydrogen envelopes and can keep their outgassed or impact delivered secondary atmospheres in habitable zones of G-type stars, have most likely core masses with 1±0.5M⊕ and corresponding radii between 0.8–1.15R⊕. Depending on nebula conditions, the formation scenarios, and the nebula life time, there may be some planets with masses that are larger than 1.5M⊕ and lost their protoatmospheres, but these objects may represent a minority compared to planets in the Earth-mass domain.

The super-Earths we’re likely to find in habitable zones, according to this work, are going to be uninhabitable places with hydrogen dominated atmospheres. The paper goes on to note that, based on its results, there may well be Earth-size and mass planets that have not been able to shed their captured, nebula-based hydrogen envelope. The upshot: Extreme caution is advised when speculating about how habitable planets evolve, particular when mass and density are still problematic. The variety of outcomes is wide even for small worlds inside the habitable zone.

The paper is Lammer et al., “Origin and Loss of nebula-captured hydrogen envelopes from “sub”- to “super-Earths” in the habitable zone of Sun-like stars,” accepted at Monthly Notices of the Royal Astronomical Society (preprint).