Toward an Extraterrestrial Paradigm

Growing up in the Sputnik era, I followed the fortunes of space exploration with huge enthusiasm. In those days, the model was primarily planetary in nature, the progression from the Moon to the nearest planets and then beyond seemingly inevitable. At the same time, a second model was developing around the idea of space stations and self-contained worlds built by man, one that would reach high visibility in the works of Gerard O’Neill, but one that ultimately reached back as far as the 1920’s (Oberth and Noordung) and further back to the science fiction of Jules Verne. In fact, E. E. Hale’s “The Brick Moon” explored a space station as early as 1869.

But even as our Mariners and Veneras explored other planets, an interstellar thread was also emerging. Robert Goddard wrote about interstellar journeys in 1918, science fiction was full of such travel as the field matured in the 1940s and ‘50s, and serious scientific study of interstellar flight became established by mid-century. Writing in 1979, Michael Michaud could point to Project Daedalus as the first serious starship design, and could note the continuing work of Robert Forward in presenting what he thought of as a roadmap for interstellar expansion.

Reasons for the Journey

It’s useful to frame these issues by seeing how they have been examined in the past, for if we are beginning to adapt to what Michaud calls an ‘extraterrestrial paradigm,’ it is because we have, in reaction to technological breakthroughs and exploration, been forced to adjust our ideas about our place in the cosmos. Michaud’s “The Extraterrestrial Paradigm: Improving the Prospects for Life in the Universe” pulls together his own prior work in the Journal of the British Interplanetary Society and the thinking of the scientists and scholars of the day to make the case for a human culture that will expand to the stars out of choices made in the service of a newly emerging sense of purpose. 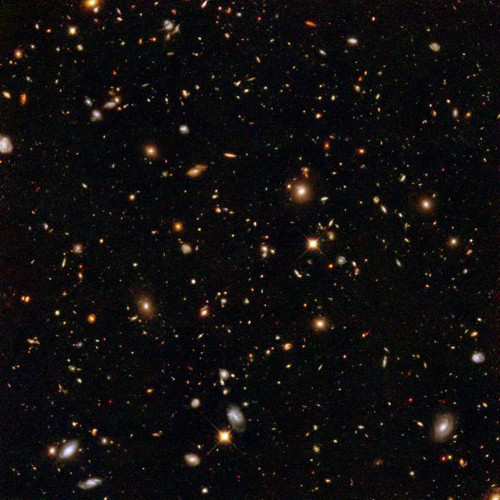 Image: Aswarm with galaxies, this part of the Hubble Ultra Deep Field survey cuts across billions of light-years. Such glimpses of immensity make us ponder the purpose behind human exploration of the cosmos. Credit: NASA, ESA, and R. Thompson (Univ. Arizona).

Solving the riddle of purpose must underlie all our explorations. Why, after all, do we choose to go into space in the first place? Robert Jastrow could find meaning in the linkage between cosmology and the workings of evolution, believing that persistent struggle and striving gave purpose to our existence. Michaud looks toward the loss of energy and structure we call entropy and asks whether life and the intelligence that can grow out of it are the only chance to reverse entropy on a local scale, and in his memorable phrase, “to impose choice on inevitability.”

Michaud’s essay deserves a wider audience, published originally in the academic journal Interdisciplinary Science Reviews and unavailable online. For the choices we make going forward are going to be continuous, given the decades- and probably centuries-long commitment that reaching the stars will require. But the extraterrestrial paradigm begins right here in our own system as we adapt our philosophy and perhaps one day our biology to moving off-planet. And while we have made the case for exploration and scientific research in spaceflight all along, Michaud here explores social and economic issues and the long term survival of the species as key drivers for the development of this new framework.

Expanding the economy beyond Earth’s limits allows us to surmount huge issues of resource depletion on the home world while developing new industrial processes in space. Earth’s energy demands can be met by abundant solar energy at the same time that we expand the human ecosphere to create new habitats beyond the Earth, perhaps modifying existing habitats through terraforming or other means. Moreover, the creation of a multitude of separate biospheres ensures us against collective disaster, whether natural or man-made. In terms of human liberty, freedom is enhanced and diversity encouraged as we experiment with new societies separate from those on Earth. All of these work together in shaping the extraterrestrial paradigm.

Centauri Dreams readers will be familiar with Michaud’s work in these pages, and also with his long-term commitment to developing a strategy for human expansion to the stars. His JBIS work in the late 1970s — three papers collectively known as “Spaceflight, Colonization and Independence: A Synthesis,” drawn on heavily in this essay — extends the colonization and humanization of the Solar System to an outward push to other star systems, one that by its nature changes who we are as we make the choice of who to become.

For humans, Michaud believes, must create their own goals in the absence of a pre-determined purpose imposed on them. The future, on this planet or elsewhere, depends on an evolutionary paradigm that relies on technology as a way to extend human influence into larger environments. It’s a view that suggests an inevitability about the rise of life and intelligence, but this determinism is modulated by chance as well as individual and social choice. That choice offers us the opportunity to bring meaning into the cosmos. As Michaud puts it:

The extraterrestrial paradigm suggests such goals: endless growth, expansion and discovery, the enrichment and rediversification of the species, and the increasing of human knowledge and power in the universe. Extraterrestrial growth could be a grand shared enterprise for humanity. It would define Homo sapiens by contrast with the external environment into which we ventured, and by contrast with nonexpanding forms of life and possibly intelligence on Earth. It suggests a way to free humans of Darwinian competition among themselves.

Above all, Michaud believes that the development of the extraterrestrial outlook helps us create a purposeful place for ourselves in the greater cosmos:

It suggests that, by our own activities, we can ensure the survival of our species, our intelligence, our consciousness, our culture, and that we can make intelligence have an impact on an inanimate, unfeeling universe, giving at least part of it an intelligent purpose. Thus the extraterrestrial paradigm may be an essential part of building a new cosmic context for mankind. It could be the basis for a sort of cosmic humanism that might be a factor in the philosophical history of the future.

Survival of the species demands short-term practical thinking but also the development of shared, long-term purpose, the latter more distant in time and requiring consensus and commitment. It may be that our movement into space expresses that purpose. But there are numerous challenges to the notion, all of which Michaud addresses in his essay. Tomorrow I’ll run through objections to this cosmic context, and go on to discuss how SETI comes into play. What happens to our own sense of purpose if and when we run into another intelligence?