Yesterday I wrote about what Michael Michaud calls ‘the new cosmic humanism,’ looking back at an essay the writer and diplomat wrote for Interdisciplinary Science Reviews in 1979. Intelligence, Michaud believes, creates the opportunity to reverse entropy at least on the local scale, and to impose choice on a universe whose purpose we do not otherwise understand. Continuing growth into space, expansion and discovery are the kind of long-term goals humans can share, highlighting the extension of knowledge and the rediversification of our species.

What Michaud is talking about is nothing less than a mission statement for extraterrestrial man, one that trades off a key uncertainty: In the face of an indifferent universe, intelligence itself may prove to be an evolutionary quirk that is of little consequence. Whether or not this is the case could depend on the decisions and purposeful choices of intelligent beings, assuming they choose to expand into the cosmos. Let me quote Michaud on this:

Intelligent beings evolved from planets can do that [i.e., influence the universe] only by adopting extraplanetary models of their futures, by committing themselves to purposes for the species that reach beyond individual lifetimes, and perhaps eventually by adopting goals that reach beyond the species itself. If evolution suggests any ultimate moral task, it is survival; intelligent beings with technology and social purpose are equipped with unique means to assure it. 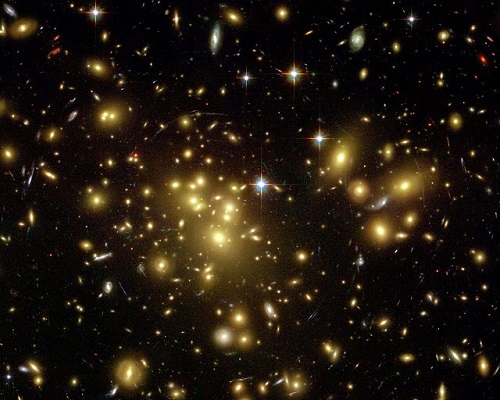 Image: The galaxy cluster Abell 1689, as seen from NASA’s Hubble Space Telescope. Faced with such immensity, what role do we assign intelligence in the ultimate fate of the universe? Credit: AFP/NASA.

The Price of Purpose

What Michaud calls cosmic humanism is not without its detractors, whose case emerges on practical grounds, and the author is wise to present it in the context of his larger argument. Anyone involved with the space community is challenged to explain why we should be looking beyond the Earth when we have so many problems here. Zero-sum arguments suggest that money spent on space is money taken away from social programs, leaving space advocates to argue the technological benefits that have accrued from the space program and future savings in areas like power generation.

These are arguments the space community has to be prepared to engage in with tangible benefits and a sensible eye toward budget realities. The moral argument can be trickier, and it also becomes ideological. Is space expansion just another way of imposing human chauvinism or preserving a Western model of industrial growth, a kind of futuristic ‘manifest destiny’? Is it in fact a thinly cloaked imperialism that turns the conflict of nation states into a model for future human conflict on other worlds, perhaps imposing our values on alien cultures?

We also run into the issue of limits. Michaud cites Philip Morrison, who has criticized the idea that there is any imperative for human expansion, arguing that as finite beings, we should be more attuned to our own limits. Added to this is the understandable argument that we have evolved in a biosphere for which we are now uniquely suited, and that expansion to other worlds would dilute and transform the species. Whether this is something to be deplored or celebrated is controversial, but certainly Michaud falls into line with Freeman Dyson as seeing diversification in society and ultimately biology as inevitable outcomes of an interstellar culture.

Behind all these objections lies the undeniable fact that a wide range of futures is within the realm of human choice, a philosophical stance varying from bounded to unbounded, a closed model vs. one open to expansion. Michaud points out that the window of opportunity for making a choice for the extraterrestrial paradigm is not necessarily infinite. We may run into serious issues of resource depletion within the next century that stymie our hopes for expansion.

Whether we take these outward steps depends on our motivations, on the values of our most powerful societies, and on political events within and between them. One might argue that, without an external goal, the world’s nations may have no purpose other than the periodic redistribution of wealth, status and power, often by force. By pointing out the promise of an extraterrestrial future, one might strengthen the case for solving current problems so that such a future can be realized.

Evolution of an Extraterrestrial Ethos

We cannot know what our species will ultimately choose, or whether natural or self-inflicted disaster will punctuate or even end future attempts at expansion into space. But what if our own extraterrestrial paradigm runs into the paradigm of another species? We may encounter, in the distant future, intelligent species that have chosen for their own reasons not to expand, perhaps through a lack of nearby destinations and resources or because of cultural values incompatible with colonizing other worlds. Or we may find expansionist beings whose interest is in shaping the universe to their own design to form a noosphere of interstellar dimension.

Here we can see Michaud the diplomat at work, asking how we might handle inevitable questions of contact and cooperation, subjects he would later address in Contact with Alien Civilizations: Our Hopes and Fears about Encountering Extraterrestrials (Copernicus, 2006). Would the need for survival of a single species lead to conflict between it and the newly discovered others, a Darwinian struggle that could produce permanent limits to growth? We will need to be thinking about such issues down the road if interstellar travel ever becomes a reality, for ultimately we will be called upon to make ethical decisions — the hard currency of intelligence — involving both survival and altruism.

For intelligence to survive, shared purpose will need to come to the fore in our dealings with other civilizations, with an emerging macro-intelligence being made up of the individual contributions of cultures in control of their local sphere of space. Such a ‘conscious universe’ gives itself purpose through its own survival and the effort to impose structure and meaning upon the cosmos. If intelligence is to have a long-term purpose, something like this may be it.

And if we are alone in the universe? Just as I was thinking about these issues yesterday I ran across Vinton Cerf’s What If It’s Us?, a short essay on the Communications of the ACM website. Cerf will be known to Centauri Dreams readers and almost all digitally aware people as the father of the TCP/IP protocols that are at the heart of the Internet. He’s also fascinated with the human future in space, and when I read his new piece, I found a useful synergy with what Michael Michaud is saying in “The Extraterrestrial Paradigm.”

Cerf was at a conference held by the Internet Society to discuss the emerging protocols for interplanetary communication when guest speaker David Brin asked what we would do if there were no other civilizations out there. What if we are the ones who are supposed to light the galaxy? If our species is destined to bring intelligence into at least the local cosmos and, in Michaud’s terms, impose choice on inevitability, just think of the responsibility that places upon us. Do we have the capacity as a species to survive long enough to make it happen? Cerf’s thought echoes Michaud:

I cannot speak for anyone else, but I think I would think somewhat differently about a lot of things. I would be thinking more long-term and be worried about the sustainability of our planet and the species that inhabit it. I would wonder what we should be developing to fulfill this mission. What technologies do we need to expand beyond our planet and our solar system? How should we prepare ourselves for such an ultimate goal?

Either way, you see, we face the need for sustained vision and developing purpose, our choices governing the outcome either here on among the stars. We must be prepared, as Michaud explains, to impose that purpose on a cosmos in which intelligence is rare just as we are prepared for possible contact with other species whose ideas on these matters may differ. Culturally, developing an outward-looking paradigm is not the work of years or decades but of centuries, requiring sustained effort and continuing debate. Those who choose to ponder these things on the public stage are playing a valuable role in the evolution of human purpose. They are helping us create the interstellar mission statement that will guide our way forward.