Whether or not they’re suitable for life, habitable zone ‘super-Earths’ are seeing increased scrutiny around M-class dwarf stars because the mass ratio of planet to star makes detection easier than around more massive stars. We need radial velocity surveys to help us here because planets on orbits longer than 200-300 days will definitely be out of Kepler’s reach. Moreover, while Kepler targets many K, G and F-class stars, M-dwarfs aren’t bright enough to show up in large numbers in its field of view, making occurrence rates around such stars problematic.

A 2013 paper by Courtney Dressing and David Charbonneau (Harvard-Smithsonian Center for Astrophysics) found that the Kepler sample contains 3897 stars with estimated effective temperatures below 4000K. Out of these, 64 are planet candidate host stars, with 95 candidate planets orbiting them. The researchers deduced from their analysis that about 15 percent of all red dwarfs have an Earth-sized planet in the habitable zone. Ravi Kopparapu (Penn State) recast these results with a revised set of habitable zone parameters. The result: Four out of ten of the nearest small stars are likely to have planets in the habitable zone.

These results are fascinating because they suggest that the nearest habitable planet could be as close as seven light years away. Bear in mind that we know of eight stars within 10 light years of the Sun that fit this definition, so we might find three Earth-sized planets in habitable zones in relatively nearby space. We looked at Kopparapu’s work in Habitable Zone Planets: Upping the Numbers about a year ago, noting that his work on an improved climate model (developed with Penn State’s James Kasting) allows the habitable zone to be moved out further from the host star than it had been before, another finding with promising astrobiological implications.

Now we have word of a new study from Mikko Tuomi (University of Hertfordshire) and colleagues, who have combined data from the HARPS (High Accuracy Radial Velocity Planet Searcher) and UVES (Ultraviolet and Visual Echelle Spectrograph) instruments operated by the European Southern Observatory in Chile. Using Bayesian signal detection criteria and noise models that take into account correlations in the data, the team found three habitable zone super-Earths among eight new planets it discovered orbiting nearby red dwarfs. The stars — GJ 27.1, GJ 160.2, GJ 180, GJ 229, GJ 422, and GJ 682 — are between 15 and 80 light years away, with planetary orbital periods ranging from two weeks to nine years. The researchers were also able to conﬁrm the existence of a companion around GJ 433. 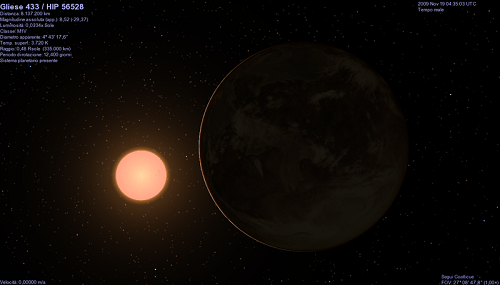 Image: Recent work confirms the existence of a long-period planet around the M-class dwarf GJ 433, about 30 light years from the Sun. Credit: Wikimedia Commons.

But the paper has implications well beyond these new worlds, for Tuomi’s group went on to calculate, using the estimated detection probability function, the occurrence rate of low-mass planets around nearby M-dwarfs. Habitable zone super-Earths, their paper deduces, should orbit at least a quarter of the red dwarfs in the Sun’s neighborhood. The paper on this work compares these results briefly with the Kepler work of Dressing and Charbonneau, but notes a key difference:

…such a comparison is not necessarily reliable because the properties of Kepler’s transiting planet candidates can only be discussed in terms of planetary radii and the radial velocity method can only be used to obtain minimum masses. Because of this, it is not surprising that there are remarkable differences that are unlikely to arise by chance alone.

So we emerge with somewhat different occurrence rates, with Tuomi’s team finding habitable zone super-Earths occurring in a range between Dressing and Charbonneau’s 15 percent and Kopparapu’s 40 percent. Bear in mind that the radius of some of the planet candidates in both the Dressing and Charbonneau paper as well as Kopparapu’s may change later with more accurate observations of the host star, a possibility that would change the occurrence rates from both these studies.

In any case, it makes sense that these estimates might vary. Dressing and Charbonneau, for example, worked with planetary radii between 0.5 and 1.4 times that of Earth, while Tuomi and colleagues made their calculations based on masses between 3 and 10 times that of Earth, and Tuomi points out that his group couldn’t assess the occurrence rates of planets with masses below 3 Earths because they failed to detect any in their sample. The detection methods, transit and radial velocity, differed, and in any case, the relationship between mass and radius is not well established for super-Earths.

The occurrence rate of low-mass planets in general, however, is high:

We find that low-mass planets are very common around M dwarfs in the Solar neighborhood and that the occurrence rate of planets with masses between 3 and 10 M⊕ is 1.08 [+2.83/-0.72] per star. This estimate is likely consistent with that suggested based on the Kepler results for a sample of stars with Teff < 4000 K…, although the comparisons are not easily performed because we could not assess the occurrence rates of companions with periods up to the span of the radial velocity data of a few thousand days. On the other hand, we confirm the lack of planets with masses above 3 M⊕ on orbits with periods between 1-10 days.

Bear in mind that M-class dwarfs are the most common type of star in the galaxy, perhaps comprising up to 80 percent of the total. The new work gives additional weight to the idea that these stars have low-mass planets around them in abundance, and a high probability of at least a super-Earth class world in their habitable zones. Given our ability to detect low-mass planets around cool stars with both transit and radial velocity methods, their stock can only rise as targets for future searches for Earth-sized planets and studies of planetary atmospheres.

The paper is Tuomi et al, “Bayesian search for low-mass planets around nearby M dwarfs. Estimates for occurrence rate based on global detectability statistics,” MNRAS, in press (full text). Ravi Kopparapu’s 2013 paper is “A revised estimate of the occurrence rate of terrestrial planets in the habitable zones around kepler m-dwarfs,” Astrophysical Journal Letters Vol. 767, No. 1, L8 (abstract). The Dressing and Charbonneau paper is “The occurrence rate of small planets around small stars,” The Astrophysical Journal Vol. 767, No. 1, 95 (abstract).