We haven’t talked much in these pages about atmospheric pressure when it comes to characterizing exoplanets, but recent discussions of ‘super-Earths’ and thick, hydrogen/helium atmospheres have raised the issue. All but simultaneously came the news of a paper from Amit Misra (a University of Washington graduate student) and co-authors describing a new way of detecting atmospheric pressure on exoplanets. Misra’s simulations of Earth’s own atmospheric chemistry involved teasing out the signature of dimer molecules from light at various wavelengths. While a monomer is a molecule that may bind chemically to other molecules, a dimer is a chemical compound made up of two similar monomers bonded together.

Misra’s work is intriguing because the stability of water on a planet’s surface depends not just on temperature but pressure — the latter affects water’s boiling point and sublimation. Estimating surface pressure thus becomes an indicator for potential habitability. The problem is that making the call on pressure in a planetary atmosphere is tricky, involving the widths of individual absorption lines in spectral measurements. What Misra is proposing is to use the distinctive spectral features of dimers — in particular, oxygen dimers — that display their own rotational and vibrational modes that are distinguishable from their constituent O2 molecules. 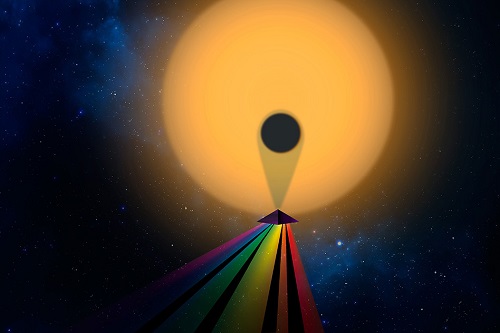 Usefully, the distinctive patterns of dimers are sensitive to pressure, so that space-based observatories like the James Webb Space Telescope should be able to look for their particular absorption pattern, the presence of which, according to Misra, tells us that the planet has at least one-quarter to one-third the pressure of the Earth’s atmosphere. The researcher adds that because oxygen dimer molecules are more detectable than other markers of oxygen, they may play an important role in the detection of potential biosignatures:

“It’s tied to photosynthesis, and we have pretty good evidence that it’s hard to get a lot of oxygen in an atmosphere unless you have algae or plants that are producing it at a regular rate. So if we find a good target planet, and you could detect these dimer molecules — which might be possible within the next 10 to 15 years — that would not only tell you something about pressure, but actually tell you that there’s life on that planet.”

Working with Victoria Meadows (University of Washington), Mark Claire (University of St. Andrews) and Dave Crisp (JPL), Misra simulated both transit transmission spectra (when a planet transits the star and some of the star’s light moves through the atmosphere) and direct imaging spectra, where the planet is observed independently. The fact that dimer absorption features change more rapidly with pressure and density than those of monomers turns out to be most useful when studying the atmospheres of planets around M-class dwarfs, and the team’s work shows that JWST should be able to make such detections for an Earth analog planet orbiting an M-dwarf at a distance of 5 parsecs, allowing us to set a lower bound on pressure.