Just how early we are in our thinking about traveling beyond the Solar System is revealed in a comment made by Ned Wright, principal investigator of the WISE mission. “We don’t know our own sun’s backyard as well as you might think,” said Wright. And he goes on to say, “We think there are even more stars out there left to find with WISE.” That’s a wake-up call indeed given how much WISE has already told us, and what two new studies have brought to light.

Davy Kirkpatrick (Caltech) led one of these, examining data from the Wide-field Infrared Survey Explorer mission that performed two full scans of the sky in 2010 and 2011, capturing images of almost three-quarters of a billion galaxies, stars and asteroids. Analyzing data using NASA’s AllWISE program, which makes it possible to compare the datasets more effectively, Kirkpatrick’s team found 3,525 new stars and brown dwarfs within 500 light years of the Sun.

These objects, says Kirkpatrick, were totally overlooked before now. In any case, the number of stars and brown dwarfs within range of conceivable future exploration is something we have to clarify, building a 3-D map of nearby space that goes beyond the long-identified bright targets like Alpha Centauri and Epsilon Eridani. We’re still learning how many brown dwarfs are out there, and trying to determine not only how they form but how frequently they form planets. Note this from the Kirkpatrick paper: “…both studies missed objects that the other found, demonstrating that many other nearby objects likely await discovery in the AllWISE data products.” 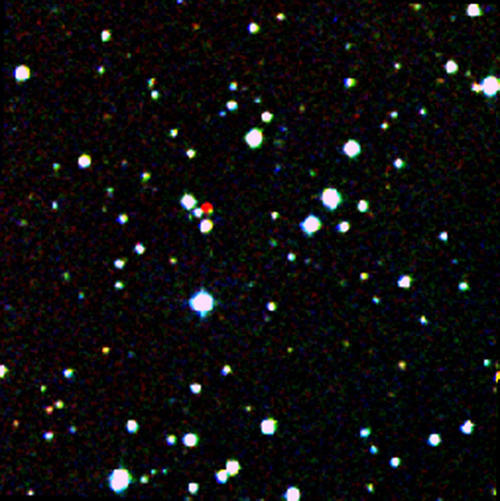 Image: A nearby star stands out in red in this image from the Second Generation Digitized Sky Survey. The star, called WISEA J204027.30+695924.1, was initially discovered using data from NASA’s Wide-field Infrared Survey Explorer (WISE), which scanned the entire sky in infrared light in 2010 and early 2011, before ending its primary mission. Objects that are close to us will appear to move more than distant objects when viewed over time. By comparing images taken by WISE six months apart, astronomers are finding thousands of stars and brown dwarfs in our sun’s “backyard.” The star WISEA J204027.30+695924.1 is a dim star called an L-subdwarf, and is particularly fast moving most likely because it’s old. Older stars tend to have more time — billions of years — to get flung around, and pick up speed. Credit: DSS/NASA/JPL-Caltech.

Penn State’s Kevin Luhman led a second study of the WISE data, cataloging 762 objects (with some overlap with the Kirkpatrick trove). Luhman’s work is getting most of the press because it seems to put to rest the existence of an object many of us had rather hoped to find: Planet X. Call it what you will — Planet X, Nemesis, Tyche — the idea of a large, undiscovered body disrupting the outer Solar System has been around for a long time. Indeed, it was the search for such a body that led to Clyde Tombaugh’s discovery of Pluto back in 1930, although it soon became clear that Pluto wasn’t the much larger object Percival Lowell was hoping to find.

We learn from the Luhman paper that if an undiscovered planet is out there, it’s not a large one. This NASA news release tell us that Luhman’s team can rule out any object larger than Jupiter out to a distance of 26,000 AU, and any object of Saturn size or larger out to 10,000 AU. The interesting idea that a large planet or small star might periodically disrupt cometary orbits in the Oort Cloud takes a hit here, or at least we can say that the new work puts limits on how large such an object could be and how far from the Sun it might exist if part of our system.

Meanwhile, I still find it tremendously interesting that WISE is pulling up stars and brown dwarfs we knew nothing about before, and I’m reminded of the 2013 discovery of the nearby Luhman 16AB, otherwise known as WISE J104915.57-531906, a pair of brown dwarfs some 6.5 light years away. When WISE data revealed this binary, it uncovered the third closest system to the Sun, the closest to be discovered in almost a century. We’re already studying atmospheric features on Luhman 16B, which shows variations in brightness as it rotates. For more on this, see Focus on the Nearest Brown Dwarfs. A possible companion object is also being investigated.