If you’re interested in solar sails and find yourself in California, a stop by UC Riverside’s Tomás Rivera Library should be worth your time. There you will find the Carl A. Wiley collection on solar sails, containing books, manuscripts and various other materials related to sail technologies. Wiley was an aeronautical engineer who wrote the first detailed article on solar sails to reach a wide audience. Evidently concerned about the venue — Wiley’s article had been accepted by John Campbell’s Astounding Science Fiction, which some of his colleagues might not have taken seriously — he chose to write under the pseudonym ‘Russell Saunders.’ 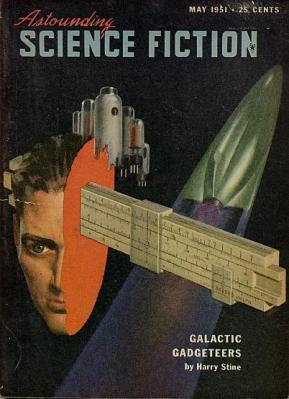 Finding Wiley’s papers at Riverside is perhaps no surprise, given that this is the home of the Eaton Collection of Science Fiction & Fantasy, ‘the largest publicly-accessible collection of science fiction, fantasy, horror and utopian literature in the world.’ Pulp magazine enthusiasts like myself will note that the archive houses full runs of many pulp titles, along with movie scripts, almost 100,000 science fiction fanzines and over 100,000 hardback and paperback books, along with a growing list of manuscripts and papers from authors in the field.

Wiley’s connection with science fiction may have been tenuous, though I suspect he was a regular reader. But editor Campbell loved the sail concept, and “Clipper Ships of Space” appeared in Astounding’s May, 1951 issue. Wiley wrote with a straightforward style for an audience accustomed to much wilder ideas than the momentum of photons pushing a sail up to speeds suitable for interplanetary missions. He notes in his first paragraph that while science fiction had been full of ‘warp drives’ and other exotica, few writers had really explored near-term alternatives to rockets. It seemed time to do so, and as Wiley had been studying these matters throughout the 1940s, he was the right man for the job. His second paragraph reads as follows:

I intend to propose another method of propulsion in a vacuum which is based on present day physics. I will show that in many ways this drive is more practical than the rocket. In order to prove my point I will have to use a certain amount of mathematics. This will permit those who wish to, a chance to check my assertions. The rest may follow my verbal argument which I hope will be fairly coherent without the mathematics.

Wiley had a lot more on his plate in 1951 than solar sails, and we can get a bit of insight into his use of a pseudonym when we put his life at that time into context. He was working at Goodyear Aircraft Corporation (later Lockheed Martin), which despite its history with airships like the USS Akron, had turned to aircraft production during World War II, building the tail assembly for the B-26 Marauder bomber. As the war ended and the Cold War emerged, Wiley led the effort to improve aerial reconnaissance through the development of Synthetic Aperture Radar (SAR), his breakthrough coming at just about the time his solar sail article appeared in Astounding.

Wiley’s work would result in the first synthetic aperture patent just three years later. It was a real breakthrough for aerial reconnaissance considering that higher-resolution radar was needed to see smaller objects at higher altitudes, and Wiley’s relatively detailed imagery could be created with an antenna that was 1/100th the size of the more traditional antennae such details would demand. He called his method Simultaneous Buildup Doppler and saw it lead to decades of further development including live SAR technologies in the cockpit — the imaging radar for the SR-71 Blackbird grew out of all this, capable of identifying objects 30 feet in diameter up to 100 miles away from a height of more than 80,000 feet while traveling at Mach 3.

This Lockheed Martin overview of Synthetic Aperture Radar remembers Wiley as ‘a brilliant if eccentric engineer,’ a term evidently chosen because of his enthusiasm for space technologies like the sail, considering that the following sentence refers to Wiley’s article in Astounding. But over the years we’ve seen Wiley become a part of deep space lore, particularly now that solar sails have become an operational reality. It’s certainly true that he was not the first to discuss solar sails openly — J. D. Bernal had written about space sailing, and Konstantin Tsiolkovsky worked on it in the 1920s. Thinking about their possibilities goes back to Kepler’s day. But few engineers in the 1950s were serious about flying without propellant, which is why I’ll turn tomorrow to the work of two others who deserve our thanks.