Last week I looked at three figures who put solar sails on the map in the 1950s — Carl Wiley, who wrote the concept up in Astounding, Ted Cotter, who analyzed it for colleagues at Los Alamos, and Richard Garwin, who brought solar sailing into the academic journals. It was not long after Garwin’s work that science fiction pounced on solar sails through a cluster of memorable stories beginning with Cordwainer Smith (Paul Linebarger) and “The Lady Who Sailed the Soul.” More about that story and its era soon, including work by Poul Anderson, Jack Vance, and perhaps the best known of all from that era, Arthur C. Clarke’s “Sunjammer.”

But today let’s go way back to what is I think the first story that ever dealt with raw light as a propulsive mechanism. Georges Le Faure and Henri de Graffigny published Aventures extraordinaires d’un savant russe (The Extraordinary Adventures of a Russian Scientist) in three volumes beginning in 1889, with a fourth volume coming out under the promising title Les mondes stellaires (Stellar Worlds) in 1896. This last volume was from a different publisher, which affected its circulation. Let me know if you ever run across a copy — from a collector’s standpoint, it’s by far the hardest of the four to find. 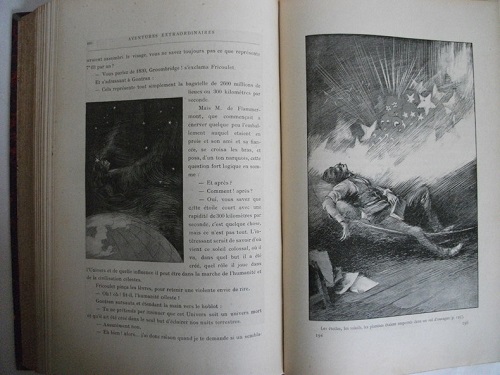 Image: A look inside The Extraordinary Adventures of a Russian Scientist. The illustrations are by the French astronomer Camille Flammarion, who also wrote a preface to each volume. Credit: http://www.livre-rare-book.com/.

It’s fair enough to say that Le Faure and de Graffigny worked in the shadow of Jules Verne, whose From the Earth to the Moon first appeared in 1865, and our authors divide their characters’ exploits into sections on the Moon, the Sun and inner planets, and the outer planets and comets. Like Verne, they imagine sending humans into space using enormous cannons. But unlike Verne, they carry out at least some of their explorations in a hollow sphere that is pushed by the pressure of sunlight concentrated by a huge reflecting dish. Here we might be reminded of something Johannes Kepler said: “Let us create vessels and sails adjusted to the heavenly ether, and there will be plenty of people unafraid of the empty wastes.”

We’re getting into interesting if speculative history. For around the same time that Jules Verne was finishing up Autour de la lune (Around the Moon), first published in 1870, James Clerk Maxwell was developing equations that would show the existence of light pressure. In 1900, the Russian physicist Peter Lebedev, experimenting with beams of light focused on metals of different reflectivity, made the first precision laboratory tests that demonstrated the phenomenon, verifying Maxwell’s predictions. Lebedev’s work is obviously key in the development of solar sails in Russian scientific thinking, but it’s also worth noting that science fiction may have played a role.

I have no hard evidence that Konstantin Tsiolkovsky ever read Le Faure and de Graffigny, but it’s at least a possibility, the major argument against it being lack of access to books, for Tsiolkovsky lived in an isolated town some 200 kilometers southwest of Moscow, and was a deeply reclusive individual. On the other hand, he was well acquainted with Nikolai Fyodorov, a proponent of the Russian space philosophy known as Cosmism, and may well have been exposed to the French writers’ works during time in his youth spent in Moscow. It seems apparent that he knew his Jules Verne, so it’s not too large a leap to Le Faure and de Graffigny’s space travel tales. 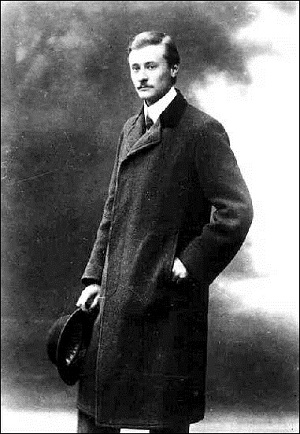 Did the latter influence Tsiolkovsky’s interest in solar sails? For by the 1920s, working with a Latvian colleague named Fridrikh Arturovich Tsander, he began talking about using enormous mirrors crafted into thin sheets that would gather sunlight for propulsion. Tsander was writing about solar sailing as early as 1924, a heritage that may explain the Russian interest in sail technologies that manifested itself in the 1990s Znamya deployments (about which more later).

Tsander is one of those figures who is not as widely known in the West as he deserves to be. He was active in the development of liquid fueled rockets and a founder of GIRD (Group for the Investigation of Reaction Propulsion). It was the GIRD-10, a liquid fueled rocket of his own design, that became the first Russian rocket of its type, although he died before he could see its launch. Early in his life he had become a passionate advocate of space travel, developing equations for a Mars mission while still in Latvia at the Riga Polytechnic Institute.

The young spaceflight engineer would move to Moscow in 1915. Just how energetic he was about space may be gauged by the names of his two children, a daughter named Astra and a son named Mercury. He would found the Society for Studies of Interplanetary Travel, would examine aerobraking to slow returning spacecraft, and be granted a patent for a winged rocket he designed as an interplanetary vehicle. He explored gravity assists for acceleration as early as 1925. The solar sail, it is clear, was but one of Tsander’s many astronautical interests.

I suspect that the French science fiction writers of the second half of the 19th Century were a continuing inspiration for men like Tsiolkovsky and Tsander, even if their job was to translate tales of adventure into concepts in accord with known physics. It’s an intriguing thought that Le Faure and de Graffigny may have spurred the early investigation into properties of light we now know can propel a spacecraft. We can only imagine with what interest both Tsiolkovsky and Tsander would have followed the IKAROS sail, and the upcoming launch of Sunjammer.