Solar Probe Plus: Prelude to ‘Sundiver’?

‘Sundiver’ maneuvers are surely the most extreme events to which we could subject a solar sail. To my knowledge, it was Gregory Benford who first came up with the term — he mentions in Fantasy & Science Fiction that he passed the coinage on to David Brin when Brin was working on the book that would bear its name (Sundiver, published in 1985, would be the first volume in Brin’s Uplift Saga). But Benford credits Brin with the actual concept, which he needed to make his plot work, so it seems best to give credit to both writers for an idea both went on to explore, Benford not only in fiction but in scientific papers as well.

The maneuver is straightforward if breathtaking. Benford explains it in terms of a carbon sail being deployed in low Earth orbit and then launched into deep space by microwave beam:

Consider the sundiving sail. Approaching the Sun turned edge-on (to prevent the increasing flux of sunlight from pushing against its fall), the carbon sail heats up. At closest approach, the craft could turn to absorb the full glare of the intense Sun, gaining a high velocity as it accelerates strongly, under desorption. It exhausts the store of molecules lodged in its fibers, losing mass while gaining velocity. It then sails away as a conventional, reflecting solar sail. Its final speed could be high enough to take it beyond Pluto within five years. There it could do a high velocity mapping of the outer solar system, the heliopause and beyond, to the interstellar medium—the precursor to true interstellar exploration.

So there you are, a fast, propellantless way to do missions to the outer Solar System. But how likely is it that a craft like this would survive a close approach to the solar furnace? To find out just what the parameters would have to be, we need more data from this extreme environment. It’s interesting to note, then, that the Johns Hopkins University Applied Physics Laboratory (APL) is engaged in the advanced stages of design, development and testing of Solar Probe Plus now that its work has received a thumbs up from an independent assessment board.

With a launch set for 2018, the spacecraft is intended to orbit the sun 24 times, assisted by seven flybys of Venus along the way. The craft is going to be moving at extraordinary speeds at its closest approaches, some 190 kilometers per second. Contrast that with Voyager 1’s 17.1 kilometers per second, or the previous record-holder, the two Helios probes, that reached up to 70 kilometers per second. In terms of distance, Solar Probe Plus will take its ten scientific instruments a little more than 6 million kilometers from the Sun’s surface. 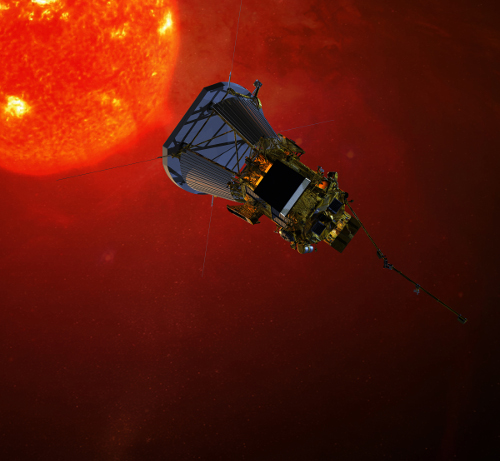 Image: Artist’s impression of NASA’s Solar Probe Plus spacecraft on approach to the sun. Set to launch in 2018, Solar Probe Plus will orbit the sun 24 times, closing in with the help of seven Venus flybys. The spacecraft will carry 10 science instruments specifically designed to solve two key puzzles of solar physics: why the sun’s outer atmosphere is so much hotter than the sun’s visible surface, and what accelerates the solar wind that affects Earth and our solar system. The Johns Hopkins University Applied Physics Laboratory manages the Solar Probe Plus mission for NASA and leads the spacecraft fabrication, integration and testing effort. Credit: NASA/Johns Hopkins University Applied Physics Laboratory.

An extreme environment indeed, with temperatures exceeding 1370 degrees Celsius (2500 degrees Fahrenheit). Solar Probe Plus is equipped with a carbon-carbon composite heat shield designed to withstand these temperatures, not to mention the impacts of hypervelocity dust particles, and the spacecraft’s liquid-cooled system should keep its solar arrays at survivable temperatures through all 24 solar passes. We’ll learn much about the Sun’s outer atmosphere and the solar wind from all this, but I like what NASA’s Lika Guhathakurta threw into the mix:

“Solar Probe Plus is a pathfinder for voyages to other stars and will explore one of the last unexplored regions of the solar system, the solar corona, where space weather is born.”

Guhathakurta is a program scientist at NASA headquarters in Washington who is aware of just how challenging this mission is going to be. As this APL news release notes, we’re talking about going ten times closer to the Sun than the planet Mercury. Amidst everything else we learn, we will have data that can assist in any future sundiver missions. In their book Solar Sails: A Novel Approach to Interplanetary Travel (Copernicus, 2008), Greg Matloff, Les Johnson and Giovanni Vulpetti make the case that a sundiver could reach outbound speeds of at least 120 kilometers per second.

Solar Probe Plus will achieve high speeds as well, of course, but only within the context of operations near the Sun. A true sundiver that used the Sun for a massive gravity assist would attain speeds going outward that could allow it not only to explore the outer planets but reach the Sun’s gravitational focus. “[W]e may view these early efforts as humanity’s first true starships,” the authors write, the beginning of what we can hope is an extended era of exploration.