A Glassy Sea on Titan

The second largest sea on Titan is Ligeia Mare, made up of methane and ethane in a body of liquid that is larger than Lake Superior. Now we have word that the surface of Ligeia Mare is so utterly still that it would appear like glass. The news comes from Stanford University, where geophysicist Howard Zebker had led a new study based on Cassini measurements made in 2013. “If you could look out on this sea,” said Zebker, “it would be really still. It would just be a totally glassy surface.”

Titan seizes the imagination not only because it is planet-like, with seas and a thick atmosphere, but because we know of no other body in the Solar System besides Earth that has a complex cycle involving solid, liquid and gas. Because the thickness of Titan’s atmosphere compromises optical observations, Cassini bounced radio waves off the surface and analyzed the resulting echo. Wave action could be measured by the strength of the returning echo. Zebker explains in this Stanford news release that the echo is analogous to an Earthly lake which, if completely still, would reflect an extremely bright image of the Sun, while a surface in motion would produce a much dimmer reflection. 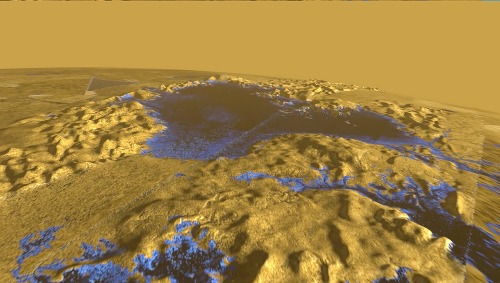 Image: This false-color image of the surface of Titan was made using radar measurements made by NASA’s Cassini spacecraft. The spacecraft revealed that the surface of Ligeia Mare, Titan’s second largest lake, is unusually still, most likely due to a lack of winds at the time of observation. Credit: Howard Zebker.

Given that Cassini’s radar sensitivity is one millimeter in this study, any waves on Ligeia Mare would have to be smaller than one millimeter, which makes for a smooth surface indeed. Cassini’s only comparable observation occurred in a late 2008 Titan flyby that studied Ontario Lacus, with both studies indicating an equally smooth surface. Lack of winds during the time of observation is one explanation for the calm seas, but a layer of material could also suppress any waves. Says Zebker: “[O]n Earth, if you put oil on top of a sea, you suppress a lot of small waves.”

Also interesting here is that radiometry measurements of the terrain surrounding Ligeia Mare show little surface water ice. Instead, the area seems to be made up of solid organic materials, probably the same methane and ethane constituents that make up the sea itself.

Talking about Titan’s seas reminds me inevitably of Michael Swanwick’s Hugo winning novelette “Slow Life,” which ran in Analog in 2002. In it, astronaut Lizzie O’Brien finds herself landing at the shore of one such sea. This snippet gives you the flavor of the story:

“Chemically, the conditions here resemble the anoxic atmosphere on Earth in which life first arose,” Consuelo said. “Further, we believe that such prebiotic chemistry has been going on here for four and a half billion years. For an organic chemist like me, it’s the best toy box in the Universe. But that lack of heat is a problem. Chemical reactions that occur quickly back home would take thousands of years here. It’s hard to see how life could arise under such a handicap.”

“It would have to be slow life,” Lizzie said thoughtfully. “Something vegetative. ‘Vaster than empires, and more slow.’ It would take millions of years to reach maturity. A single thought might require centuries . . .”

What happens next involves unusual dreams, robotic exploratory ‘fish’ and a plunge into liquid ethane. You can track this one down in Swanwick’s short story collection The Dog Said Bow-Wow (Tachyon, 2007). We’re going to get a lot of interesting science fiction as the exploration of Titan continues. Meanwhile, the Zebker paper is “Surface of Ligeia Mare, Titan, from Cassini altimeter and radiometer analysis,” published online by Geophysical Research Letters 30 January 2014 (abstract).