This morning I want to circle around to a story I had planned to write about a couple of weeks ago. One thing writing Centauri Dreams has taught me is that there is never a shortage of material, and I occasionally find myself trying to catch up with stories long planned. In this case, the imaging of an exoplanet around the star Beta Pictoris demands our attention because of the methods used, which involve charge-coupled devices and wavelengths close to visible light. The detection marks real progress in visible light imaging of exoplanets.

The work, which is slated to appear in The Astrophysical Journal, was conducted by researchers from the University of Arizona led by Laird Close. Charge-coupled devices (CCD) are the same kind of technology we find in digital camera imaging sensors, used here in a setting where we’d normally expect an infrared detector. But using infrared means viewing massive young planets hot enough to put out considerable heat. As the exoplanet hunt develops and we push the search for life in the cosmos, we’re after much trickier game, says Close:

“[W]e now are a small step closer to being able to image planets outside our solar system in visible light. Our ultimate goal is to be able to image what we call pale blue dots. After all, the Earth is blue. And that’s where you want to look for other planets: in reflected blue light.” 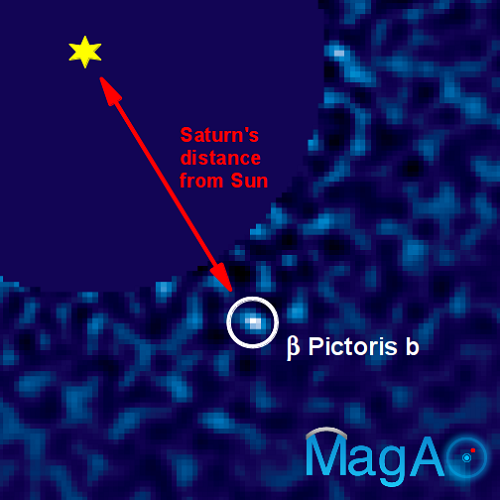 Image: An image of the exoplanet Beta Pictoris b taken with the Magellan Adaptive Optics VisAO camera. This image was made using a CCD camera, which is essentially the same technology as a digital camera. The planet is nearly 100,000 times fainter than its star, and orbits its star at roughly the same distance as Saturn from our Sun. (Image: Jared Males/UA).

Beyond young, hot planets, we’d like to image planets that have long since cooled, the kind of worlds where the passage of time has allowed for the development of life. Beta Pictoris b certainly does not fit that bill, but the technology points in the right direction. Now deployed at the Magellan 6.5-meter instrument in Chile, the system Close and team have developed — Magellan Adaptive Optics — can manipulate a deformable mirror so that its shape changes a thousand times a second in real time, overcoming atmospheric distortion. The team used the MagAO system in tandem with VisAO, a visible wavelength camera. The detection points toward future space-based observatories that can ‘drill down’ to the detection of cooler terrestrial worlds.

“[W]e were able to record the planet’s own glow because it is still young and hot enough so that its signal stood out against the noise introduced by atmospheric blurring,” added lead author Jared Males. “But when you go yet another 100,000 times fainter to spot much cooler and truly earthlike planets, we reach a situation in which the residual blurring from the atmosphere is too large and we may have to resort to a specialized space telescope instead.”

The imaged planet orbits at 9 AU from the host star, a bit closer than Saturn in our own Solar System, and appears 100,000 times fainter than the star. Males describes the image as having the highest contrast ever achieved on an exoplanet this close to its star. That the image was actually that of Beta Pictoris b, an object about twelve times the mass of Jupiter with an atmospheric temperature in the range of 1700 Kelvin, was confirmed using a second MagAO image taken in the infrared spectrum, where the giant world shines much more brightly.

So we’re a long way from directly imaging Earth-like planets around other stars, but tuning up our methods in visible light will eventually pay off with future space-based planet finders. The paper is Males et al., “Magellan Adaptive Optics ﬁrst-light observations of the exoplanet β Pic b. I. Direct imaging in the far-red optical with MagAO+VisAO and in the near-IR with NICI,” accepted at The Astrophysical Journal (preprint). A University of Arizona news release is also available.

Next post: A Dwarf Planet Beyond Sedna (and Its Implications)