Habitability: The Case for F-Class Stars

When it comes to habitable planets, we focus naturally enough on stars like our own. But increasing attention has been paid to stars smaller and cooler than the Sun. M-class dwarfs have small but interesting habitable zones of their own and certain advantages when it comes to detecting terrestrial planets. K-class stars are also interesting, with a prominent candidate, Alpha Centauri B, existing in our stellar back yard. What we haven’t examined with the same intensity, though, are stars a bit more massive and hotter than the Sun, and new work suggests that this is a mistake.

Manfred Cuntz (University of Texas at Arlington), working with grad student Satoko Sato, has been leading work on F-class stars of the kind normally thought problematic for life because of their high levels of ultraviolet radiation. Along with researchers from the University of Guanajuato (Mexico), Cuntz and Sato suggest that we take a closer look at F stars, particularly considering that they offer a wider habitable zone where life-sustaining planets might flourish.

Cuntz thinks the case is a strong one:

“F-type stars are not hopeless. There is a gap in attention from the scientific community when it comes to knowledge about F-type stars and that is what our research is working to fill. It appears they may indeed be a good place to look for habitable planets.” 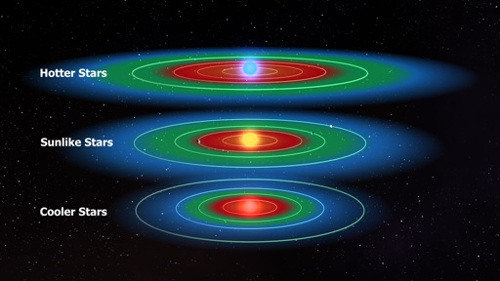 Image: The habitable zone as visualized around different types of star. Credit: NASA.

The team’s paper in the International Journal of Astrobiology makes this argument based on its studies of the damage that ultraviolet radiation can cause to the carbon-based macro-molecules necessary for life. Its estimates of the damage that would accrue to DNA on planets in F-class star systems covered calculations for F-type stars at various points in their evolution. Planets in the outermost regions of the habitable zone experience much lower levels of radiation. This UT-Arlington news release quotes the paper:

“Our study is a further contribution toward the exploration of the exobiological suitability of stars hotter and, by implication, more massive than the Sun…at least in the outer portions of F-star habitable zones, UV radiation should not be viewed as an insurmountable hindrance to the existence and evolution of life.”

F-type stars represent 3 percent of the stars in the Milky Way, as compared with G-class at about 7 percent and K-class at approximately 12. And then there are M-dwarfs, which may account for over 75 percent of all main sequence stars. In any event, the more we widen the prospects for astrobiology beyond stars like the Sun, the more we address the possibility of a galaxy suffused with life, even if we still have no direct evidence. Just as intriguing: If it turns out life is abundant, is intelligence abundant as well?

Previous post: A Dwarf Planet Beyond Sedna (and Its Implications)