The European Space Agency’s Rosetta spacecraft, having traveled for ten years, is on track for its close-up investigation of comet 67P/Churyumov–Gerasimenko to begin later this year. Three years ago we had the first actual image of the comet, a 13-hour exposure taken shortly before the craft entered a lengthy period of hibernation. On the 20th of January, Rosetta was ‘awakened’ and controllers are in the process of commissioning its onboard instruments. As part of the process, we have two ‘first-light’ images taken on March 20 and 21. 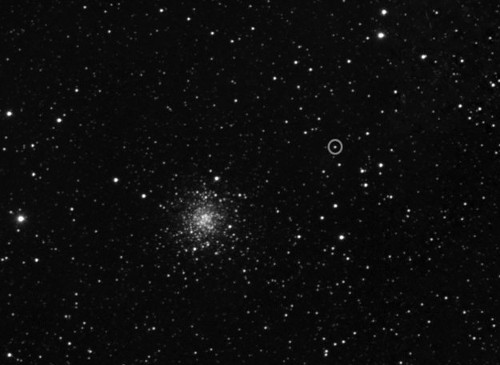 Image: Comet 67P/Churymov-Gerasimenko in the constellation Ophiuchus. This image was taken on 21 March by the OSIRIS Narrow Angle Camera. The comet is indicated by the small circle next to the bright globular star cluster M107. The image was taken from a distance of about 5 million kilometres to the comet. A wide-angle image was taken on 20 March. Credit & copyright: ESA © 2014 MPS for OSIRIS-Team MPS/UPD/LAM/IAA/SSO/INTA/UPM/DASP/IDA.

We’re seeing Rosetta from a distance of 5 million kilometers, from which vantage we see its light in less than a pixel through a series of 60 to 300 second exposures. Even so, the sense of exhilaration in the words of OSIRIS principal investigator Holger Sierks (Max-Planck-Institut für Sonnensystemforschung, Göttingen) is palpable:

“Finally seeing our target after a 10 year journey through space is an incredible feeling. These first images taken from such a huge distance show us that OSIRIS is ready for the upcoming adventure.”

Keep in mind the relevance of Rosetta’s mission not only to the evolution of the Solar System but also to future propulsion ideas. One area of interest is the interaction between the solar wind and cometary gases, needed information as we deepen our knowledge not only of the solar wind itself but how its stream of charged particles might be used in electric and magnetic sail concepts. The solar wind’s variability is one key issue about which we have much to learn.

Rosetta’s studies will be wide-ranging. The spacecraft flies with eleven science instruments onboard, fine-tuned to study everything from the comet’s surface geology to its internal structure and the dust and plasma that surround it. OSIRIS (Optical, Spectroscopic and Infrared Remote Imaging System) has both a wide-angle and a narrow-angle camera involved in the capture of the early images, all part of six weeks of activity as all eleven instruments are checked out for arrival in August.

This ESA news release offers more, noting that on its current trajectory, the spacecraft would pass approximately 50,000 kilometers from the comet at a speed of 800 meters per second. It will be in May that a series of maneuvers are begun to reduce Rosetta’s velocity relative to the comet to 1 meter per second, with the aim of bringing it within 100 kilometers by the first week of August. The re-activation of OSIRIS now gives way to checks on the other instruments as we prepare for what ought to be a memorable encounter. The Philae lander is scheduled to attempt its landing in November.