Reading Charles Adler’s Wizards, Aliens and Starships over the weekend, I’ve been thinking about starflight and cost. Subtitled ‘Physics and Math in Fantasy and Science Fiction,’ Adler’s book uses the genres as a way into sound science, and his chapters contain numerous references to writers like Poul Anderson, Larry Niven and Robert Heinlein. On the matter of speculative propulsion systems, he lingers over fusion and describes the work of Project Daedalus back in the 1970s, when an ad hoc team of volunteer scientists and engineers put together a serious starship study.

Like the vessels written about in the science fiction of that era and before, Daedalus was simply a mammoth craft — 53 million kilograms! — but that corresponded with what SF had been telling us all along. We would travel to the stars aboard vessels not so different from ocean liners, perhaps big enough to be livable on a daily basis, or at least big enough to pack thousands of humans into cryogenic containers for a trip under suspended animation. It’s a natural enough thought: Long journeys demand big vessels. Scenarios like this burn up plenty of energy, as Adler is quick to note:

…the implication of an interstellar probe [like Daedalus]…is that we possess an extremely energy-rich society. The cost of Project Daedalus was estimated at $10 trillion. Using the rule of thumb that prices for everything double every 20 years, the estimate comes in at about $40 trillion today, dwarfing the U.S. GDP. This amount of money is about equal to the GDP of the entire world. Energetics tell us why this is so: the total energy contained in the payload is about 10% of the total world energy usage for one year. This is too expensive for any current world civilization to undertake, and it may well be too expensive for any civilization to undertake under any circumstances.

Adler, a professor of physics at St. Mary’s College in Maryland, is a lively writer who is well versed in both science fiction and fantasy, making this an entertaining volume indeed. He doesn’t mention the ongoing Project Icarus study, but it will be interesting to see how the ensuing years have modified the original Daedalus concept to produce a less costly, more viable design. Even so, the assumption is that a fusion starship as designed today is going to be a large vehicle because it has to deliver enough of a payload to make the journey to the star worthwhile.

Realm of the Small

Enter Alan Mole. A retired engineer, Mole is an aerospace stress analyst who has worked at the University of Colorado Laboratory for Atmospheric and Space Physics, and as a contract engineer for Ball Aerospace, McDonnell Douglas, Pratt and Whitney, Thiokol-ATK and other firms. A recent issue of the Journal of the British Interplanetary Society contains his paper “One Kilogram Interstellar Colony Mission,” which reverses the big starship paradigm and looks to deliver a seriously effective payload at a sharply reduced cost. Mole is, he tells me, interested not only in physically possible ways to solve difficult problems, but also in making the solutions economically feasible. 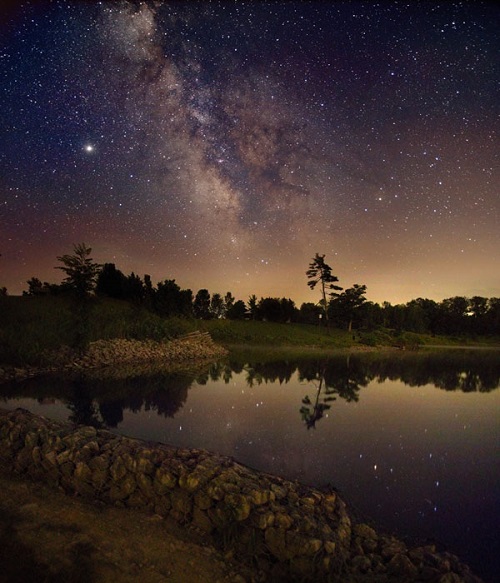 Image: The Milky Way over Ontario. As we ponder a human future in the stars, can nanotech and biology breakthroughs show the way forward? Credit & Copyright: Kerry-Ann Lecky Hepburn.

The difficulty of the problem is hard to overstate. It was not some skeptical bystander but Anthony Martin himself, a major player in the Daedalus design effort, who noted the cost to the society that chose to build Daedalus: “It seems probable that a Solar System wide culture making use of all of its resources would easily be wealthy enough to afford such an undertaking.” But Alan Mole is not the first to point out that we are developing lower cost alternatives. If we can create a smaller payload and find a propulsion method that scales down to meet its requirements, we can start talking about an interstellar effort that would prove economically viable while offering choices for human expansion including interstellar colonization.

If Daedalus totalled 53 million kilograms, Mole thinks we should be looking at a single kilogram as sufficient for our colony probe. Making something like this even imaginable involves advances in artificial intelligence, computer memory, materials science, nanotechnology and biology that we can imagine continuing throughout the century, barring the kind of societal catastrophe that disrupts civilization itself. The kind of probe Mole envisions is a world in itself or, I should say, the seed of a world to come, for it uses technology to raise a human colony at destination:

Consider a one kg colony probe sent to a nearby extrasolar planet at about 0.1 c. It will land and nanobots will emerge to build ever larger robots and greenhouses etc. for colony infrastructure. The nanobots will be powered by batteries and recharged by solar cells, building larger arrays of these as work progresses. They will then hatch human embryos (millions per gram) or build humans directly from DNA formulas stored in memory (as was done for a simple bacterium in the artificial life experiments in 2010.) The probe will transmit no data to Earth but if the colony is successful it will eventually build transmitters and establish contact.

Charles Adler doesn’t suggest science fictional treatments of such ideas, but I know current authors must be working this turf, and I’d appreciate pointers from readers. I’m reminded of Robert Freitas’ ideas about self-reproducing probes, a concept I discussed in Centauri Dreams (the book) in the context of an earlier Freitas idea called REPRO, which involved probes on a Daedalus scale that built replicas of themselves and continued out into the galaxy. By reducing the probe to the size of a sewing needle, Freitas envisions sending just enough nanotechnology to turn assemblers loose at destination to build a station to take scientific measurements, report findings back to Earth and, eventually, move on to another star.

Alan Mole is likewise intrigued by the world of the small, but as the above quote demonstrates, he’s thinking in terms of biology as well. Tomorrow I want to explore the implications of Mole’s thinking, looking first at previous ideas for very small payloads from the likes of Freeman Dyson, Dan Goldin and Gregory Matloff. Then we’ll talk about the propulsion systems that could make such a concept work. For it may not be feasible to carry our propellant with us, opening the door for a variety of beamed energy concepts whose cost is far less onerous than the alternatives.

The paper we’ll be discussing for the next few days is Mole, “One Kilogram Interstellar Colony Mission, Journal of the British Interplanetary Society Vol. 66, No. 12, 381-387.