Reducing the size of a starship makes eminent sense, and as we saw yesterday, Alan Mole has been suggesting in the pages of JBIS that we do just that. A 1 kilogram interstellar probe sounds like it could be nothing more than a flyby mission, and with scant resources for reporting back to Earth at that. But by Mole’s calculation, a tiny probe can take advantage of numerous advances in any number of relevant technologies to make itself viable upon arrival.

Just how far can nanotech and the biological sciences take us in creating such a probe? For what Mole proposes isn’t just an automated mission that uses nano-scale ‘assemblers’ to create a research outpost on some distant world. He’s talking instead about an actual human colony, one whose supporting environment is first guaranteed by nanobots and, in turn, the robots they build, and whose population is delivered through the hatching of human embryos or perhaps even more exotic methods, such as building humans from DNA formulae stored in memory. 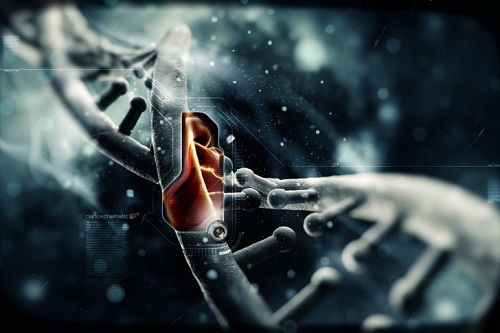 Let’s look at some of the factors the author lists, and bear in mind that we are trying to sketch out the shape of technologies that will have advanced in ways we can’t predict by the time such a probe is ready to fly, even if we allow it the relatively short time-frame (by interstellar scales) of fifty or sixty years of development before launch. From the “One Kilogram Interstellar Colony Mission” paper, here are the key points:

1) Increases in memory density show no sign of slowing. Mole cites small media memory chips that will soon carry two terabytes, but I’d point to Charles Stross’ fascinating discussion of ‘memory diamond,’ which sets theoretical limits on memory density by manipulating carbon atoms. If we need to pack vast amounts of memory into tiny spaces, the future is increasingly bright.

2) Within fifty years, nanotechnology may be able to produce tiny machines — nanobots — capable of complex tasks including self reproduction. The key question then becomes, can such technologies build humans? Mole recognizes the size of the challenge:

“Whether nanomachines can build full humans is unknown. It is physically possible — nature does it when a single fertilized egg cell grows into a human or animal. The DNA of a bacterium has been produced from stored ones and zeros in a computer. Granted, this required a full laboratory of equipment, but in five decades nanobots may be able to do it.”

3) I would feel better about the nanotechnology cited above if we took that fifty year restriction out of the equation, but even without humans ‘built’ by nanotech, we still have the option of sending embryos. Here the relevant citation is a 1989 Japanese project to incubate a goat fetus in an artificial womb, where the fetus grew to birth size but did not survive. Using vast numbers of human embryos on a colony ship, to be raised by robots at destination (robots that have themselves been built by nanobots), allows humanity to spread without large ships and without the need for hibernation (the large ships may be less feasible than the hibernation).

4) That Mole’s proposal is audacious is underlined by the fact that artificial intelligence may be its least controversial feature. Not everyone agrees with Ray Kurzweil that within three decades we’ll be able to essentially duplicate a human mind and run it as a program on a computer. But watching the trends in memory and recent work in brain architecture, including the Blue Brain Project, makes the prospect of uploaded minds at least possible. In any event, we are talking about running some kind of artificial intelligence on tiny CPUs that can manage the activities of nanobots as they build androids that go on to create a human colony. We’re in Singularity territory now, and in the nature of things, that makes predictions tricky indeed.

All of this grows out of a foundation of thinking that combines biology and silicon in interesting ways. Back in June of 1999, then NASA administrator Daniel Goldin spoke before the American Astronomical Society. It had been two years since he announced (in the same year that the Pathfinder probe landed on Mars) that reaching another star would be a new goal for NASA. That was startling enough, but Goldin went on to speak about a combination of lightsail technologies, artificial intelligence advances and hybrid systems tapping advances in biology.

It was an exciting time, even if the interstellar vision was quickly submerged in NASA’s more immediate goals and the ever present challenge of funding work in low Earth orbit. But Goldin’s probe — he described it as a space vehicle about the size of a Coke can — was meant to build itself by scavenging an asteroid, using the abundant supplies of carbon, iron and other materials such an object could provide. Mole’s paper reminded me of Goldin’s quote from that time:

“This reconfigurable hybrid system can adapt form and function to deal with changes and unanticipated problems. Eventually it will leave its host carrier and travel at a good fraction of the speed of light out to the stars and other solar systems… Such a spacecraft sounds like an ambitious dream, but it could be possible if we effectively utilize hybridized technologies.”

With Goldin as with Mole, the intent was to craft a starship without the need to push thousands of tons of payload, using the ability of technology to build and extend itself with local materials. In any case, we’re getting better and better at working with small spacecraft. Consider the Viking landers, each of which massed about 1200 kilograms (the Viking orbiter was 2300 kg). Mars Pathfinder’s lander came in at 100 kilograms, while the Sojourner rover itself massed only 12 kg.

Freeman Dyson laid out a concept for a 1 kilogram probe back in 1985 that set the stage not only for increased miniaturization but the fusion of biology with digital tech. Tomorrow I’ll get into some of Dyson’s ideas as a way of framing what Alan Mole is discussing, and then we need to focus in on the propulsion question. Getting anything — even something as small as a 1 kilogram probe — to another star is an extraordinary undertaking. But finding ways to leave the propellant behind can make it more feasible.

The paper under discussion is Mole, “One Kilogram Interstellar Colony Mission,” Journal of the British Interplanetary Society Vol. 66, No. 12, 381-387.