The Probe and the Particle Beam

For those wanting to dig deeper into Alan Mole’s 1 kilogram interstellar colony probe idea, the author has offered to email copies of the JBIS paper — write him at RAMole@aol.com. For my part, writing about miniaturized probes with hybrid technologies inevitably calls to mind Freeman Dyson, who in his 1985 title Infinite in All Directions (Harper & Row) discussed a 1 kilogram spacecraft that would be grown rather than built. Here’s Greg Matloff’s description of what Dyson whimsically called ‘Astrochicken’:

Genetically engineered plant and animal components would be required in Astrochicken. Solar energy would power the craft in a manner analogous (or identical) to photosynthesis in plants. Sensors would connect to Astrochicken’s 1-gm computer brain with nerves like those in an animal’s nervous system. This space beast might have the agility of a hummingbird, with ‘wings’ that could serve as solar sails, sunlight collectors and planetary-atmosphere aerobrakes. A chemical rocket system for landing and ascending from a planetary surface would be based upon that of the bombardier beetle, which sprays its enemies with a scalding hot liquid jet.

The passage is from Matloff’s Deep Space Probes (2nd ed., Springer, 2006), which goes on to discuss the need to master nanotechnology so that we can manipulate objects on the scale of atoms. He even speculates, citing Alan Tough, that nanotechnology could produce a hyperthin communication antenna for relaying information to Earth from an interstellar probe, constructing it from resources in the destination star system. And he cites Anders Hansson’s 1996 paper in JBIS that sketches an interstellar Astrochicken, one with

…miniaturised propulsion subsystems, autonomous computerised navigation via pulsar signals, and a laser communication link with Earth. The craft would be a bioengineered organism. After an interstellar crossing, such a living Astrochicken would establish orbit around a habitable planet. The ship (or being) could grow an incubator/nursery using resources of the target solar system, and breed the first generation of human colonists using human eggs and sperm in cryogenic storage.

Infrastructure for the Probe

Just as Project Icarus is an attempt to update the Daedalus design of the 1970s, Alan Mole’s work re-examines ideas like these in light of recent work. Yesterday we looked at the trends he thinks make probes with this degree of miniaturization possible. For getting the probe to destination at 0.1 c, he relies on a magnetic sail which draws on studies performed by Dana Andrews in the 1990s. Andrews was talking about a 2000 kg payload, but Mole’s 1 kg payload could be accelerated at 1000 g to cruising speed, with an acceleration distance he calculates at only 0.3 AU, using 1/9th the kinetic energy of the Andrews probe.

To push the magnetic sail a particle beam produced by an accelerator is demanded. Here is Mole’s description:

The probe interacts with the beam by having a magnetic sail, a loop of superconducting wire. This is ejected from the probe and a large current introduced. The magnetic field repels all parts of the wire, so it naturally inflates to a circular loop. For one kg and 0.1 c the acceleration distance is only 0.3 AU and the loop diameter…is just 270 m. After cruise, it is possible to slow the probe by reintroducing a current into the sail and using “friction” from interstellar magnetic fields. This method seems to scale successfully.

The beam generator in Earth orbit would be powered by beamed power from the Earth’s surface. Mole describes the installation as ‘an orbital solar power farm in reverse,’ with the advantage of tapping directly into Earthbound power resources. He points out that NASA drew up studies of a Solar Power Satellite system in 1981, coming in at a cost of about $4 billion to beam power to Earth by microwaves. The Mole plan reverses the process to power an orbital beam generator that would accelerate the magsail, with an estimated beam generator cost of $17 billion. 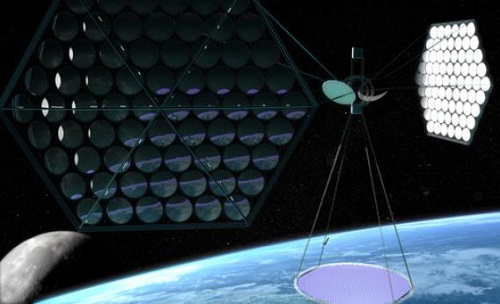 Image: We’ve long imagined beaming power down to Earth to tap the Sun’s abundant energies. But is there a case for beaming power up to drive an interstellar beam technology? Credit: Mafic Studios/National Space Society.

Mole believes the cost of such a beam generator might actually come in considerably lower than $17 billion, but the appendix to his paper shows a wide range of possible costs. In a recent email, Mole wrote me that he is offering a stipend of $5000 (negotiable) for a suitable expert to design and produce cost estimates for the beam generator. Those interested should apply to Mole directly at the email address given at the top of this article. The cost estimates are significant, to say the least, and getting them right should illustrate the value of moving to a smaller probe.

In terms of energy use, by Mole’s figures, a 2000 kg probe of the sort Dana Andrews discussed in his 1994 paper, would require 560 times the US capacity for power generation today. A 1 kg probe would require 28 percent of the US generating capacity, making it far more feasible for a civilization at our stage of development over the next fifty years. The author adds:

Large probes and worldships inspire readers to imagine the vast civilizations that could afford them, but not to start work in hopes of seeing them launched in the readers’ lifetimes. In contrast, a 1 kg probe is plausible for the present civilization. If discussion begins now such a probe could be launched in fifty years.

Sail technologies, whether beamed by microwave, laser or particle beam, come to the fore in discussions like these because we’re already beginning to build experience with solar sails in space. Laboratory experiments have shown that sail beaming works, with the added benefit — shown in Greg and Jim Benford’s experiments — that materials can undergo ‘desorption,’ providing additional acceleration. Now we need to learn how well particle beams can drive a magnetic sail because, like all these sail concepts, this one requires no propellant aboard the spacecraft, a huge plus given the challenge of pushing even a 1 kilogram payload to a tenth of lightspeed.