On the Enceladus Ocean

The recent news about an ocean on Enceladus had me thinking over the weekend about a trip my wife and I took years ago to Michigan’s Upper Peninsula. There we had rented a cabin for the week on the shores of Lake Superior, twenty miles from the nearest town, unless you counted the small grocery store, art gallery and scattered houses up the highway as a town — if so, it was a tiny one. Looking out across the silver and gunmetal gray waves of Superior, you could imagine it an ocean, a cold, frothing place of treacherous currents and, that October, raw winds.

Lake Superior appears as the comparison in many of the reports on the Enceladus findings as they sketch out what appears to be a sea just as large, perhaps ten kilometers deep covered by an ice shell four times as thick. Given that the well known plumes of Enceladus are already known to contain organic molecules in addition to salty water, the inevitable question arises: Could some form of life exist beneath this frozen surface? There’s no way to tell as yet, but the imperative to probe still further into the tiny world (504 kilometers in diameter) continues to grow. 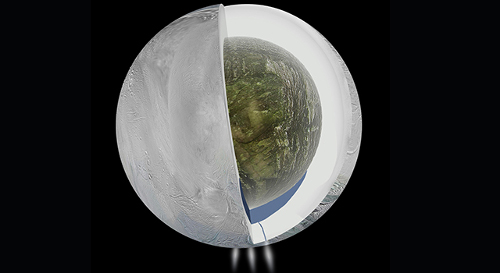 Image: This diagram illustrates the possible interior of Saturn’s moon Enceladus based on a gravity investigation by NASA’s Cassini spacecraft and NASA’s Deep Space Network, reported in April 2014. The gravity measurements suggest an ice outer shell and a low density, rocky core with a regional water ocean sandwiched in between at high southern latitudes. Views from Cassini’s imaging science subsystem were used to depict the surface geology of Enceladus and the plume of water jets gushing from fractures near the moon’s south pole. Credit: NASA/JPL-Caltech.

What we have in the latest work is the result of three Cassini flybys, two of them over the southern hemisphere, one over the north. The tiny deviation of the spacecraft from its trajectory — the velocity change was 0.2–0.3 millimetres per second — could be detected in Cassini’s radio signals, helping us measure variations in the gravity of the tiny world. The payoff is explained by Luciano Iess (Università La Sapienza, Rome), lead author of the paper in Science:

“By analysing the spacecraft’s motion in this way, and taking into account the topography of the moon we see with Cassini’s cameras, we are given a window into the internal structure of Enceladus. The perturbations in the spacecraft’s motion can be most simply explained by the moon having an asymmetric internal structure, such that an ice shell overlies liquid water at a depth of around 30–40 km in the southern hemisphere.”

These measurements are extraordinarily fine, but analysis of the Cassini signal can detect changes in velocity as small as 90 microns per second, according to this JPL news release. Although the southern polar region has a surface depression that affects the local pull of gravity, the magnitude of the gravitational dip is less than it ought to be given the size of the depression, which leads to the finding that a high density feature beneath the surface is the cause. Denser material, probably liquid water, compensates for the missing mass. This water may or may not be the source of the south pole plumes Cassini has observed in the past, but that possibility certainly exists.

Meanwhile, I’m recalling an earlier encounter with Enceladus. Freeman Dyson was talking about the moon as a target for the Orion spaceship in the late 1950s, and in a twelve-page report in 1958 called “Trips to Satellites of the Outer Planets,” he made the case for visiting the gas giant moons. Decades later, he would explain his thinking to his son George, as recounted in the latter’s Project Orion: The True Story of the Atomic Spaceship (Henry Holt, 2002):

“We knew very little about the satellites in those days. Enceladus looked particularly good. it was known to have a density of .618, so it clearly had to be made of ice plus hydrocarbons, really light things, which were what you need both for biology and for propellant, so you could imagine growing your vegetables there. Five-one-thousandths g on Enceladus is a very gentle gravity — just enough so that you won’t fall off.”

Amazing to recall that, at least for a time, the motto of Project Orion was “Saturn by 1970.” But it’s clear from everything we’ve learned about this moon since that Enceladus remains a primary object for study, even if we’ve now moved into the realm of astrobiology. What a surprise that would have been to the Orion team back in the 1950s!