Some mission concepts for interstellar flight demand equipment that can stay functional not just for decades but for centuries. Do we know how to build such things? Missions like Voyager are encouraging in that we have two spacecraft that were never built for the kind of longevity we’ve demanded of them, and we’re still tracking their signals. But as Robert Forward once speculated, the problem may not be just in building the spacecraft, but in how we handle them.

Forward’s issue involved the changes on Earth that might occur over a long-duration spaceflight like the one he envisioned in Rocheworld (1984, first published as Flight of the Dragonfly). A crewed starship is actually on the way to Barnard’s Star, dependent on the massive laser installations in the Solar System whose beam will allow it to decelerate (through ‘staging’ the sail) into the destination star system. But there is a movement afoot on Earth to shut down the beam, motivated by money, politics and the usual cast of miscreants. The technology, in other words, works, but the question is whether the humans behind it will make the right decision. 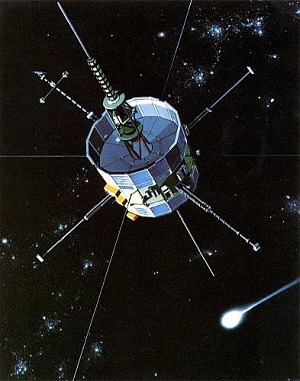 Much goes on in Rocheworld and the question of shutting down the laser is but a minor theme, but the question Forward raises is intriguing. Consider what’s happening with the International Sun-Earth Explorer-3 (ISEE-3), a spacecraft launched in 1978 to make observations of the solar wind’s interactions with Earth’s magnetosphere. Back in 1983, ISEE-3 turned into ICE, the International Cometary Explorer, and in that guise studied comet Giacobini-Zinner and later Halley’s comet. NASA even turned the craft loose after that to study coronal mass ejections before decommissioning the probe and closing down its systems.

This August, as the Planetary Society’s Emily Lakdawalla has noted, the spacecraft in its heliocentric orbit will be catching up with the Earth from behind, which creates an interesting issue of its own. Although officially out of service, ISEE-3 has been broadcasting a carrier signal that was detected in 2008. It’s also known that as of last check — this was some time in the 1990s — twelve of its thirteen instruments were still working. Could we get the 36-year old spacecraft back in service? It’s a compelling thought, but a tough task to accomplish.

Image: The ISEE-3/ICE spacecraft. Can it be returned to use? Credit: NASA.

The problem isn’t with the data from the spacecraft, which can be accessed by the Deep Space Network. The issue is our ability to talk to the probe. The Goddard Space Flight Center team responsible for the craft maintains a Facebook page, from which Lakdawalla quotes:

The transmitters of the Deep Space Network, the hardware to send signals out to the fleet of NASA spacecraft in deep space, no longer includes the equipment needed to talk to ISEE-3. These old-fashioned transmitters were removed in 1999. Could new transmitters be built? Yes, but it would be at a price no one is willing to spend. And we need to use the DSN because no other network of antennas in the US has the sensitivity to detect and transmit signals to the spacecraft at such a distance.

However, all hope is not lost. ISEE-3’s signal has been detected by the Allen Telescope Array as well as by radio amateurs, and scientists at the Applied Physics Laboratory are studying potential new, lower-power ways of contacting the probe, as Lakdawalla reports in a later update. If the craft’s engines can be commanded to fire, it could be recaptured into a halo orbit at the L1 Lagrangian point and returned to service. The odds are long and time is short — the engine firing needs to be accomplished no later than early June — but the fact that the APL team is actively working on this inspires me to keep an eye on the ISEE3returns Facebook page.

ISEE-3 is not, obviously, a manned mission, so the question of reactivating it has none of the life-or-death drama of the Forward novel. But it’s an interesting commentary on how our technology can sometimes expose our weaknesses. In this case, we have a functioning spacecraft that could conceivably come back into use, one that is for now rendered impotent until we can pull the resources together to use it. The cost factor speaks for itself, and it’s understandable. But I’m reminded of our problems reading old data from the Pioneer days because the equipment has become obsolete. Truly long-term thinking involves planning for changing formats and technological upgrades, a subject about which we’ll be learning much more as we contemplate deeper and longer missions into the dark between the stars.